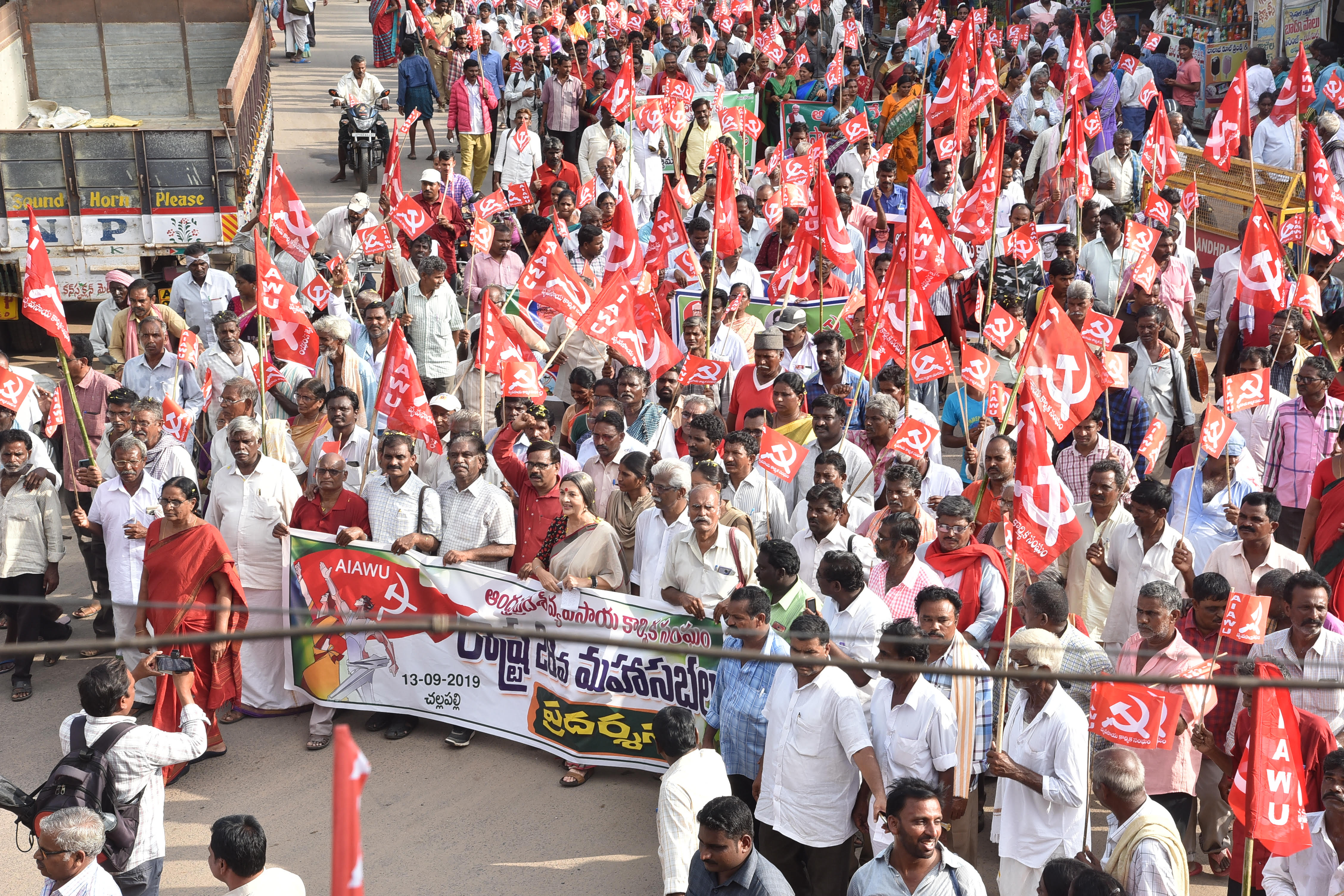 “FEUDAL landlords exploited the people in the olden days and now the capitalist landlords and neo-rich in the rural areas are snatching the land from the poor”, speakers in the agricultural workers rally lamented at Challapalli in Krishna district on September 15. The rally was held after the 28th state conference of Andhra Pradesh Agricultural Workers Union, which was held from September 13-15.

Brinda Karat, member of the CPI(M) Polit Bureau, greeted the gathering and spoke about the heroic struggles led by the united Communist Party in the region against the Challapalli zamindars. She also mentioned about the sacrifice of Ginturu Bapanaih who hails from that region. The birth centenary celebrations of Bapanaiah are also going on in synchronisation with the conference.

A Vijaraghavan, general secretary of AIAWU criticised the central government for not allocating sufficient funds for the welfare of SC, ST, OBC, Minorities and for women, rather, he said the government is more interested to talk about well being of cows. He ridiculed the government policies of reversing the land reforms and further pauperising the rural people.

P Ramaiah, former president of AIAWU, V Srinivasarao, former secretary of AP Rytu Sangham, B Venkat, vice president of AIAWU, D Subbarao and V Venkateswarlu the state president and secretary respectively, spoke on this occasion. K S Lakshmanarao, MLC from Graduate constituency addressed the rally and Sarojini, daughter of Comrade Bapanaih greeted the masses. People in a big numbers attended the rally and voiced their resentment against the policies of the government that causes hardships to them. The conference re-elected Subarao and Venkateswarlu as new president and general secretary respectively.

FIGHT BACK POLICIES OF DILUTING THE ICDS

AR Sindhu, general secretary of All India Federation Anganwadi Workers and Helpers(AIFAWH)  gave a call to fight back the evil policies of central government that has been diluting the ICDS and thus hampering the interests of poor. She inaugurated the state conference of Andhra Pradesh anganwadi workers and helpers union at Sattenapalli of Guntur district on September 14. She narrated the struggles of anganwadi workers and helpers in various states to protect their job security and to protect the ICDS. She explained the odds that have been faced by the anganwadi workers in West Bengal and Tripura. K S Lakshmanarao, MLC and the president of reception committee welcomed the gathering. Local MP and MLA Srikrishna Devarayalu and A Rambabu greeted the delegates and assured to sort out the problems of anganwadis by taking them to the chief minister. The conference culminated with a mass rally on September 15 and re-elected G Babyrani and K Subbaravamma as new president and general secretary respectively.