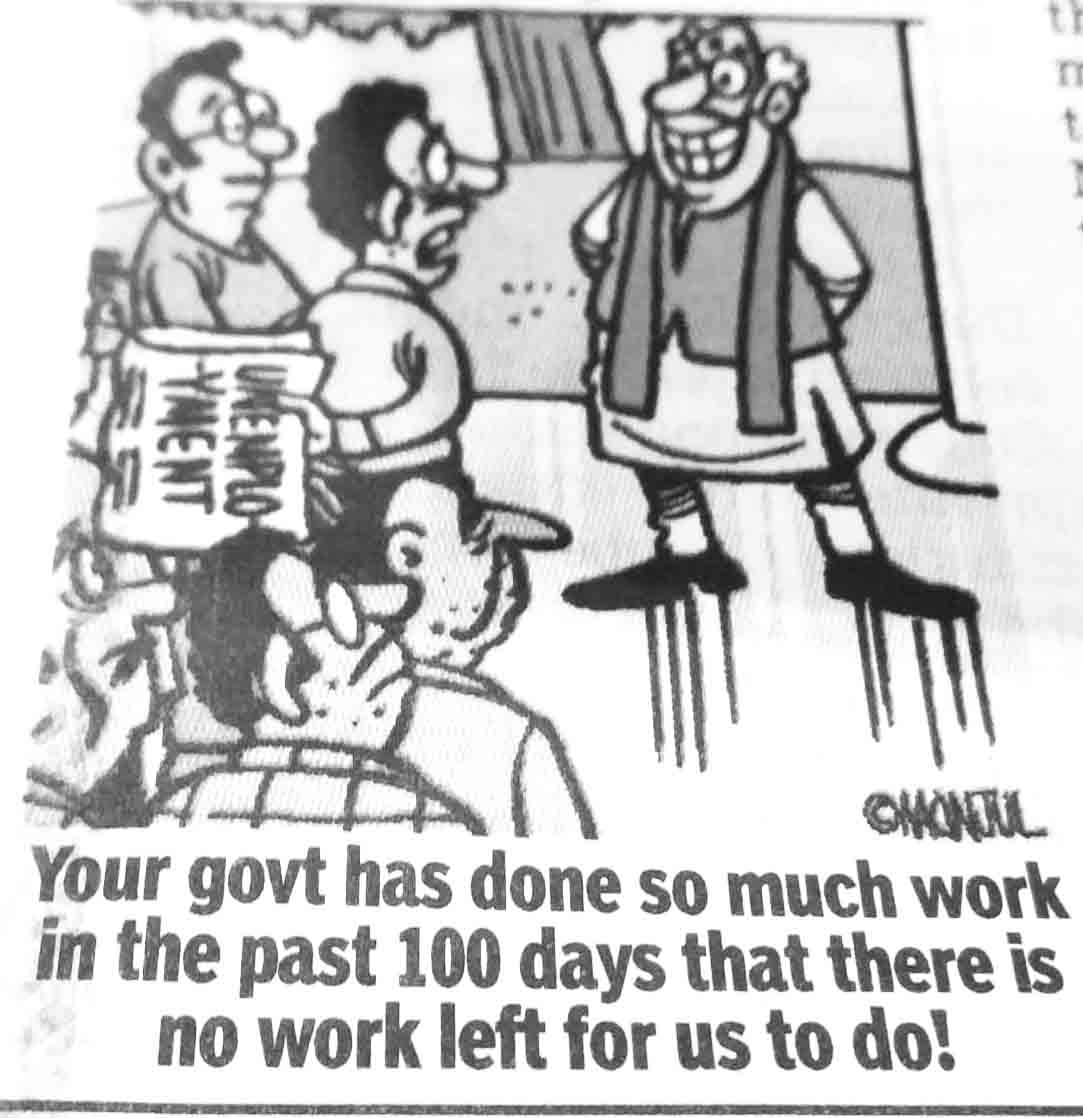 INDIA is in the grip of a deep economic crisis, the depth of which is being under-estimated by mainstream media, apologetic economists and, of course, by the ruling government itself. What is officially known and analysed are things like the dip in economic growth (it is down to 5 per cent), declining investment, stagnating bank credit, fall in private consumption expenditure and other such macro-economic indicators. These are important and must be analysed because they prick the dream balloon of India becoming a superpower with a $5 trillion economy in the near future.

But what all these figures and analyses are not really estimating is the nature and scale of devastation caused by Modi’s economic policies. This becomes clear when you start looking at the effects of the current slowdown on the people of India – the agricultural workers and small/marginal farmers, miners, construction workers, industrial workers, employees in services sector, informal workers etc. In short, it is the working people of India whose lives – already under huge stress due to years of stagnant incomes and lack of jobs – have experienced a sharp turn for the worse.

Although people were already suffering from lack of job opportunities and low incomes, in the recent months, the situation has worsened because existing jobs are being snatched away. Meanwhile, growing unemployment has further depressed wages. In agriculture, already stagnant agricultural wages are now facing the prospect of decline because those who lost jobs in non-farm employment are rushing back to villages and seeking whatever partial employment they can get. It is a deadly cocktail of declining jobs and incomes that the country’s working people are facing. Media and analysts are parroting the lamentations of industrial lobbies who are simply wanting the government to help them maintain their threatened profits. But the real pain is in the homes and hearths of the people.

Although the automobile industry, estimated to employ some 3.7 crore workers, has drawn much attention after industry bodies claimed that about three lakh jobs have been lost, and a prospect of a total of 10 lakh jobs being lost stares in its face, even this does not tell the whole story. There are lakhs of jobs that are associated with any big industry, both upstream and downstream. Thus, a slowdown in the auto sector also means a lack of demand in various upstream sectors that feed it: steel, precision engineering, electronic instruments, rubber tyres and many other smaller industries. There are reports, collected by CITU, from different parts of the country that job losses are sweeping in all these. Such a slowdown and loss of jobs has been reported from Uttarakhand, Haryana, Uttar Pradesh, Jharkhand, Madhya Pradesh, Maharashtra, Karnataka, West Bengal and Tamil Nadu.

These job losses are of two kinds: one, when contract workers are simply told to quit; and two, when the unit cuts the number of working days as has happened in many units of Maruti, Ashok Leyland etc. The result is that either one loses the job or one’s monthly income goes down by a third or even by half. Either way, it is a big blow to the worker and his family. As it is, the earnings are in the range of Rs10,000-15,000 per month. To cut it by a third would reduce the family to subsistence level, with nothing left for schooling, health needs or support to aged parents in the village.

The huge mining sector is going into a slowdown with an estimated 2-3 lakh jobs expected to be lost in the coming months. Although industry bodies are blaming the government for non-renewal of mining licenses or not holding auctions, the real reason is that the lack of demand has forced everybody involved to go slow. Inventories are piled up and offtake is slowing – so employers are trying to save their profit margins by cutting workforce or reducing workdays.

It is noteworthy that in the midst of this crisis, the government announced that it would allow 100 per cent FDI in coal mining. This is Modi government’s way of using the crisis to further give concessions to domestic or foreign capital. This move is likely to cause more job losses and further decline in incomes of coal workers. Over five lakh coal workers are proposing to go on strike on September 24, to resist this move.

Steel sector was mentioned above as an upstream link to the auto sector. But this crucial industrial sector has also gone into a slump because demand for steel has dipped all round. Besides the sinking auto sector, other users of steel like railways, construction, engineering etc are in a slowdown mode and so even Tata Steel, the biggest private steel maker, has had to announce a Rs 4000 crore cut in its capital expenditure plan recently. That means it is unwilling to expand productive capacities – so no new jobs.

There are reports from Jharkhand and Odisha that over one lakh jobs have been lost in all the ancillary industries of steel in and around Jamshedpur. Just as in the auto sector, there are dozens of types of industrial units that manufacture and sell various goods to the steel giants.

The textile industry – in all its shades, from big mills to powerlooms and handlooms – is going through its biggest crisis in decades. It employs upto 10 crore persons but may face job losses running into lakhs as mills are reportedly running at two third capacity. Lack of demand for cotton yarn in both domestic and global markets is the reason why this crisis has hit the sector. Again, this will have severe repercussions upstream and downstream. With a bumper cotton crop this year, valued at Rs 80,000 crore waiting to be bought by the spinning mills, the slump is going to depress cotton prices forcing farmers into ruin. Similarly, ancillary industry – machinery makers – will be hit, causing more job losses.

Road transport industry, that includes mainly truckers but also lighter goods vehicles, has been severely hit because of slowing industrial output. It is estimated that nearly 60 per cent of the over one crore trucks are standing idle currently. That means loss of earnings for all the workers associated with the trucking industry like drivers, helpers and the army of repair workers and loading-unloading workers. The woes of this industry have been aggravated by the new laws relating to motor vehicles which not only inflict huge penalties for traffic violations but also squeeze the smaller operators giving advantage to big companies.

Construction and real estate sector which used to be the fallback option for those who could not find employment in any other sectors has been in the grips of a crisis for over a year now but the crisis is set to become much worse. According to the National Real Estate Development Council (NARDECO), at least one lakh jobs have been lost till now and another five lakh jobs will go in the next few months. Most of these jobs are low paying and casual or contractual although there are reports that even office employees are losing jobs.

As with other sectors, this slowdown in the construction sector has major consequences for associated industries, especially steel, cement, paints, electric goods and transport. All of these are reporting a downturn and loss of jobs.

IT sector, one of India’s celebrated achievements with a major export orientation, has also started suffering with job losses of up to 65,000 already reported from Bengaluru, the hub of IT industry. All the major IT and ITES companies are getting rid of employees as orders decline, both domestic and foreign.

This snapshot of recent job losses should be seen in the context of the raging unemployment that has already existed in India for the past several years, and has in fact been growing rapidly. According to the latest CMIE data, the monthly unemployment rate stood at a staggering 8.37 per cent at the end of August 2019, the highest in several years since CMIE started tracking it. Considering the fact that the Labour Bureau’s official report released in May this year put 2017-18 unemployment of 6.1 per cent at a 45-year high, the CMIE data surely points to an all-time high for joblessness.

This unemployment is in both urban and rural areas and it is across sectors. Notably, it is much more for women than for men, indicating that women workers continue to bear the brunt of this economic disaster unleashed by the present government’s policies.

Some of the recent job losses would be reflected in this data but most of it would not be because a significant part of it is disguised unemployment. If a worker is told to go back to his village for a month, with the false assurance that he/she will be called back after that, it is likely that the worker will not be counted as “unemployed”. In other words, the real unemployment situation is likely to be much worse than this.  Still, the picture presented by the above chart is very dire and gives a glimpse of the kind of destruction caused by Modi’s economic policies.

To understand the real depth of the economic crisis, it is necessary to understand that it is arising out of depressed demand. There is very low purchasing power in the hands of people because of stagnating wages, low returns for farmers, persistent unemployment and the twin shocks of GST and demonetisation that destroyed MSMEs which are big job creators. The Modi government has not stepped in with increased public spending to ameliorate this distress because of its dogmatic commitment to neoliberal policies which dictate curtailment of government spending while allowing private sector expansion.

So, because of low purchasing power and consequent low demand, many other sectors of the economy, particularly consumer goods have come under stress. The best example of this is the case of Parle-G biscuits which sells at Rs 5 a pack. Parle company has announced that it is facing a slump in its sales. Similarly, thousands of other mass consumption goods producers – from cosmetics to eatables, from underwear to utensils – are facing dipping sales. This has the direct result of the manufacturers cutting production and taking other measures to save their profits. The first thing that they do is cut jobs and wages. This in turn further reduces purchasing power of the people. This is the vicious cycle that the country is currently sinking into.

There is only one way out of this. That is to force the government to drastically change its policies, step up public expenditure not only for providing relief through various schemes but by investing in job creation, in giving farmers better prices, in increasing wages and thus putting money back into the hands of people. This will break the vicious cycle, kick start the economic activity by raising demand which in turn will push up production and thence employment.

The government is, however committed to the very reverse. It is using its resources to help the private sector through more and more concessions, it is keeping wages low (remember the Code on Wages?) it is refusing to increase MSPs and strengthen the PDS. In fact, it is using this crisis to further enrich the already rich. Only extensive resistance to such policies is going to force the government to change its policies.