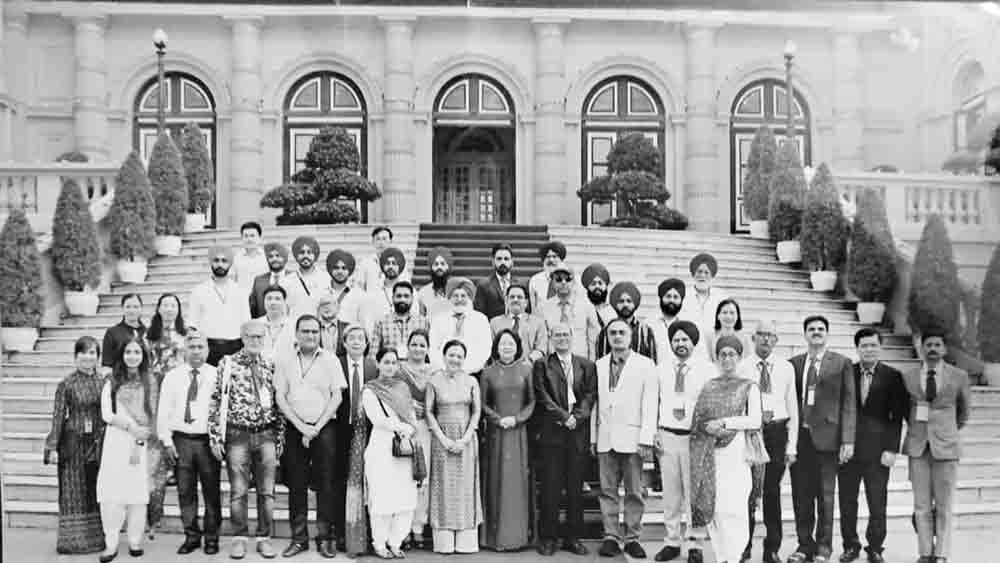 THE week-long 10th India-Vietnam People’s Friendship Festival was held in Vietnam from August 12-18, 2019. The delegation consisted of a 14-member team of professors, lawyers, writers and social workers and another 13-member cultural team to present culture of Punjab to Vietnamese people.

All India Peace And Solidarity Organisation (AIPSO) general secretaries Pallab Sen Gupta, R Arun Kumar and another member from the headquarters, Sadashiv were part of the delegation.

People of my generation know Vietnam as a country which defeated the all powerful imperialist force, America, in a war that lasted for more than a decade, under the leadership of great revolutionary Ho Chi Minh whom UNESCO recognised as a ‘national emancipation hero and great man of culture’. Ho Chi Minh got tremendous international support so much so that  students, teachers and intelligentsia in America also held demonstrations against their own government for its war on  Vietnam . They could ultimately win the war and achieve unification of North and South Vietnam. The students and youth at Calcutta also held protest demonstrations against America and coined the slogan ‘Tumhra Naam, Hamra Naam – Vietnam, Vietnam’ (your name, my name – Vietnam, Vietnam) which later on spread all over India and resonated  as   ‘Mera Naam Tera Naam – Vietnam, Vietnam’.

It was due to this reason that we were thrilled to get a chance to visit the land whose people had  defeated the imperialist power , America.

On the first day, we met Dang Thi Ngoc Thinh, member of Party Central Committee, vice president of Vietnam at the Presidential Palace which is a rare piece of French architecture. There were no security people anywhere in sight.  The staff of the vice president office received us warmly. Within a few seconds, the vice president entered the hall and greeted the delegates. She welcomed the delegation and explained the cordial and deepening relations between India and Vietnam since 1976. She made a specific mention of role played by India at the time of Pandit Jawahar Lal Nehru in supporting Vietnam in the war against America. She made a special mention of Calcutta rally of more than 10,000 people.  She mentioned many sectors like technology, agriculture, industry etc where the two countries can have cooperation. On behalf of the AIPSO delegation , Pallab Sen Gupta thanked the vice president and assured that India would always strengthen people to people relations with Vietnam irrespective of the government at the centre. The vice president presented a memento to the leader of the delegation, Pallab Sen Gupta. On behalf of Punjab delegation, Harchand Singh Baath, RL Moudgil , Jaspal Singh Dapper and Inderjit Singh  presented a replica of Golden Temple to her. She with her officers had a group photo with the delegation in front of the Presidential Palace.

On August 13, we visited the Trang-A Landscape Complex which is designated as World Heritage by UNESCO.  A lake moves between high beautiful hills on both sides and passes through 48 small and large tunnels measuring between 50 and 300 metres.

The leader of Ninh Binh Provincial People’s Committee hosted a reception. Nguyen Phuong Nga, chairwoman of Vietnam Union of Friendship Organisation (VUFO) applauded the role played by India in the freedom struggle of Vietnam and after independence in the overall development of Vietnam . Pallab Sen Gupta thanked the Ninh Binh government for the warm reception and spoke about the deepening relations between the two countries.

Ninh Binh Province incharge of VUFO and vice president, Vietnam India Friendship Association (VIFA), and the Indian delegation highlighted the importance of the Vietnam-India festivals in cultural relations. Thereafter the Indian cultural team performed dance and made the audience sway to the beats of the Dhol.  The Vietnamese artists also presented wonderful performances.

Cordial and fruitful discussions were held between the Vietnam and Indian delegations on various issues at the friendship talk held on August 14. Besides the VUFO and VIFA representatives, three former ambassadors to India were present in the meeting. There was a consensus that small delegations like doctors, agricultural scientists, educationists, economists etc should visit each other regularly in addition to the big delegation that visits at the festival time.

Later, a commemoration meeting was held to mark the birth centenary of Comrade Romesh Chandra. Speakers from both India and Vietnam explained the role played by him for the peace movement all over the world in his capacity as leader of the AIPSO and then the World Peace council .

It was a proud moment to celebrate our Independence Day in a friendly nation and that too organised by our hosts. We were surprised to find a group of Indian navy officers with their  families including a Punjabi officer at the theatre in the festival on August 15. The Indian, Vietnamese artists gave good performances for more than two hours on the day. Representatives of AIPSO, VUFO and VIFA spoke about the freedom struggle of India. On August 17, the delegation met the leader of Ho Chi Minh City and exchanged views on various issues to promote trade, culture and people to people co-operation .

The delegation met Indian businessmen in HCMC. Indian Consulate General, Reddy was also present. VIFA, AIPSO and the Indian Business Chamber in Vietnam (INCHAM)  representatives shared their views and experiences and made suggestions to further strengthen our relations in all sectors. The consulate general also briefed about the latest developments after the visits of the Indian prime minister and the president.

The Indian and Vietnamese Cultural team artists presented mesmerising performances at the University of Social Sciences and Humanities at the end of the day. The VUFO and VIFA leaders spoke on this occasion about India and Vietnam relations and significance of the festival.

On the last day, the delegation visited the Cu Chi Tunnels, situated in deep forest areas in rural Vietnam, about 60 kms from the Ho Chi Minh City. Here lies the secret of the war strategy. There were underground kitchens, water storage, sleeping rooms, meeting rooms, schools, theatres and even hospitals for injured soldiers. The French and Americans could not know from where the guerillas attacked. There were 30,000 guerillas and 30 per cent of them were women. We saw the hospital in a tunnel, a meeting room for about 50 officers, Morse system for telegram, typewriters etc. We also noticed the impact of globalisation on Vietnam. They had to invite foreign investment in some sectors and it is visible.

The Vietnamese have been excellent hosts. Almost every major city in the country is on the bank of a river and lakes. The rivers and lakes are so clean and well maintained and are used as tourist spots. There is 100 per cent education and if some poor people are unable to send their wards to school, the teacher will go their homes to teach. Health centres are available in rural areas but our VIFA leader told that our effort is to see that nobody falls ill. There is equal participation of women in every field. We did not come across a single beggar in four state capitals and national capital, not even at temples.