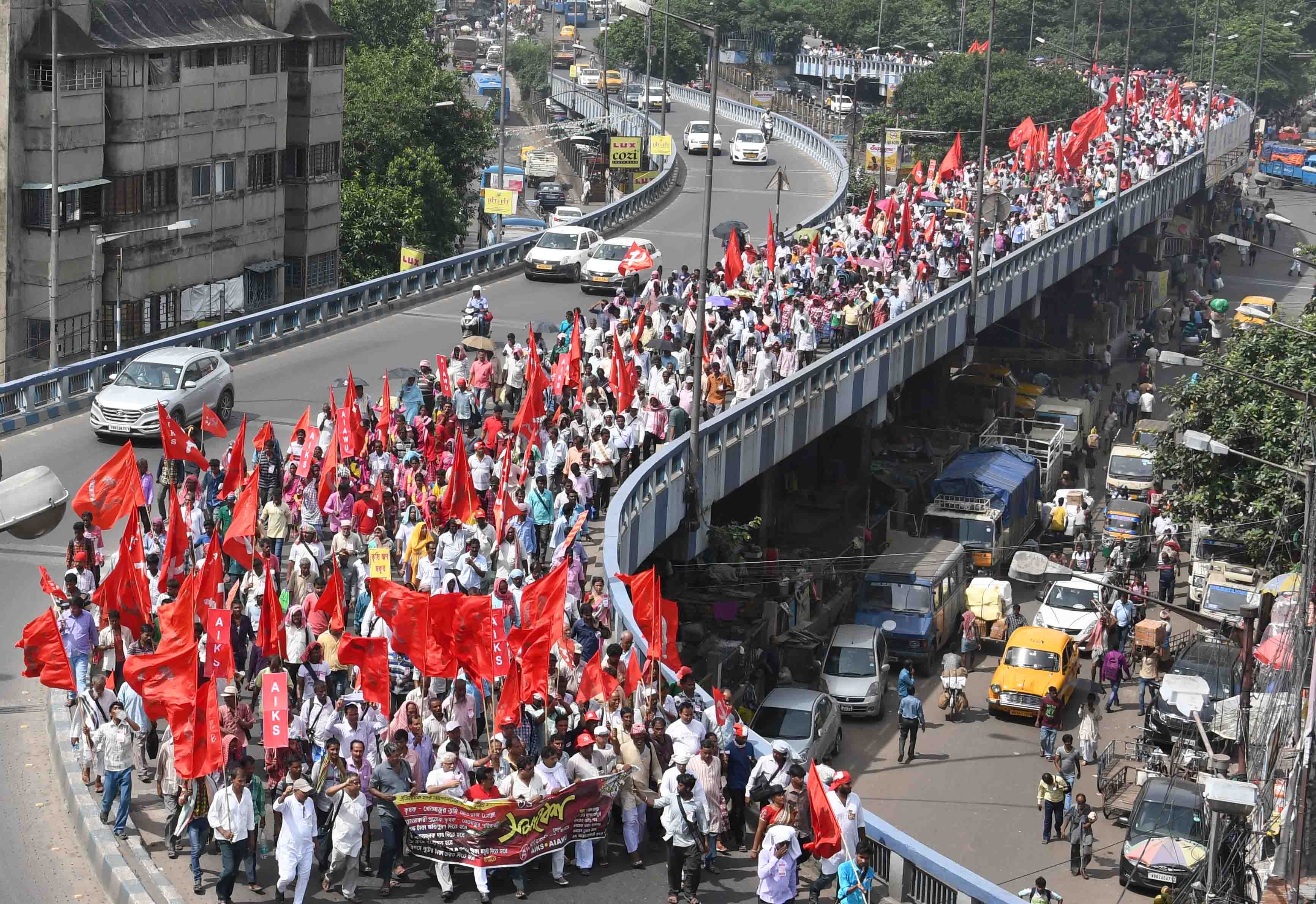 ON AUGUST 31, a strong rally of the agricultural workers was held in Kolkata to infuse fighting spirit within agriculturalists of the country. Over 50,000 farmers and agricultural workers, at the call of AIKS and AIAWU,  mobilised at the heart of Kolkata, at Rani Rashmoni Avenue, demanding an end to the anti- peasantry mindset of the Modi led union government, which they told is being supplemented by the  Mamata led TMC run state government in West Bengal.

Processions originating from Howrah and Sealdah stations started flowing to the heart of the city  as  the determined agriculturalists clinging to the red flag, walked in unison, demanding allocation of MSP  and eradication of TMC hooliganism, who work as fleecing middleman in the agri-commodity trade in the state, exploiting the  primary  producers.

The  angry mindset and the hatred of the farmers towards the perpetrators could easily be felt  as the  entire assemblage raised slogans vigorously when AIKS general secretary,  Hannan Mollah, said that on the one side there is a government for the criminal, by the criminal and of the criminal in West Bengal, and in the  centre a government by the communal forces, for the communal forces  and of the communal forces; both are exploiting millions of  agriculturalists in the country . He also pointed out that in case of any product sale, the sellers control the capacity of deciding upon the price of the produce, except in the case of peasants, who have to depend on external influences to set up the price. This is wrong, he said and pointed out that the M S Swaminathan  Commission’s formula of C2 + 50 per cent as the MSP,  instead of the present A2 + FL  formula  should be applied in deciding the MSP of the produce.

“Let us bring all the agriculturalists under the kisan identity, which is better humane identity than that of religion, caste or creed based identity and which can unify the country and has got the capacity of shaking the  entire establishment, who are  behaving like puppets of neo liberal economy.”

Hannan Mollah also announced solidarity programme on September 5, towards struggles of working class people of the country, and towards the struggles being waged by youth in the state demanding  jobs and employment opportunities.The rally, was presided over by veteran AIKS leader Nripen Choudhury.

Bimal Mondal of Bankuras’  Shaltora area,   rued that be it the state government announced scheme of krishak bandhu  or any other schemes, all are in paper only, and to avail these schemes, a hefty 30 per cent cut money has to be given to the TMC hooligans.

In the rally, rich tribute was paid in the memory of the 80 martyrs of the food movement of 1959, who had bled to death in Kolkata streets by the batons of the police force of the then Congress led state  government. The people had come to the capital city of the state to demand  food supply to  the hungry millions in the state.

Out of the 217  farmers who committed suicide, a fact which is denied by the state government, family members of 43  farmers joined the rally and shared their ordeal on the stage; huge debt to private institutions like LMP and Bandhan bank and private moneylenders, which has led to suicide by their family members.

Brother of  farmer-Sanatan Dhara,  a resident of Burdwan’s Bhatars Nabasta area , told  the audience with a cracking voice regarding the ordeal they had to pass through.  Pratima Karar’s plight, widow of another potato grower, Sanjoy Karar, of Hooghly, who committed suicide, two years ago, moved everybody to tears when she herself spoke and burst into tears while detailing her ordeal. Indeed many of the  43 families present alleged that the  TMC’s reign unlike that of previous Left governments’ time has ushered in a nightmare for them, and in each of their village’s  many more will suffer the same plight if  the state government do not intervene, in the manner in which they used to do during the Left Front governments’ time.

One of the main slogans of the rally was, “No Suicide, Lets Fight”. Amiya Patra, veteran leader  and state AIAWU  secretary, said  that when “one country one law” is being said by the present regime, then why are set of laws different for the peasants, while the business barons like Ambani and Adani  are getting  lakhs of crore loan waivers  in the country, the poor peasants are victimised.  He also highlighted that Mamata Banerjee is giving impetus of Rs 25,000 per puja as aid to 28,000 Durga Puja committees in the state, while the same Rs 70 crore would have ensured four eggs per day to all the school going children in the state, as children from poor families depends on mid-day meal for nourishment in many cases, and state’s mid-day meal is now in dire straits for want of funds.

Amal Haldar, secretary of AIKS West Bengal committee   questioned as to whether death like a fighter before police fire, or in struggle against the oppressors is more worthy, than that of meekly surrendering by suicide? Speaking in the Rally Tushar Ghosh, president of  West Bengal unit of AIAWU  said that  peasants and agricultural workers should prepare for waging more intense struggles, so that these apathetic  governments, bow down to the collective pressure of farmers of the state.