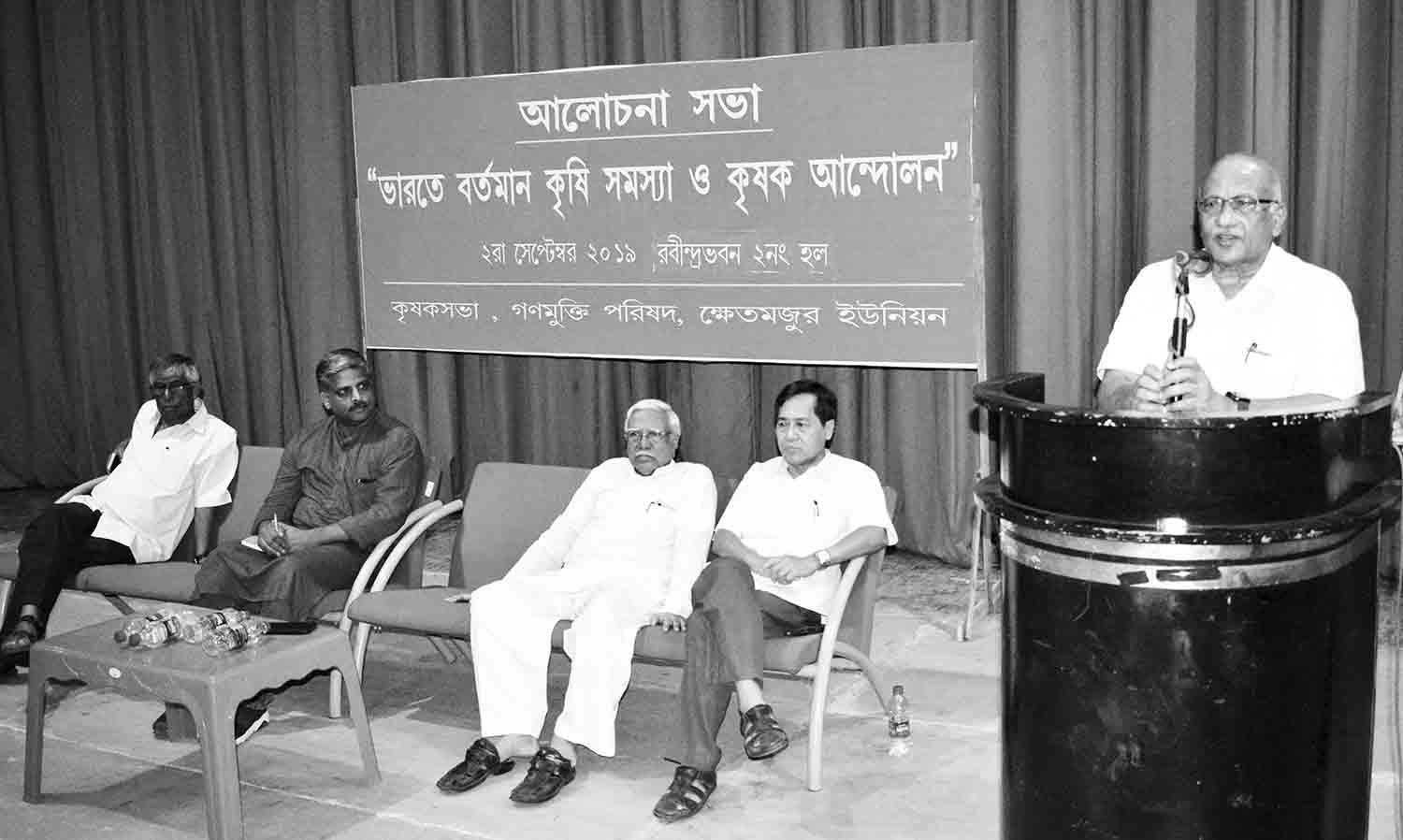 THE two-day extended meeting of All India Kisan Sabha, Tripura state council and Tripura Gana Mukti Parishad held at Agartala on September 1-2, 2019 gave a clarion call to strengthen resistance and intensify struggles on the burning problems of the peasantry and the oppressed sections. Broad solidarity will be built uniting the peasantry, agricultural workers, workers, women, youth and all oppressed to make timely interventions as well as result-oriented struggles. The meeting was presided over by Narayan Rupini, veteran leader of the Gana Mukti Parishad and president of the Tripura State Kisan Sabha. The meeting expressed condolences on the death of different leaders and paid tributes to martyrs who were killed by the RSS-BJP, TMC and ruling class goons in different parts of India.

AIKS general secretary Hannan Mollah inaugurated the two-day extended council meeting. In his inaugural address, he explained the agrarian situation in the country and the pro-corporate, anti-peasant nature of the Narendra Modi led BJP government. He termed it the most anti-peasant government since independence. He also highlighted the struggles of the Kisan Sabha in the last five years and pointed out that they had effectively created an atmosphere against the BJP government. He stressed on strengthening the organisation and taking up result oriented struggles.

Tripura Kisan Sabha secretary Narayan Kar placed a detailed report on the situation in Tripura explaining the nature of attacks unleashed after the assembly elections in 2018 on the cadre of Kisan Sabha, Gana Mukti Parishad and Left and democratic forces as well as the stifling of democracy in the state. The report prepared on the basis of a questionnaire and information from different districts in the state laid bare the nature of fascistic attacks unleashed by the RSS-BJP in the state. It also explained the situation of peasantry, adivasis and the oppressed who are facing the worst crisis. Fields are being left fallow because of the failure of the BJP government to provide quality seeds and fertilisers. The lift irrigation system which was a lifeline of cultivators has collapsed as workers operating them have been targeted for being part of the CITU. The Pradhan Mantri Fasal Bima Yojana has totally failed and not a single rupee has been given to farmers although crores have been collected as the premium. He also explained that the cadre were coming out, resisting attacks and exposing the failure of the BJP government at the centre and in the state. This will be scaled up and struggles will be intensified. On September 5, at the call of AIKS, peasants and agricultural workers and all oppressed sections would rally in solidarity with the workers against the anti-worker policies of the BJP government at the centre and the ESMA being passed in the state. Jitendra Choudhary, convenor of Adivasi Adhikar Rashtriya Manch and joint secretary of AIKS was also present. The chief executive member of the Tripura Tribal Area Autonomous District Council Radhacharan Debbarma said that in addition to the policy-driven agrarian distress, the TTAADC is being starved of funds; there is no creation of employment opportunities under MGNREGA and minor forest produce is not procured leading to a situation of hunger and malnutrition in tribal areas.

Around 150 delegates attended the meeting and 24 delegates representing different sub-divisions spoke about their experiences after the last assembly elections and made suggestions to strengthen the organisation. They detailed how the RSS-BJP were not merely unleashing barbaric attacks on the cadre and leadership but also destroying their livelihoods by poisoning fish ponds, destroying fields, rubber trees and tillers, denying fertilisers, subsidies and even the meagre support provided under the farcical Pradhan Mantri Kisan Samman Nidhi. Collapse of irrigation has led to large tracts of farm lands being left uncultivated and absence of procurement by the government has forced those who have managed to cultivate paddy to make distress sales. Shop-keepers are also being threatened against selling to activists of the Left movement, forcing them to make purchases at night or before dawn. Offices of Kisan Sabha and Left and democratic forces have been forcibly occupied and many have also been destroyed using bulldozers. However, the delegates explained that they are building resistance and people are increasingly coming out questioning the anti-peasant nature of the BJP government expressing confidence that they would intensify struggles and defeat the conspiracies of the BJP-RSS.

vice president S Ramachandran Pillai explained the need for the Kisan Sabha emerging as an independent organisation of the peasantry that will be the true representative of the landless, the poor, marginal and middle peasants while also trying to rally sections of the rich peasantry. He expressed confidence that an organisation with a glorious history of struggles will surely overcome the present situation in the state. AIKS joint secretary Vijoo Krishnan pointed out that the RSS-BJP were forgetting that the Kisan Sabha and the Gana Mukti Parishad have a tradition of struggles against imperialism and feudalism and have sacrificed a lot to defend democratic rights. He said that within 18 months of coming to power, the BJP has rendered the state in disarray. Starvation and hunger is rampant, employment under MGNREGA is dismally low and in a state that set an example through the implementation of the SRI method of paddy cultivation, farmers are being forced to leave fields fallow due to absence of fertilisers and irrigation. He particularly spoke about the case of a family being forced to sell their just-born child for just Rs 2,000 in Mohanpur sub-division of Tripura west district due to starvation and lack of employment opportunities. He called upon people to raise questions to the chief minister and the BJP-RSS contrasting the situation with the impeccable record of the Left Front government.

After the conclusion of the extended council meeting, a seminar was held jointly by AIKS, AIAWU and Gana Mukti Parishad at Rabindra Bhavan on September 2, 2019 on the topic ‘India’s agrarian crisis and peasant resistance’ in which Hannan Mollah, S Ramachandran Pillai and Vijoo Krishnan spoke. The meeting concluded with a strong resolve to intensify struggles and with confidence that the people of Tripura shall overcome and emerge victorious against the RSS-BJP.