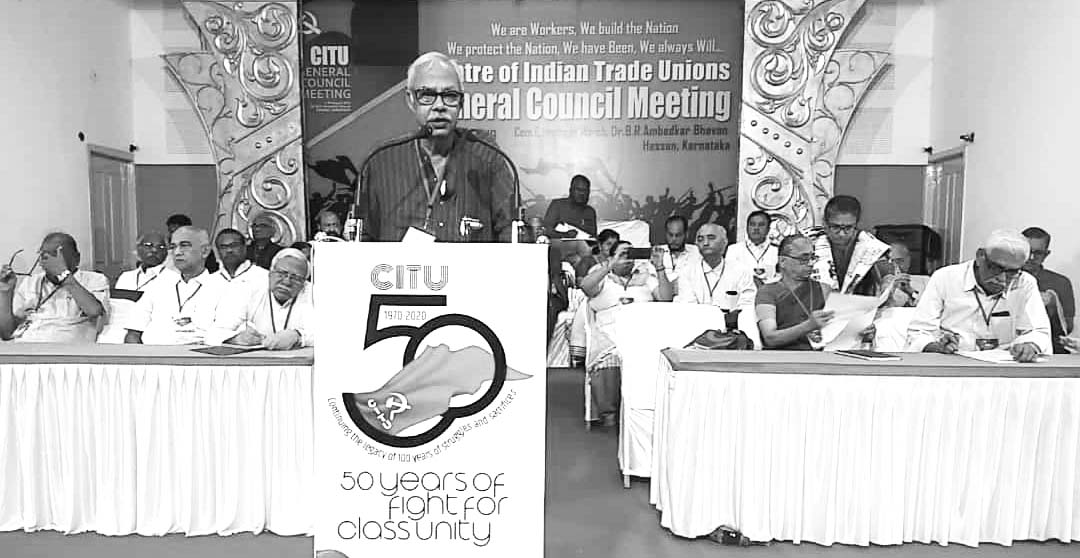 THIS was the slogan of the CITU general council that was held in Hassan in Karnataka on August 7-10, 2019. The general council called upon all its affiliated unions and committees to display this slogan prominently during the night long ‘jagaran’ that will be held on the night of August 14, on the eve of the Independence Day.

On that occasion, tens of thousands of workers will be taking the pledge ‘The India I dream of’ to continue the fight to achieve that India, which their forefathers dreamt of while fighting for independence from British imperialism.

The general council of CITU asserted that the need of the hour was to challenge the anti-worker, anti-people and anti-national Modi 2 government on all fronts and force reversal of its regressive policies. The situation called for heightening joint and independent struggles against the neoliberal regime, against the communal divisive agenda and against the repressive, authoritarian and anti-democratic practices of the BJP government at the centre.

The incessant rains that lashed Hassan during the entire duration of the general council, without any respite, could not dampen the struggling spirit of the members. Nor could the bad weather diminish enthusiasm of the volunteers, who worked hard to make all the necessary arrangements for the smooth conduct of the meeting.

The general council of CITU decided to extend solidarity and participate in full strength in the demonstrations called by the All India Kisan Sabha on September 5, 2019. It has called upon all CITU committees to take the initiative to organise joint worker-peasant demonstrations in as many centres/locations as possible

The CITU general council welcomed the decision of the defence employees to go on 30 days’ strike from August 20, 2019 against the decision of the Modi 2 government to corporatise the defence production units. It extended solidarity with the defence employees and called upon all its units, particularly where the ordnance factories are located, to mobilise workers from all sectors in large numbers in support of the struggles against the measure to dismantle the public sector and destroy our indigenous manufacturing capacity in favour of foreign corporates.

It also decided to stand with the workers of steel, railways, BSNL and other public sector undertakings fighting against handing over these units to private corporates, domestic and foreign, in the name of disinvestment, privatisation, strategic sale etc. The general council decided to organise conventions involving all the trade unions including those of the railway employees against the 100 days plan of the government in the railways including the corporatisation of the production units and introduction of private trains in major routes. It has decided to conduct a wide campaign among the people explaining the impact of the plan on the common people who use the railways as a means of cheap transport in their daily lives. Demonstrations will also be held in front of the railway stations.

The Modi led BJP government is going ahead with its so called ‘reforms’ process, amending labour laws, privatisation and land acquisition to make the foreign investors ‘happy’ and further facilitate ‘Ease of Doing Business’. In view of this, CITU general council decided to conduct a wide campaign to prepare the working class in the country for heightened joint struggles including strike at the appropriate time, to be decided by the joint trade union movement. It has reiterated that the call to ‘Reach the Unreached’ and ‘Link up issues with policies and expose the politics that determine the policies’.

The CITU general council endorsed the decisions of the meeting of the All India Coordination Committee of Working Women (AICCWW – CITU), which was held one day prior to the meeting of the general council, on August 6 in Bengaluru. It decided to hold a national convention on the Prevention of Sexual Harassment at Workplace (POSH) Act along with the AIDWA and the AILU and conduct a national seminar on various aspects of women’s labour. The general council also endorsed the proposal of AICCWW, of a two months’ campaign on the specific issues of women workers culminating in massive ‘jail bharo’ programmes all over the country on March 8, 2020, the details of which would be finalised in the 16th conference of CITU. On the occasion of the golden jubilee of CITU, the general council called upon all the state committees to double their women membership, as part of the decision to reach one crore membership by the end of the year.

The Hassan general council of CITU was attended by 355 members including office bearers, from 22 states. 44 of them were women. The meeting started with the hoisting of the CITU flag by Hemalata, president of CITU, who also presided over the inaugural session.

Vijaya Kumar, honorary president of the reception committee welcomed the participants. Three important resolutions – against the BJP government’s authoritarian onslaught on constitutional order, federalism and democracy in Jammu and Kashmir; against attacks on dalits, adivasis and minorities and on violence against women and children were unanimously adopted in the inaugural session. The resolutions were placed by Tapan Sen, general secretary, AK Padmanabhan, vice president and AR Sindhu, secretary of CITU, respectively. In addition, a resolution on the devastating floods in Karnataka, Kerala, Maharashtra and parts of Gujarat, calling upon the working class to provide all possible help and assistance to the flood affected people, was placed by G Sukumaran and supported by S Varalakshmi, both vice presidents of CITU was also adopted by the general council unanimously

In her presidential address, Hemalata asserted that this was not the time for routine meetings and ritualistic speeches. The Modi government was stubbornly pursuing the neoliberal policies that have been widely acknowledged as unsustainable and are discredited globally. Working class across the world was struggling and searching for alternatives. The so-called ‘establishment parties’ are losing their credence. Left forces are gaining where they have stood unflinchingly with the working class. Where they have wavered, the rightwing forces are gaining ground. In India, the joint trade union call to defeat the ‘anti-worker, anti-people, anti-national’ BJP in the elections did not get the support of the workers, who have just a couple of months ago joined the unprecedented two days’ strike. This necessitates introspection on how far we have been able to ‘reach the unreached’ and tried to expose the BJP’s politics in the elections. It is also necessary to self critically examine our methods of work to see whether we have internalised the directions of the Kozhikode document on organisation, unanimously adopted in the last general council meeting.

The general secretary of CITU, Tapan Sen, dealt elaborately with the situation in the country and the struggles of the working class. He said that the budget placed by the finance minister, the unscrupulous method of fixation of the minimum wages, the passage of the Code on Wages Bill, the Motor Vehicles Bill, the amendments to the UAPA and the Right to Information Acts etc – all demonstrate the arrogance and aggression of the Modi 2 government, which returned to power with increased mandate. He asserted that further authoritarian and fascistic onslaughts were on the anvil. The only way before the working class was to intensify independent and joint struggles involving the entire working class as well as all other toiling sections of the people. He emphasised that the Golden Jubilee observation of CITU and the centenary of the first central trade union of the country, AITUC, should be utilised to heighten the struggles to defeat this fascistic regime which posed a big danger to the unity of the people and integrity of our country. CITU has to be developed as a countrywide strong and militant workers’ organisation to meet the challenges ahead. Special efforts have to be made to convert the CITU’s expanding influence into organisational strength, by increasing its membership.

The general council expressed its strong indignation when it came to know about the detention of the Left leaders, Sitaram Yechury, general secretary of CPI(M) and D Raja, general secretary of CPI at Srinagar airport on August 9. They were not allowed to visit Yusuf Tarigami, a CPI(M) MLA in the dissolved J&K state and is also the president of the state committee of CITU. Tarigami was kept under house arrest and was not keeping well. Despite the pouring rain, the general council members held a militant demonstration on the street and vented their anger at the attacks on the democratic rights of the people.

75 general council members participated in the discussion on the general secretary’s report. Many of them gave valuable suggestions. In addition, five invitees also spoke in the meeting. Hannan Mollah, AIKS general secretary, greeted the general council and informed the decision of AIKS to organise demonstrations all over the country to commemorate the September 5th Mazdoor Kisan Sangharsh Rally of last year. He called for further strengthening of joint actions and solidarity between the working class and the peasantry. His message received tremendous appreciation from the general council members.

For the first time, simultaneous translation in six languages - Bengali, Hindi, Kannada, Malayalam, Tamil and Telugu was tried experimentally in the general council meeting. Despite some initial hiccups, it was more or less successful and the members appreciated the effort and requested to continue it in the ensuing CITU conference in Chennai.

The proposals related to the 16th conference of CITU to be held in Chennai on January 23-27, 2020, placed by Tapan Sen were also unanimously accepted. The venue will be named ‘Md Amin Nagar’ after Md Amin, veteran trade union leader and former general secretary of CITU; the dais will be named ‘Sukomal Sen Manch’, veteran historian of the trade union movement, leader of the state government employees and also former vice president of CITU. The venue of the public meeting will be named after Singaravelu, who celebrated the first May Day in India, in Chennai on May1, 1923.

In her concluding address, Hemalata thanked the reception committee, the translators, the cultural team and all the volunteers for the excellent arrangements and the hard work. She urged upon all the general council members to keep in mind the spirit of the tasks taken up in the meeting in the context of the ultimate constitutional objective of CITU. All efforts must be made for their effective implementation, she stressed.

The India I Dream Of

India where work, physical or mental, is equally recognised, respected and acknowledged

India, where right to work, livelihood and life are guaranteed as fundamental rights

India, whose economic self reliance and political sovereignty are not compromised or surrendered

All women and men are treated equally and with dignity

Where people lead a life of peace and satisfaction without  worry about work, food, housing,  health and education

Where people are bound with love, friendship and live in harmony and mutual respect

The India dreamt by our forefathers, the millions of workers who fought for Independence from British imperialism