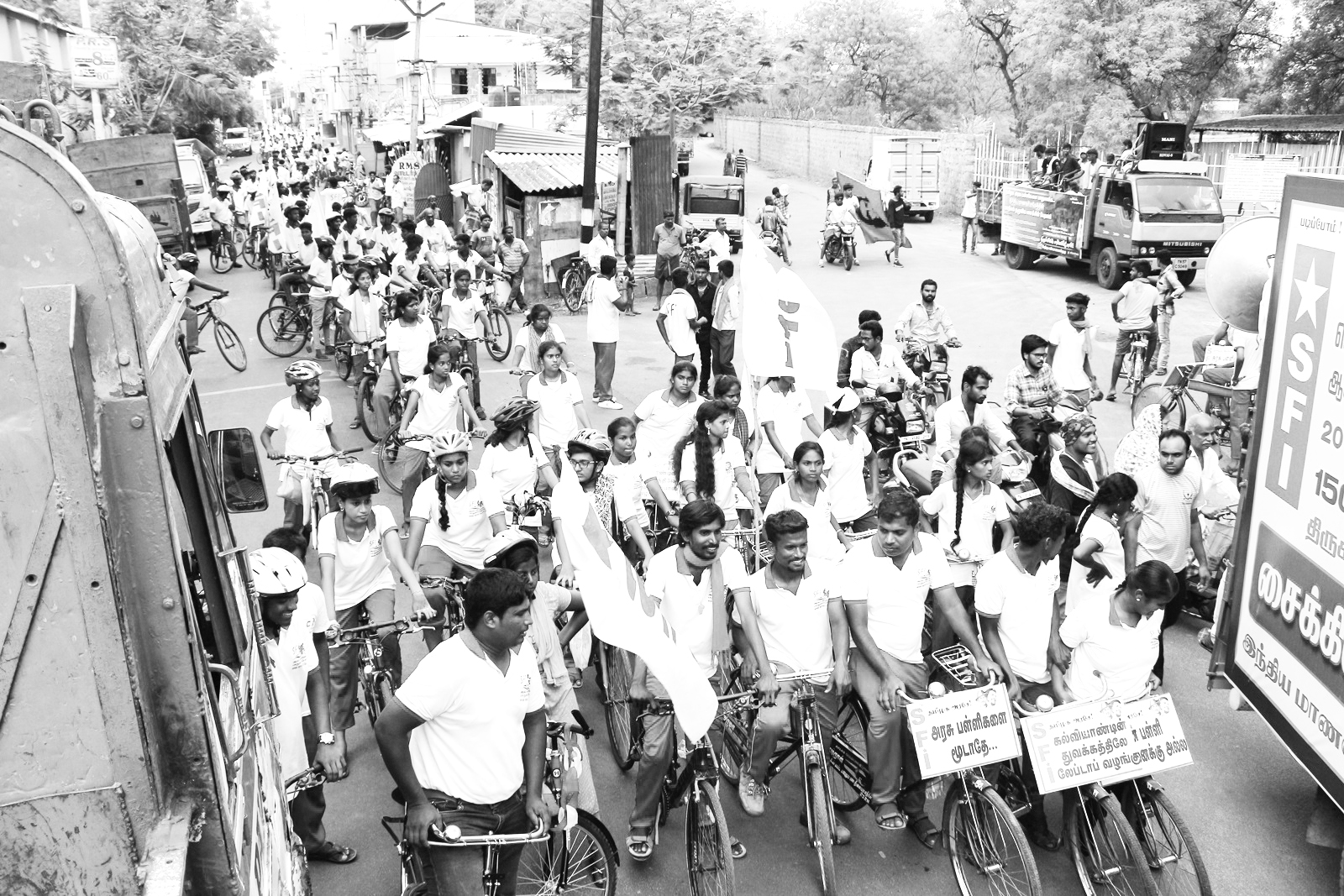 In Chennai, the rally was flagged off by T K Rangarajan, MP, in the presence of educationist V Vasanthi Devi and director Pa. Ranjith, from Tambaram. In his inaugural speech, T K Rangarajan strongly criticised the state government for the pathetic situation of government schools in the state. Dr Mylswamy Annadurai, retired scientist of ISRO and program director of Chandrayan and Mangalyan missions, flagged off the rally in Coimbatore along with SFI all India president V P Sanu. While addressing the rally, Dr Mylswamy Annadurai said that he and most of the scientists who worked with him studied in government schools and they were successful in sending satellites even to Mars. He also raised the need for protecting government schools. Writer Imayam flagged off the cycle rally from the coastal town of Cuddalore. In Kanyakumari, former SFI all India president and CPI(M) Polit Bureau member M A Baby flagged off the rally. Baby pointed out that the Left Democratic Front government in Kerala has set a model by strengthening public education through its general education protection campaign and as a result, lakhs of students are now leaving private schools to join government schools every year.

SFI activists pedalled and took the rally across the state, despite the hot climate, and met students and parents on its way. The rally was well received by students, youth, workers, and farmers across the state. While the rally was covering the Kancheepuram district through Chennai – Thiruchirapalli highway, workers of BMW plant came out with drinks and snacks for the activists. It was farmers and students who came to receive the rally when it moved across the rural parts of the state. Farmers and parents came up with drinks and fruits for the activists to sustain the hot climate while cycling. Small meetings and protest gatherings were held at all reception points, and awareness on the present scenario in the state regarding public education and the government’s move to close down government schools were brought out by distributing pamphlets and through discussions with the public.

With the demands of the rally, SFI also expressed its concern over the mushrooming growth of private schools in the state in the past few decades, among which many are even unrecognised. SFI also demanded the state government to take action against the private schools charging exorbitant fees. The findings of Justice T V Masilamani committee, which was appointed for monitoring the private school fee, has not been taken into action by the state government. For the economically backward students, the Right to Education (RTE) Act mandated 25 per cent of seats to be reserved without any fees. However, in private schools, fake documents are forged for showing that the Act is implemented which actually remains only on papers. In this regard, throughout the rally, SFI demanded the state government to implement RTE Act in all schools without any discrimination. Throughout the seven days, all activists tirelessly cycled towards Tiruchirappalli raising the various demands put forward. The four-cycle rallies met at Tiruchirappalli on May 31, and the rally was concluded with a public meeting which was addressed by Su. Venkatesan, MP from Madurai and Sahitya Akademi award winner. Students from across the state participated in the public meeting and expressed their solidarity with SFI for its fight to safeguard public education and government schools.