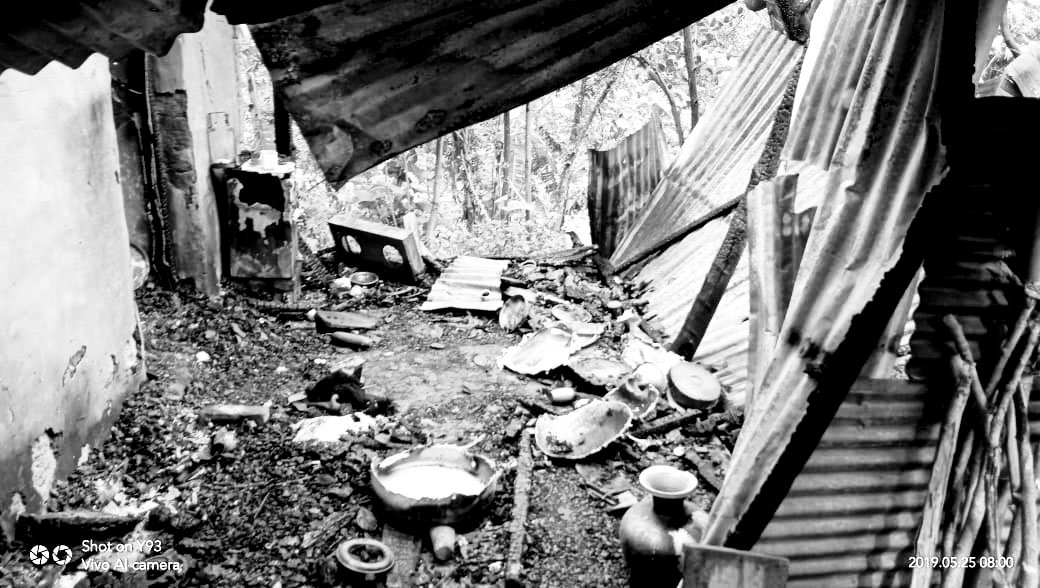 Who Bears the Brunt of BJP’s Victory in Tripura?

ARE you a leader, or a worker or an ordinary supporter of CPI(M) or any other Left party? Then, ‘they’ are free to enjoy beating you mercilessly, even taking your life with least hesitation. They have the right to celebrate their victory by setting fire to your house, or wrecking everything inside your house, or looting the valuables of their choice from your house. They enjoy right to ransack or loot your shop, destroy your crop, cut down the plants of your rubber garden, poison your fisheries, badly damage or burn down your vehicles. They can impose huge amounts of ransom that you are bound to oblige if you want to get their mercy to live in your own house, or to send your kids to school. This is the true picture of the state since HIRA(acronym given to the CM of Tripura by Modi during the assembly elections) regime took over in Tripura from March 3, 2018.

Who are ‘they’? They are a section of bike-ridden, salaried BJP workers. Certain groups of them are assigned to dominate in certain areas to oversee the movements of CPI(M) leaders or supporters. They monitor the opposition party’s programmes and also participation in such events. In a word, they are assigned to oppress and suppress the opposition activities in the area in whatever manner they wish. They strangulate any voice of dissent whether it is individual or in print or electronic media. They are above the law which bows down at their feet. They think themselves supreme and they are the true rulers of the area.

This account may seem to be dramatic and unbelievable for the people living in other states. Reasonably, they may ask, whether the police, the law enforcing agencies do not act upon. Certainly, they do not. Most of them are active to harass the Left or opposition supporters on the basis of the fake complaints lodged by the bike-ridden goons of the ruling BJP. Lodging complaints to the police against any known BJP hoodlum is nothing but inviting further attack and unbearable harassment from the bike-ridden forces with greater magnitude.  Though a small section of the police sincerely try to enforce law against the perpetrators, their hands are tied. This lawlessness is the law of the land in Tripura since 3rd March; the declaration of assembly election results last year and the Indian Constitution, the fundamental right to life, security of property etc., just do not apply for the opposition supporters and citizens in Tripura.

Since March 3, 2018, not a single day passed without any violent attack upon the CPI(M) leaders, members and supporters by a section of miscreants, allegedly  the bike-ridden terror brigade of the state. Even the leader of opposition, Manik Sarkar-former chief minister, was prevented to move to his scheduled places. Former members of parliament, members of state assembly and other elected members of different constitutional bodies belonging to CPI(M) were physically assaulted, their movements prevented. Seven CPI(M) leaders, members and supporters were murdered in gruesome manner in last 14 months. Seven hundred CPI(M) leaders, members, and supporters including women were physically tortured. Many of them had to be hospitalised and treated inside and outside the state. In several places, the attackers even prevented the injured persons to go to the hospital for treatment, which is unimaginable in a civil society. Many attacked and injured persons got totally immobilised due to grievous injuries and a few of them succumbed.

Hundreds of offices of the CPI(M) and other opposition parties and the offices of the different democratic  mass organisations were either set on fire or vandalised and looted. Their rubber gardens were cut down, fisheries poisoned, shops set to fire, looted, vandalised, crops and vegetable fields damaged, cars and bikes were damaged or set to fire.

In the name of bye-election to the three-tier panchayats and urban local bodies, more than 50 per cent of seats in those bodies were caused to be vacated by means of threat and intimidation. The CPI(M) sponsored elected office bearers of  these bodies were not allowed to carry on their duties and even prevented to attend offices. In about 96 per cent election bound seats, no opposition party candidates were allowed to submit nomination and in remaining four per cent seats rigging was done.

In this background, despite all these attacks that completely vitiated atmosphere and restive condition,   CPI(M) participated in the Lok Sabha elections. But the situation continued to remain the same. No free, fair and peaceful campaign by the CPI(M) and other opposition parties was allowed. Even the CPI(M) candidates, Jitendra Chowdhury and Sankar Prasad Datta of Tripura East (ST) and Tripura West Lok Sabha constituencies respectively, were attacked several times in presence of the security forces; their vehicles were badly damaged on several occasions.

The first phase of elections(April 11) in Tripura West parliamentary constituency, intimidation of the opposition voters, and other forms of the electoral mal-practices by the BJP were at its zenith. Even a section of the ruling party supporters could not cast their votes due to the aggressive attitude of indignant BJP workers. In view of the experiences of rampant rigging and electoral malpractices in Tripura West constituency, the Election Commission of India(ECI) had to defer the date of polling in Tripura East (ST) Lok Sabha constituency from April 18 to April 23. This was done to ensure that adequate security deployment could be done. After an extensive exercise of scrutiny of internal documentation for about a month, the ECI declared re-poll in 168 polling booths of Tripura West constituency against the opposition demand for re-poll in the entire constituency. The ECI’s order for re-poll in one parliamentary constituency is, though, a rare case in the Indian electoral history, is nothing but a face-saving move of the ECI to hide gross mal-practices of the ruling BJP.

As anticipated, proving hoax all the assurances on behalf of the ECI that there will be adequate security at the counting site and violence will not be allowed, the CPI(M) leaders, workers and supporters were attacked in the counting halls itself. Sixty counting agents of CPI(M) candidates were attacked and injured. Fifty five of them are of Tripura West constituency.  In the counting halls, ruling party workers created such a fearful violent atmosphere that forced all the counting agents of CPI(M) candidates of Tripura West constituency to withdraw by 1 p m on May 23.

Since May 23 and up to May 27 evening, 18 CPI(M) offices were set on fire including Gandachhara sub-divisional committee office, 19 CPI(M) offices were vandalised including Panisagar sub divisional committee office. One  CPI office was ransacked, four CPI(M) offices were looted, CPI(M) district committee office at Ambassa was locked, two democratic mass organisation offices were vandalised, 59 CPI(M) members and supporters (including counting agents) were physically assaulted. Twenty two houses and 10 shops of CPI(M) members and supporters were set on fire, 266 houses and 20 shops of CPI(M) leaders, members and supporters were attacked and vandalised. Sixteen cars and bikes were set on fire or completely broken down. Many fisheries and rubber gardens were damaged, even milching and pregnant cows were poisoned to death at Champaknagar. There are many other such violent attacks, but all such information cannot be collected as the victimised persons are forced to run away from the area.

The habitations of religious minorities were attacked and they are under constant threat in Belonia, Santirbazar, Udaipur, Sonamura, Bishalgarh, Sadar and Jirania sub divisions.

In some areas, some provocateurs are trying to foment ethic tension.

In the name of celebration of victory of the BJP candidates, rampant extortion of money is going on. Huge sum of money ranging from Rs 10,000 to 5 lakhs is being demanded from the CPI(M) and other Left party leaders, members and supporters. Unfortunately, one member of the CPI, namely Rabi Paul committed suicide in Muhuripur village of Santirbazar due to the coercive demand raised by BJP for payment of huge amount of money.

Daily ‘Desher Katha’, an ‘A’ category and a popular newspaper of the state has been prevented to be distributed and circulated among its readers, subscribers all over the state. This is a glaring example of brazen attack on freedom of press.

In view of these extremely unbearable, barbarous, autocratic circumstances, a delegation of CPI(M) legislature party comprising of Manik Sarkar, leader of the opposition, Badal Chowdhury, deputy leader of the opposition, Tapan Chakraborty, Bhanulal Saha, Prabhat Chowdhury and Sahid Chowdhury, all MLAs met the chief minister of the state and submitted a memorandum containing details of such unprecedented incidents of violence. The delegation in their memorandum pressed for following demands:

While interacting with the delegation, chief minister did not dispute of the facts mentioned in the memorandum and informed the delegation that he had already asked the director general of police(DGP) of the state to take firm steps against the perpetrators. He assured the delegation to restore peace at any cost. But, given the fate of his earlier assurances on several occasions in the last 14 months rule of BJP-IPFT alliance, all proved to be deception; the people of the state see no reasons to believe his empty promises afresh.

However, the democratic-minded, peace-loving lacerated people of the state shall continue to fight back the anti-democratic, unruly and barbaric force raised by the BJP with the fraternal assistance and solidarity of the secular-minded democratic people of rest of the country.