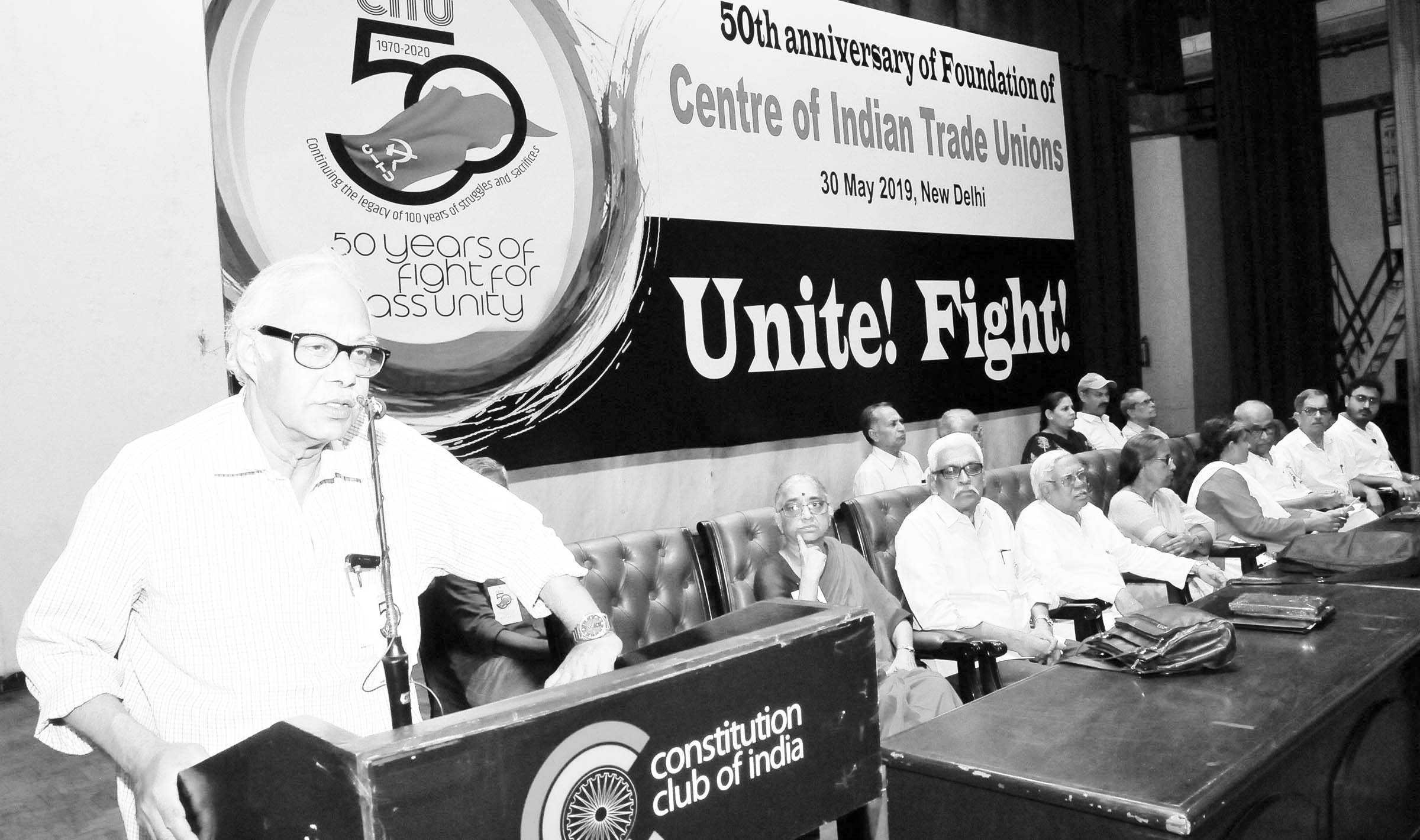 THE yearlong observance of the Golden Jubilee of CITU, which was founded on May 30, 1970, started with great enthusiasm in a massive meeting at Mavalankar Hall in New Delhi, on May 30, 2019. In addition to the Golden Jubilee of CITU’s foundation, CITU is also observing 100 years of the formation of the first central trade union in the country with the slogan ‘Carrying Forward 100 Years of Struggles and Sacrifices and 50 Years’ Fight for Class Unity’.

The events of the Day started with the hoisting of CITU flag at B T Ranadive Bhawan, the central headquarters of CITU, by Hemalata, president of CITU. Tapan Sen, general secretry and M L Malkotia, treasurer of CITU, A K Padmanabhan, S Dev Roye, J S Majumdar and A R Sindhu, office bearers of CITU were present.

The meeting at Mavalankar Hall was presided by Hemalata. Leaders of several fraternal organisations of bank, insurance, BSNL, state and central government employees, All India Kisan Sabha, All India Agricultural Workers’ Union, All India Democratic Women’s Association, Democratic Youth Federation of India, Students’ Federation of India, Dalit Shoshan Mukti Manch etc in addition to CITU leaders, cadres and activists from all over the country participated in the meeting.

Tapan Sen briefly recalled the circumstances when CITU was founded. He said the leaders who founded CITU played a crucial role in the trade union movement of the country, in the independence struggle, by not only organising the workers on their own demands but mobilising them in the struggle against British colonialism. These leaders had a clear vision of emancipation of the country, not only from British imperialism but also from all exploitation and the leadership role of the working class in such a struggle.

When the leadership of the major central trade unions took class collaborationist stand and refused to take initiatives to unite the entire working class in joint struggles, it was felt necessary to form another central trade union to discharge these urgent tasks. Thus was born CITU. It was a historic necessity to keep the working class movement on the track of class struggle which was sought to be dechannelised by the-then ruling polity in the background of economic crisis.    Many major joint struggles – countrywide general strikes and series of sectoral  agitations and strikes including the historic railway strike in 1974 took place after this, the latest being the two days’ strike this year.

The return to power of the BJP government led by Modi, which in its earlier term aggressively pursued neoliberal policies and attacked the hard won rights of the working class, is a big challenge to the working class. It indicates the urgency to make the working class aware of their worsening conditions and the policies of the government threatening the very foundation of the entire national economy and setting in a process of deindustrialisation. Strengthening the unity of the working class, intensifying joint struggles against the policies along with independent campaigns and struggles highlighting alternative policies should be taken up as a priority task during this year, Tapan Sen said. He also said that organisational expansion and consolidation of CITU, developing political ideological consciousness of its cadres, particularly young and women cadres, developing joint actions with all sections of toiling people, particularly the peasants and agricultural workers, solidarity actions in support of the demands of other sections, addressing the issues of social oppression etc should be seriously taken up during this period. The focus should be on developing CITU as a militant all India organisation of the working class of India. All state committees of CITU and its affiliated federations should chalk out concrete programmes in accordance with the decision of the CITU secretariat which will concretise these tasks.

The meeting was also addressed by AK Padmanabhan, former president of CITU, who participated in the foundation conference of CITU as a delegate from Tamil Nadu. Hannan Mollah, general secretary of AIKS spoke extending solidarity and emphasised, in particular, the urgency of strengthening sustained initiatives for worker-peasant joint actions.

The meeting concluded with thunderous slogans reflecting the determination of the participants to carry forward CITU’s legacy of struggles, sacrifices and strengthen joint and independent struggles aimed at defeating neoliberalism and march ahead to achieve CITU’s constitutional objective of ending all exploitation.