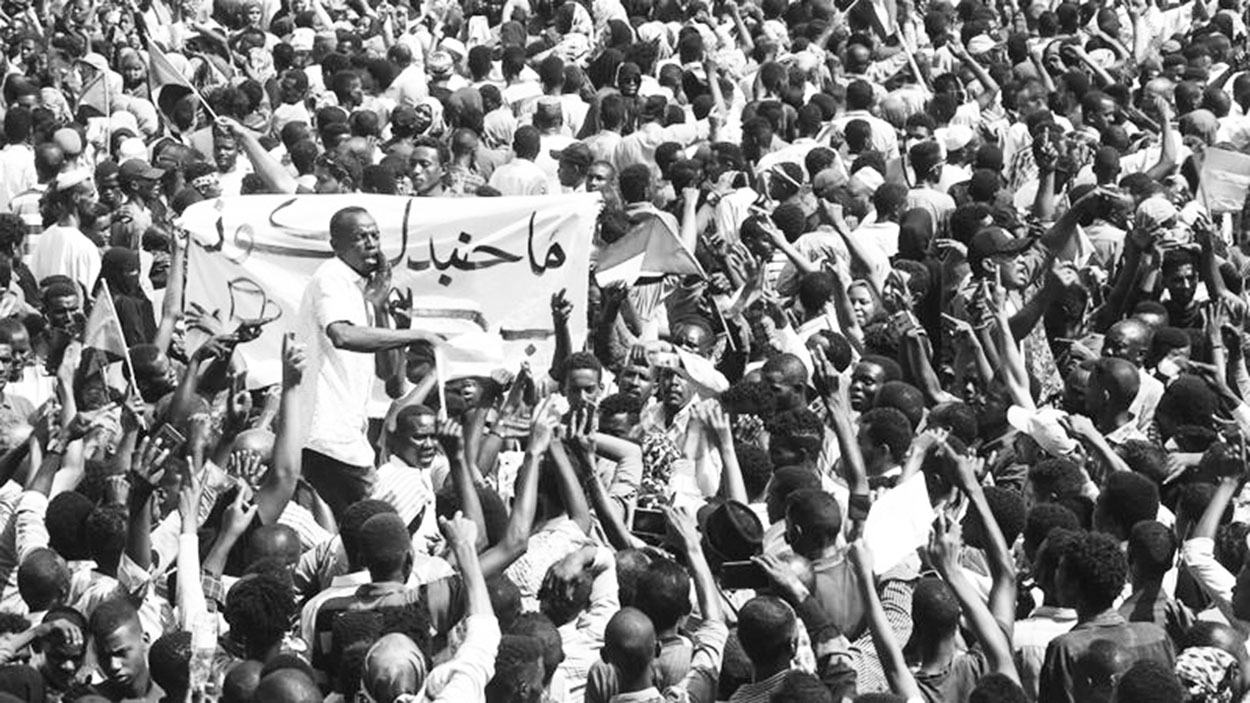 IT is now exactly five months since the mass protests in Sudan (started on December 19, 2018) had started that led to the deposition of the dictator Omar Al-Bashir. For all these five months, the people of Sudan have continued with their protests with lot of determination. They did not rest after Al-Bashir had stepped down as the ruler of the country and the military took over. They demanded the immediate transfer of power to a civilian administration representing all sections of the Sudanese society. The military council, which had assumed the control of the government after Al-Bashir, had agreed to a timetable for the transfer of power on May 14, 2019, in their discussions with the representatives of the protesting people, but backtracked on this promise the very next day, by imposing conditions.

Popular anger against Al-Bashir’s regime rose because it had pursued policies that increased exploitation and also curtailed the democratic rights of the people. Demonstrations were sparked by the decision to cut the subsidies given on bread and fuel, thus leading to a substantial rise in their prices. The regime was implementing an economic policy dictated by the World Bank and IMF which has ruined the country and turned the lives of the overwhelming majority of the population into one of misery, hunger and poverty. The impact of the global economic crisis had accentuated their miseries. The government sold the country’s fertile lands to foreign capital, evicted its local owners, opened up the country to the CIA and Mosad’s activities, hosted the CIA’s largest station in Africa, joined the US AFRICOM and sent troops to Yemen as part of Saudi Arabia’s invasion. Popular protests were brutally suppressed with the country’s military too playing its part in this oppressive regime.

The protests in the capital city Khartoum found a reflection in many cities cutting across all the regions in the country. The peaceful protest organised in Omdurman after a major football game caught the attention of the people not only in Sudan, but also of people around the world. The government, as usual, resorted to large scale repression to frighten the people and ensure that they do not participate in any further protests. In the first three days of protest itself, more than 40 people were killed in the firing by the armed security forces, who acted under the orders, ‘shoot to kill’. Instead of frightening the people, the police repression had the opposite effect – it had further galvanised people to participate in protests. Henceforth, the protests spread throughout the country. People began to demonstrate daily braving the repression, detention and torture.

ACTIVE ROLE OF THE SCP

The Sudanese Communist Party (SCP) played an active role in these protests. It had taken the initiative to bring together all the opposition parties on a joint platform. The opposition alliance, National Forces for Consensus and Change (Forces), met at the headquarters of the Sudanese Communist Party and decided to further broaden the front by inviting democratic trade unions, youth, women organisations and all other political parties and patriotic citizens to join the struggle against the dictatorial regime. This call received good response with many trade unions, youth and women organisations too joining the protests, further brining in large number of people on to the streets.

The government irked by the role of the SCP, made it a special target of its attacks on the protesting parties and organisations. On the very third day of the protests, in an unprecedented action, the armed police raided the headquarters of the SCP and abducted Hanadi Fadl, Political Bureau member of the SCP and Masoud Ali, another member of the Political Bureau and secretary of the Party in the capital. They were detained for many days in an undisclosed location and no information about their whereabouts were shared with either their family members or the Party. Undeterred by such acts, protests further intensified.

For days together, protests continued and Khartoum became the centre of the struggle as it is the seat of political power. People were prevented from marching to the Presidential Palace and handover a memorandum to President Al-Bashir. All the streets and by-lanes of the capital city turned into battlegrounds with people valiantly resisting the attack of the armed security forces, who often shot at them with live ammunition. People died by dozens, while hundreds more were injured and many more detained. At least 16 Central Committee members, 5 Political Bureau members of the SCP, including its secretary Mohamed Mokhtar al-Khatib, were part of these many who were detained and shifted to undisclosed locations. Inspiring everybody was the fighting spirit displayed by Faiza Ibrahim Nuqud, an 80 year old woman member of the Central Committee, who was also detained. Armed soldiers, military vehicles, regularly ‘kept an eye’ on the SCP headquarters and it was put under surveillance. In spite of the detention of its leadership, the SCP continued with protests, appealing the people to maintain their unity and repel all efforts to divide them.

‘Overthrowing the regime, freedom, revolution as people’s choice’, became the major rallying cry for the masses. As a result of the sustained and determined struggle, the regime cracked. 20 parties which were part of the government and allied with the regime withdrew from the government and joined the demonstrating people. The Sudanese Professionals Association, an umbrella body of doctors, engineers, teachers and other professionals leading the protest campaign organised a ‘rally for women detainees’, where hundreds of women marched to the women’s prison, demanding the release of women detainees. The participation of women in large numbers attracted the attention of world media too, particularly the western media outlets, who were trying to keep the Sudanese protests under wraps, as they were against the dictator who is closely supported by the US.

Bowing to these protests (after three months), the Sudanese government released some political detainees. But Al-Bashir did not show any inclination to step down. Instead, repression once again increased. He declared national emergency and dismissed the federal government and sacked state governors. In their place, he appointed members of the army and security as governors. These measures further infuriated the people of Sudan, who responded by intensifying their protest.

In this background, the SCP called upon the people to be in ‘front lines of the protest movement’. Asking the people to ‘to remain vigilant and alert’, they called them to ‘double their actions’ by forming ‘popular democratic committees on the ground….help replace the existing pro-regime organisations’ and demand the ‘immediate release of all political detainees’. It pointed to the conspiracies by internal and foreign forces to ‘steal the struggle of the people and abort their revolution’.

US EFFORTS TO SAVE

On the other hand, US imperialism, assisted by its regional forces of reaction, doubled its efforts to save the dictatorial regime and abort the uprising. Egypt played a major role by rendering political and material support to the regime. It gathered support for Al-Bashir from Arab and African governments. US administration adopted a posture calling for the release of political detainees, but continued its efforts to split the opposition in pursuit of imposing its project for a ‘soft landing’ – accommodating  certain sections of the opposition in the government. The people refused to be carried over by these tactics and started occupying city squares in all the major cities, including Khartoum.

Al-Bashir tried all the tricks in the book to retain his hold over power, but in vain. Some army officers too joined the protesters. Unable to hold on further, he abdicated power on April 11, but ensured that his known henchmen take his place. This was not acceptable to the people, who forced them also to resign within 24 hours. The Military Transitional Council (MTC) which took their place, had declared a state of emergency for three months and ordered the protesters to stay at home by introducing night curfew. People resented these orders and continued their daily mass actions, defying the curfew. Sudanese people were not ready to be fooled by the military, as what was being enacted was a carbon copy of what had happened in Egypt to abort the January 2011 popular protests.

Due to the pressure exerted by the continued mass actions, the new military junta was forced to detain Al-Bashir and some of his close deputies. But the opposition forces refused to budge, demanding the immediate transfer of power to the representatives of the people, grouped as an alliance called ‘Forces’. They further demanded the ‘dissolution of the military council, holding to account all those who committed crimes against the Sudanese people, the cessation of war in Darfur and the restoration of peace in western Sudan’.

A series of meetings took place between the MTC and the opposition ‘Forces’, wherein the ‘Forces’ is recognised as the leader and representative of the people. It was also agreed to establish a joint committee to ‘discuss and resolve pending issues, including the transfer of power and the composition of the governing bodies’. Three members of the MTC, accused by the Forces for their proximity to the Bashir regime and Muslim Brotherhood, tended their resignations. But the main demand of the Forces – transfer of power to civilian representatives – was neither met, nor any timeline agreed for ensuring this process. This proved to be a major stumbling block, forcing people to continue with their protests.

With every growing day, new sections of people joined the protests. Judges wearing their black robes marched along with the people demanding judicial independence and civilian rule. Thousands of people continued with their sit-in in front of the army headquarters. Protesters also demonstrated against external meddling in the internal affairs of Sudan. The MTC tried to sow confusion among the people stating that Forces had accepted to ‘end the siege of the army headquarters’. The representatives of the Forces immediately issued a statement condemning the MTC and asked the people to ‘stand firm, reorganise and defend their positions’. In addition, they also stressed on the preparations for launching the ‘general political strike and the campaign for civil disobedience’.

With unrelenting popular pressure, the MTC was once again forced to continue its discussions with the Forces. Representatives of the Forces presented a document detailing its ideas on the governing bodies of the future Sudan. These bodies include the ‘establishment of a presidential council composed of representatives of the regions, an executive government, and a legislative body, to act as a parliament and a supervisor over the transitional period, after which national elections would be organised’. The MTC sought ‘short period’ for replying to the document, but instead of coming out with a reply to the document presented by the Forces, the MTC conducted a press conference and misrepresented the facts in order to confuse and divide the people. One such issue is the relationship between the State and religion, an aspect that was not dealt in the document, but was left to be dealt by the future constitutional body that would be constituted after the transfer of power to civilian authorities. With these moves, it has become increasingly clear that the MTC is trying to divert the popular struggle and continue to hold on to power and pursue the same policies as the ousted Al-Bashir.

The sit-in in front of the army headquarters is continuing since April 6. The MTC had stated on May 13 that unless the sit-in is lifted, it will not continue with the discussions. The discussions broke down as the armed forces once again opened fire on the demonstrators, killing four. The Forces representing the people of Sudan refuse to lift the sit-in unless a concrete agreement on the transfer of power and a proper road-map for democratic transition is reached. The stalemate thus continues in Sudan.

Occupying the streets and sustaining determined popular protests by maintaining unity of the people are the true strength of the Sudanese protests. And the SCP and Forces are confident that this is the only path that can ensure their success – achieving real freedom, both political and economic.