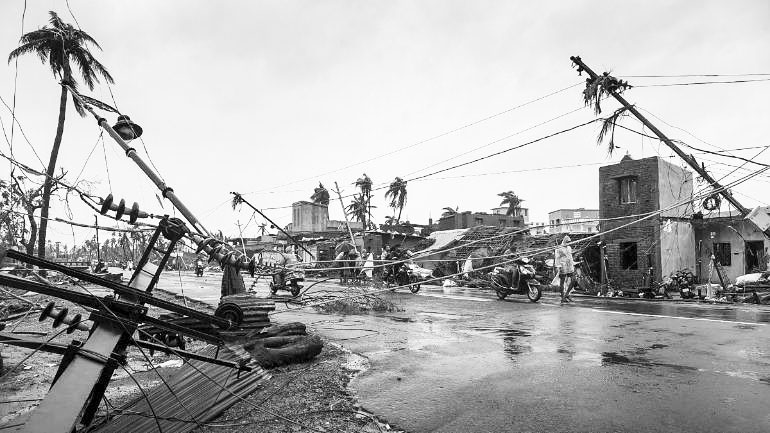 ODISHA is reeling under one of the worst cyclones since the Super Cyclone of 1999. The Fani Cyclone that hit the Odisha Coast wreaked havoc and unprecedented destruction of houses, crops, trees, electricity poles and also took the lives of around 70 people. More than 14 million people are estimated to have been affected in a region spread over 16,000 villages. Standing paddy crop, coconut trees, cashew trees and various other crops on 1,52,000 hectares are estimated to have been destroyed. Livestock has also faced the brunt with many animals reported killed. Even conservative estimates suggest that over 30 percent of crops in the state have been destroyed. Over 1,56,000 electric poles, about 80,000 kms of low tension wires bringing electricity to homes and 48,673 km of high tension cables have been damaged disrupting power supply. Even after more than a week of the cyclone, the affected areas are yet to see restoration of electricity and drinking water services. Discrimination in providing relief has also been reported.

AIKS, AIAWU and CPI(M) activists are on the field working to ensure relief for the affected people. A team of All India KisanSabha and CPI(M) including AIKS joint secretary and Party Central Committee memberVijoo Krishnan, JanardhanPati, veteran leader and former Central Committee Member of the Party, OdishaKrushakSabhasecretary Suresh Panigrahi and president YambeswarSamantaray, DYFI leader JatinMohanty, BapiMaharana and others visited the worst hit areas of Bhubaneswar, Puri, Khurda and main centres of destruction like Kanas, Tangi, Chandakaetc on May 9-10. By all accounts, the damage to crops and houses is second only to the Super Cyclone and more than the Phailin Cyclone.

The BJD government that is basking in glory over its supposed evacuation of 14 million people and minimising human casualties has failed to live up to expectations in providing relief and mitigating suffering on a war footing. The evacuation also was a result of people being informed in advance due to correct prediction of the cyclone and people moving on their own to cyclone shelters or concrete buildings that could withstand the cyclone. Infrastructure built after taking lessons from the Super Cyclone which killed more than 10,000 people has helped in protecting people. Surely, that the state government has constructed such a network of cyclone shelters over the last two decades is a positive sign despite the inadequacies to provide shelter for millions. The total flattening of houses mostly built of mud and thatched roof points to the crying need for proper housing in the state. Such an effort may have been far more effective to provide shelters for the people.

AIKS andCPI(M) held a protest in Bhubaneswar on May 10, against the tardy progress of relief work, superficial manner of relief, discrimination of adivasi areas and general apathy of the bureaucracy. Hundreds of affected people yet to get the interim compensation of Rs2000 per family, 50 kg of rice and polythene sheet, participated. CPI(M)state secretary Ali Kishore Patnaik, Vijoo Krishnan,  JanardhanPati and others addressed the protest. A memorandum was given to the authorities.

In the wake of such destruction of livelihoods and dwellings the state and central governments were expected to deal more sensitively. The declared relief andrehabilitation package is as follows:

§     Puri and Khurda being worst affected, the government has announced that all families covered under Food Security Act will be provided 50 kg of rice plus Rs 2000 and polythene.

§     Cuttack, Kendrapada and Jagatsinghpur districts that are moderately affected are being provided Rs500 plus additional one month quota of rice.

§     One month additional pension in all the affected districts.

§     House building assistance as per relief code i.e.,Rs 95,100 for fully damaged structures, Rs 5,200 for partially damaged structures and Rs 3,200 for minor damages will be provided. For all other affected districts, relief to be distributed as per NDRF/ SDRF norms.

The government has also announced that houses completely damaged will be reconstructed under housing schemes expeditiously; loss of agriculture and horticultural crops and animal resources, fisheries will be assessed and compensated accordingly. Ex-gratia was declared according to Prime Minister's National Relief Fund at Rs 2 lakh each for the next of kin of the deceased and Rs 50,000 each for the persons and seriously injured.

6)              Alternative accommodation for affected people to stay till permanent solution to housing problem.

7) Provide work to all urban and rural labourers and unemployed youth by involving them in the reconstruction work with minimum Rs600wage per day.

8)              The government should seize the opportunity to provide concrete pucca houses for all in Odisha including homeless by providing minimum Rs4 lakhs per family.

9)               NDRF and PMNRF guidelines must be changed to increase the compensation amount due to natural disasters. At least Rs10 lakh should be provided to kin of deceased.

AIKS also demands an all-party/organisationmeeting and team to assess damages including representatives of kisan and agricultural workers organisations.