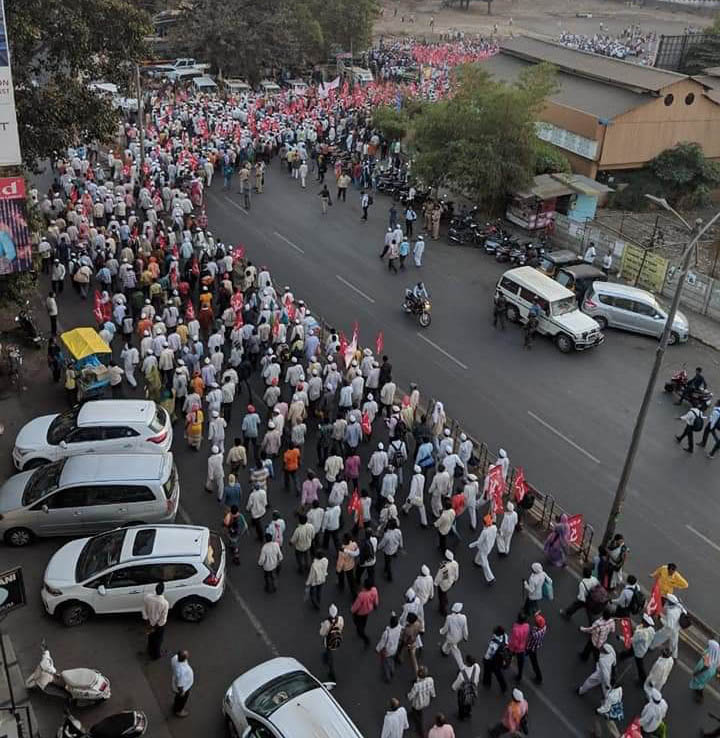 NEARLY a year after the first Kisan Long March from March 6 to 12, 2018, the AIKS Maharashtra state council held at Nashik on February 4, 2019, took the major decision of launching a second massive Kisan Long March in defence of the rights of the peasantry. This long march, which will begin from Nashik on February 20, the martyrdom anniversary of Comrade Govind Pansare, will culminate in Mumbai on February 27, the martyrdom anniversary of Chandrashekhar Azad. The state assembly’s budget session begins in Mumbai on February 25.

This long march is expected to be double in size compared to the one held last year. While the last long march began with around 25,000 peasants, this time the number at the starting point is expected to cross 50,000. Along with the lion’s share of farmers from Nashik district, this time there will be a huge contingent from Thane-Palghar district, followed by Ahmednagar district. Several other districts in Marathwada, Vidarbha, Western Maharashtra, Northern Maharashtra and Konkan regions will also be well represented.

The AIKS has planned this march to condemn the BJP-led state and central governments for the utter betrayal of their own assurances given to farmers and agricultural workers. This betrayal has further intensified the grave agrarian crisis. This march is, therefore, being held with three major objectives in mind.

The first objective is to take the BJP-led state government to task for its poor implementation of the demands that it had conceded in writing last year. At the insistence of the AIKS, the chief minister had also placed the written agreement with the Kisan Sabha on the floor of both houses of the legislature the very next day on March 13. In spite of giving a commitment to that effect and in spite of the repeated reminders by the AIKS, the state government did not hold even a single review meeting during the whole of last year with the AIKS to take stock of the implementation of the demands that had been conceded. Thus, issues like the implementation of the Forest Rights Act (FRA), extension of loan waiver (only Rs 17,700 crore out of the package of Rs 34,000 crore that it was forced to announce after the 11-day farmers’ strike in Maharashtra in June 2017 has been disbursed), remunerative prices, increase in pensions and other demands are still not implemented.

The second objective is to focus on the grim drought that has severely affected half of Maharashtra this year. The response of the state government to the plight of the people hit by drought has been scandalous. The eight districts of Marathwada region are the epicentre of this drought, although large parts of Vidarbha and other regions are also affected. The AIKS in its demands charter has highlighted two types of demands – those for immediate drought relief like drinking water, food, employment under MNREGA, fodder for cattle, compensation to farmers for their crop loss, a comprehensive crop insurance scheme to help farmers and not corporate insurance companies, and those of a long term nature concerning completion on a war footing of incomplete irrigation projects and diverting the massive water of west-flowing rivers that empty into the Arabian Sea by various methods to the chronically drought-prone areas of Maharashtra.

The third objective is to denounce the Narendra Modi-led BJP central government for its callous and ‘jumlebaj’ attitude to farmers and agricultural workers. The BJP regime has betrayed both the commitments made by its prime minister in over 400 election meetings in 2014, of giving a complete loan waiver and of implementing the recommendation of the Swaminathan Commission of declaring MSP at one and a half times the entire cost of production (C2 plus 50 per cent). While denying loan waiver to the peasantry, it has had no qualms about granting loan waivers of lakhs of crores to its crony corporates. And in its last budget, by promising crumbs of Rs 6000 per year (which works out to a pittance Rs 3.33 per head per day) in three instalments of Rs 2000 each to farmers with less than five acres of land, it has added insult to injury and has rubbed salt into their wounds. Millions of landless agricultural workers, tenant farmers, adivasi farmers who have still not been given land under the Forest Rights Act (FRA) and dryland farmers who often have more than five acres of land, will be denied even this pittance offered by the Modi regime. The BJP government’s undermining of MNREGA, the lifeline for agricultural workers, is only too well known. Its forcible land acquisition policies have been and are being resisted by the peasantry.

In order to stop the AIKS-led second Kisan Long March, the government has taken recourse to repression. In Ahmednagar, a large farmers' convention was held on February 13 to prepare for the long march and a memorandum was submitted to the district collector. Nowhere was there any breach of peace. All necessary police permissions were taken.

But just for organising this convention, police cases have been lodged against AIKS state general secretary Ajit Nawale and concerted attempts to arrest him for the last few days have been foiled. Threats are being given to local activists in many places by the police to prevent them from taking part in the march. News has just come in that the police are trying to prevent farmers from Thane-Palghar district who are coming in large numbers in vehicles from coming to Nashik. It is crystal clear who is behind all these steps.

The AIKS at the national level has condemned this act of the government as an attempt to crush a democratic and peaceful satyagraha struggle. The AIKS has warned that such repressive attempts of the government will not succeed in stopping the long march. The government must realise that farmers' issues can be solved only by accepting their just demands and by implementing them.

TALKS WITH THE CM

During last year’s long march, there was no official response from the state government until the second last day, when the march entered Mumbai, and tremendous public pressure was built up in support of the march. This time around, the government was naturally nervous and chief minister Devendra Fadnavis invited an AIKS delegation to meet him well in advance. Two meetings were held by the chief minister with the AIKS delegation – the first preliminary one on February 11 and the second full meeting on February 17 in which other concerned ministers and officials were also present. However, the talks were inconclusive and the AIKS made public its determination to go ahead with the long march.

The march began on February 20th evening from Nashik. AIKS general secretary Hannan Mollah led the march on the first day. It remains to be seen what the government does.

But one thing is clear. Farmers in Maharashtra will not rest until the major issues that are being taken up in this second long march are resolved.