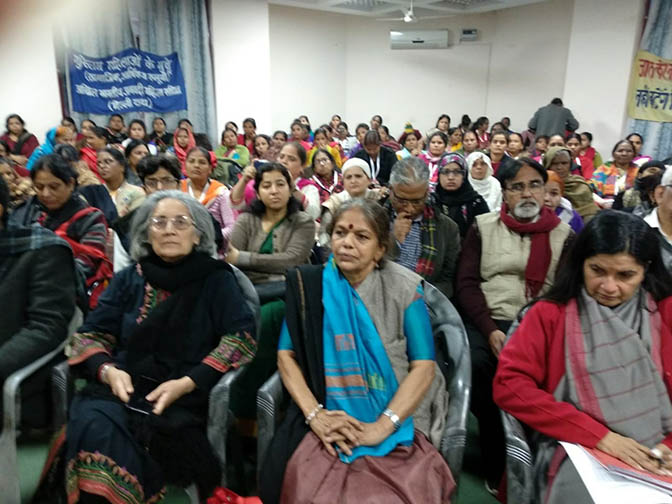 “JANWADI Mahila Samiti has given us an identity, it has taught us how to stand and fight for our rights”

“When I move around in my mohalla, people say: look here comes a leader of the Janwadi Mahila Samit. This organisation has given me dignity and respect”.

The sentiments expressed above are not of any one particular woman, but they represent the collective spirit of the 13th conference of the Delhi Janwadi Mahila Samiti (JMS) which took place from February 15-17, 2019 at the Manjari Gupta Hall, BTR Bhavan in Delhi.  The conference was attended by 140 delegates from 123 units and reflected the collective resolve and spirit of struggle that all the cadres of the organisation have been engaged with in the last three years. This was reflected in the high enthusiasm of the women who celebrated their work through songs, dance and intense discussion on the future course of action.

The conference began with the hoisting of the AIDWA flag by Bharpai, one of the senior most leaders of the Delhi women’s movement. This was followed by tribute to the martyrs and the inaugural session of the conference. At the outset, Maimoona Mollah, president of the Delhi state committee, welcomed the delegates and placed the condolence resolution which paid homage to leaders of progressive movements around the world as well as of the women’s movement in Delhi and the rest of the country. The delegates observed a one minute silence in honour of the revolutionary leaders of the progressive movement.

This was followed by the felicitation of the leaders of fraternal and other women’s organisations. The chief guest, Dr Nandita Narain, who is a leader of the Delhi University Teachers Movement, was also felicitated before she delivered her inaugural address. Nandita Narain reminded the delegates of the importance of linking the fight against neoliberal policies which have led to disinvestment in public education and the anti-constitution right wing communal agenda. She also emphasised that a women’s movement like the JMS should take active part in the struggles in defence of public education, and hoped that in future JMS would also participate in the struggles on issues impacting higher education. She invited the JMS to become a part of the protest march on February 19.

This was followed by greetings by fraternal delegates from CITU, AILU, DSMM, DYFI and others. Leaders from AIMLU and NFIW also greeted the conference.

The issues placed by the general secretary were discussed by delegates on the second day. About 30 women from all districts and organising committees participated in the discussions and shared their perspective regarding national issues and their local struggles. Their testimonies highlighted the trials and tribulations of organising women under these trying circumstances. Some of these points are elaborated in the debate. First, in almost all districts and regions of the state there have been successful struggles on the issue of ration cards and biometric machines. Delegates pointed out that they were working class women with hands where clear biometric imprints were impossible to record. Hence even though they had given their imprints, the machine was not able to read their fingers because of the changes in the imprints of ‘labouring hands’. To a thunderous applause, several delegates successfully shared how they had been able to successfully stop the use of biometric machines. The future focus of their struggles would be on getting 35 kg of grain for every family. The second issue highlighted by the delegates was that of the lack of decent working conditions and joblessness. The home based workers of East Delhi reported that they had stopped getting work after demonetisation. Similarly in Karol Bagh, the imposition of the GST had made their small scale businesses unviable. Similarly delegates from outer North Delhi district also highlighted the plight of the women in the informal sector, particularly waste pickers and safai workers. Several districts also showcased their work with domestic workers and highlighted the new forms of economic and non-economic discrimination against these workers. The delegates from North West Delhi also raised the issue of the failure of the Skill India Programme for the youth. The third issue raised by several delegates was about the need to organise and take up the problems of single, deserted and divorced women. Delegates, especially from the minority communities, pointed out that the Modi government was trying to fool women by talking about triple talaaq, but it was not providing any support to single or divorced women. The fourth issue that was highlighted was the need for communal harmony and the widespread struggles to combat the influence of the BJP/RSS. The delegates from East Delhi also highlighted their prolonged work in one particular area to maintain peaceful co-existence amongst communities. The political nature of communal violence was stressed by the speakers. Another major issue flagged by the women was the question of increasing violence. Women from all districts recounted their experience on interventions in cases of rape, domestic violence and violence in the workplace, especially violence against domestic workers. Apart from these concerns, diverse experiences and strategies of struggle were also narrated by the women. These showed that the organisation has expanded the scope of its work and covered new sections of the society. It was also pointed out that the organisation needed to expand its work amongst the youth and middle class women. This should be a part of its future work.

AIDWA patron, Brinda Karat also addressed delegates and recalled her association with the organisation. She spoke of the current political challenges before the organisation. Former Delhi general secretary Ashalata also addressed the delegates and congratulated them for their work. S Punyavathi, AIDWA all India vice president was present on the dais.

The report of the credential committee was prepared by Piyali Ghosh Sen, Satarupa Chakraborty and Madhu. The report highlighted the fact that a large section of the 140 delegates within the conference belonged to the dalit and minority communities. This showed that the historically oppressed and those facing discrimination form a large part of the social basis of the organisation. A majority of the delegates also belonged to the poorer sections with a large number having no income. The organisation had also made some dent in the youth, but a lot more needs to be done.

The last session of the conference was on the election of the committee. A 40 member state committee with three special invitees was elected by the delegates. At its first meeting, the state committee elected a 17 member secretariat with Maimoona Mollah as president, Asha Sharma as general secretary and Papiya Majumdar as treasurer. Two elderly comrades, Bharpai and Tapati, were relieved from their work in the state committee and appointed as patrons of the organisation. They were also felicitated by the president and general secretary of the organisation.

The conference ended with the concluding speech by AIDWA general secretary Mariam Dhawale, who outlined the major organisational and political challenges ahead. She also congratulated the women for their fighting spirit and successful struggles.

The conference ended with music, dance and loud slogans which celebrate the spirit of resistance of the struggling women of Delhi.