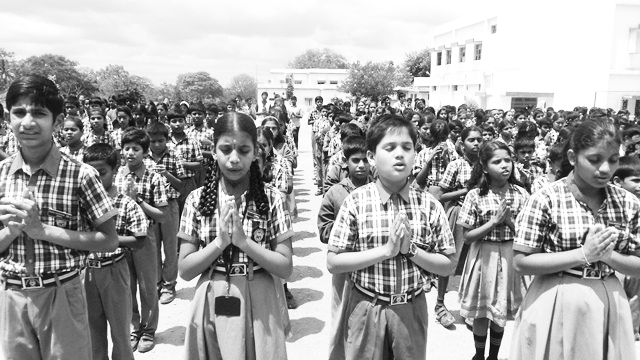 On Recitation of Hindu Religious Shlokas in Govt Schools

A PUBLIC Interest Litigation (PIL) against recitation of Hindu religious shlokas in Kendriya Vidyalayas, filed by Veenayak Shah, an advocate from Jabalpur, Madhya Pradesh, has been pending before the Supreme Court since January 2018. A bench of Justice R F Nariman and Justice Naveen Sinha decided to refer the case to a constitutional bench as the issue was of “seminal importance”. In the meantime, Solicitor General Tushar Mehta, presenting arguments on behalf of the government, made a statement which assumed much importance. He expressed his concern over the PIL, saying that tomorrow someone may challenge "Yatho dharma thato jaya", the motto of the Supreme Court written over its emblem. When such crucial things are coming up it is important to know about what is a secular state and its status in government schools.

According to Wikipedia, "secular states do not have a state religion. Government shouldn't show either favouritism or disfavour with respect to any religion. It should be neutral towards religion and customs. Should not give importance to any religion. Shouldn't encourage, provide opportunities, allot funds to religions and programmes of religions.” Standard dictionaries define that “a secular state has no relation with religion and spirituality”. There are 96 countries that are recognised as secular states.

Several countries, though have secular tag, are following religious practices. India is one such country where the secular state is following religious practices and fulfilling the requirements of religions -- following religious practices in official matters and providing grant-in-aid to institutions run by religion bodies. There are protests opposing religious practices and agitations for upholding secular values too. A part of such struggles is the opposition to Hindu religious practices in Kendriya Vidyalayas. The children of petitioner are studying in Kendriya Vidyalaya. He complained that in Kendriya Vidyalayas as part of morning prayer, students recite "Asatoma Sadgamaya, Tamasoma jyotirgamaya, Mrutyorma Amrutangamaya, Om Shanti Shanti Shanti". It is from 'Brihadaranyaka Upanishad'. He sought a ban on it, claiming it promotes religious faith, beats scientific temperament and is against the Constitution. Article 28(1) of the Constitution orders that “no religious instruction shall be provided in any educational institution wholly maintained out of state funds”. Article 51(h) says that it is the fundamental duty of every citizen of India, "to develop the scientific temper, humanism and spirit of inquiry and reform". KVs are fully funded by the central government, catering to the children's educational needs of who are working in all India transferable services, i.e. central government employees, defence and paramilitary forces. These schools having same syllabus, uniforms, prayer and academic calendar.

The similar Hindu recitations are being done in Jawahar Navodaya Vidyalayas, also funded by the government. JNVs, known as "centres of excellence", provide residential education with well-equipped accommodation and nutritious food to talented rural children. Its alumni Alokananda Bisoyi said that Hindu recites are going on in JNVs. He has written his experience in online platform,youthkiawaz.com. He explained, at the time of having food students recite shloka from Krishna yajurveda taittiriya Upanishad, "Om sahanava vathu, saha nav bhunaktu, saha veeryam karavahav, tejesvinav adhitham, asthu maa vidvissavahav, Om shanti shanti shanti." In the morning assembly every day, one student has to tell one shloka and its meaning from Bhagavad Gita or Vedas.

It is true that in state government schools also Hindu practices and procedures are followed. On the occasions of Independence Day, Republic Day and Gandhi Jayanthi, coconut offering and lighting of incense sticks are done. Installation of Ganesha idols in schools and organising pujas during Vinayaka Chavithi days are also done. Isha Foundation and Akshaya Patra Foundation are allowed into schools in the name of yoga instruction and mid-day meal. Installation of saraswati idols has become a routine affair. Lessons from Ramayana, Mahabharata, Bhagavad Gita are being taught, besides observing surya namaskaras in several BJP-ruled states. The most controversial Guru Asaram Bapu's life is a lesson through 'Saints' chapter for class three students in Jodhpur district of Rajasthan. He has been in jail since 2013 in a case of sexual assault of a 16-year-old girl in his ashram.

Schools are microforms of society. Secular values should be instilled in students. Religious practices and procedures must be discouraged in educational institutions. Lessons related to religion/faith should be banned. Teachers can do this but due to dominance of Hindu religion in country, they are not able to do it properly. Though the progressive thinking teachers are in considerable strength, effective protests are not emerging. Let us hope the case between Veenayak Shah v/s Government of India will strengthen the foundations of secular state in education sector.