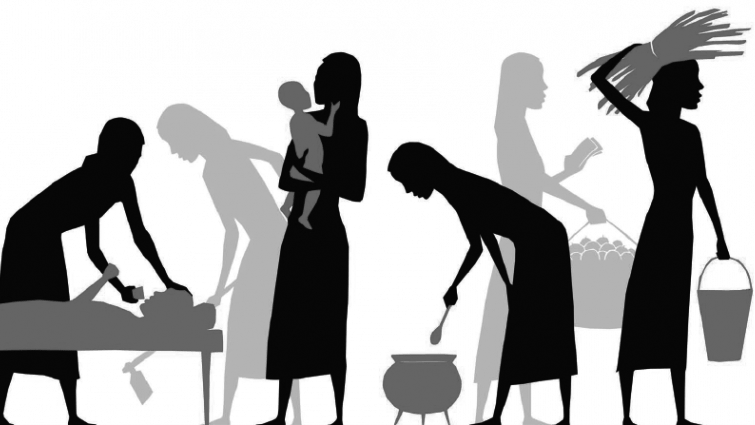 Struggle to Bridge the Gap

I've got the children to tend
The clothes to mend
The floor to mop
The food to shop
Then the chicken to fry
The baby to dry
I got company to feed
The garden to weed
I've got shirts to press
The tots to dress
The can to be cut
I gotta clean up this hut
Then see about the sick
And the cotton to pick.
Shine on me, sunshine
Rain on me, rain
Fall softly, dewdrops
And cool my brow again.
Sun, rain, curving sky
Mountain, oceans, leaf and stone
Star shine, moon glow
You're all that I can call my own.

This poem captures well the everyday life of a woman, even in the present circumstances. They work more, are unpaid or paid less and own next to nothing.

A recent report by Oxfam points out that the unpaid work done by women across the globe amounts to $10 trillion a year, which is equivalent to one-eighth of the world’s entire GDP. Care work assumes substantial part of this unpaid work done by women. In India, the unpaid care work done by women is worth 3.1 per cent of the country's GDP. Women in India spend 5.2 hours a day (312 minutes) in urban areas and 4.8 hours a day (291 minutes) in rural areas on such unpaid care work. In comparison, men spend only 29 minutes in urban and 32 minutes in rural areas on unpaid care work. This amounts to women doing almost 10 times more care work than men. And this is often on top of their paid work. Women work longer days than men when paid and unpaid work is counted together. Studies indicate that globally, a young woman today will work on average the equivalent of four years more than a man over her lifetime.

The Oxfam study also referred to India's poor ranking on the Global Gender Gap Index of 2018. India stood at the 108th place, 10 notches less than in 2006 and far below the global average and behind its neighbours China and Bangladesh.

Apart from prevailing patriarchal ideas in the society, the growing gender gap and discrimination of women in workplaces is also related to the economic policies pursued by the government. When public services are not provided by the State, poor women and girls suffer most. The neoliberal economic policies pursued by successive governments have undermined investment in infrastructure and public services like education, healthcare and social protection. This has led to women having to bear an increased responsibility for unpaid care work. The investment in all social sectors is going down, which is adversely affecting women right from their childhood and it is also intensifying the problem of unpaid work.

Women’s disproportionate responsibility for this work curtails the amount of time that they have to go to school and earn a living.

The absence of creches means that young girls are forced to take care of their siblings at the cost of foregoing their school. This deprives the country of a vast intellectual resource base.

Lack of basic amenities and infrastructure across the country also has affected women’s work. According to a study on gender wage discrimination in Indian labour market, a significant share of unpaid women workers (40 per cent in rural areas and 22 per cent in urban areas in 2011-12) were dominantly involved in fetching water for household consumption, an activity that takes more time than before. More than half of the poorest women had to do this, as well as to collect biofuels for cooking as they did not have access to or could not afford other fuel. In addition, cooking, cleaning and generally looking after healthy adults – all of which are dominantly seen as the responsibility of women in the household, add on to the unpaid and unrecognised work done by women.

Apart from these extended domestic tasks, there are the various activities associated with the “care economy”: care of the young, the old, the sick and the differently abled. If we look at public health, we find that the government is starving it of funds, and as a result, women are having to take the burden of caring for the ailing person in the family. This clearly indicates that absence of basic amenities was an important factor driving the increase in unpaid work performed by women. Recent research shows that globally, 57 million unpaid workers are filling in the gaps caused by inadequate healthcare provision. The majority are women who have given up employment to carry out this role.

Ironically, when these services are outsourced and provided commercially, the providers are seen as workers in India; but when they are performed by women within households, such women are classified as “not in the labour force”. But wait. They are not seen as ‘workers’ too, when they are hired for care work. The government which employs Anganwadi workers who perform most of the care work, does not consider these women as workers, and rather sees them as ‘volunteers’ and hence does not pay them wages, but doles out a paltry ‘honorarium’! Similar is the case with the ASHAs and all other women workers who are given fancy names by the government, and are exploited of their labour.

This lack of recognition of a significant part of the work dominantly provided by women has several important economic and social implications. It serves to devalue both women and the work they do. One of the effects is, when women do enter labour markets, their wages tend to be lower than those of men. India has one of the largest gender gaps in wages to be found anywhere in the world. Our country's gender pay gap is at 34 per cent. Bharat mata ki jai!

75 percent of women in developing regions are in the informal economy, where they are less likely to have employment contracts, legal rights or social protection, and are often not paid enough to come out of poverty.

The Oxfam report points out that gender inequality in the economy costs women in developing countries $9 trillion a year – a sum which would not only give new purchasing power to women and benefit their families and communities, but would also provide a massive boost to the economy as a whole. But this is not ensured, and there are strong efforts to keep wages at lower levels, maintain a vast reserve army of unemployed/underemployed and continue to reap super-profits.

Evidence from a number of regions and countries shows closing the gender gap contributes to reduction in poverty. In Latin America for instance, according to an Oxfam study, an increase in the number of women in paid work between 2000 and 2010 accounted for around 30 per cent of the overall reduction in poverty and income inequality. It shows that gender equality and economic empowerment are inter-related and can be realised only through an uncompromising struggle against neoliberal economic policies.

It is for this reason that organising women workers and joining their fight for recognition of their work is imperative. To be paid for the work done should naturally follow. Having access to quality and secure work and better livelihoods is vital for bettering the future of our country. And this is not some ‘socialistic agenda’, but its prelude, a basic democratic and humanistic agenda. Joining and strengthening the struggles to realise this agenda determines ‘which side are you on...’