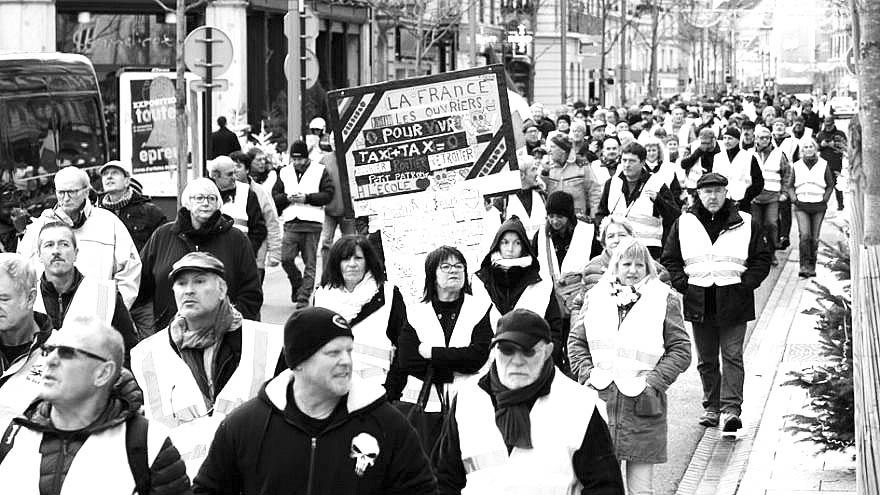 ON Saturday January 19, ordinary French people in their tens of thousands were again out on the streets of France, sporting the yellow safety vests that have become a global symbol of revolt. Since materialising as if from nowhere on November 17, 2018, and despite full-on brutal State efforts to contain it, the movement of the Yellow Jackets (Gilets jaunes) continues to confront French President Emmanuel Macron with his gravest crisis yet.

It speaks volumes that this new movement, together with its symbolic marker – the fluorescent yellow jacketall motorists in France must carry in their cars – is already instantly identifiable across the world. What began as a protest against threatened fuel tax hikes following months of price rises at the pumps has morphed into a mass phenomenon of global reach: that of ordinary working people taking to the streets to repudiate austerity, obscene levels of inequality, sham democracy and the lie, first voiced by Margaret Thatcher back in the 1980s, that ‘There Is No Alternative’ (TINA) to neoliberalism.

The Yellow Jackets uprising – a fluid, broad-based movement of diverse composition – is thus far proving a more effective counterweight to Project Macron than more orthodox forms of protest. Previous trade union-led attempts to block Macron’s assault on labour protection laws and the public sector, which included rolling strikes by railway workers during the first half of 2018, were scuppered by Macron’s overwhelming parliamentary majority and readiness to resort to ordinances to force legislation through.

The ability of the Yellow Jackets to mobilise very large numbers of people in every part of France on a systematic, weekly basis has already wrung minor but symbolically important concessions from Macron.

In December 2018, the government announced the ‘postponement’ of the fuel tax hikes, planned for the start of the new year, which had ignited the Yellow Fury the previous month. On December 10, during a televised address to the nation from one of the most extravagantly ornate chambers of the Élysée Palace, Macron unfurled further concessions: a modest rise in the minimum wage; a promise to make overtime pay tax-free from 2019; a request to “all employers who can” to pay workers an end-of-year bonus; and the withdrawal of a planned tax increase for pensions below a certain threshold.

None of this has proved remotely up to the task of defusing the Yellow Jackets movement or of responding to its core demands. Neither protestors nor the public at large have been persuaded by Macron’s hectoring, finger-wagging manner of addressing his fellow citizens, whom he has described as ‘fainéants’ (layabouts), unwilling to put in the necessary effort, and preoccupied with ‘rights’ rather than ‘duties’. Coming from a millionaire former banker whose lavish spending habits and grotesquely superior ways are a matter of public record, such comments reinforce popular fury.

With Christmas approaching, it was evident that Macron’s attempt to rein the movement in by dangling a few baubles had been comprehensively rejected. On December 15, anger and defiance lit up the streets as much as the seasonal illuminations; shoppers confronted shuttered stores and streets choked with tear gas, irrigated by water cannon and primed for running battles between protestors and riot police. In Toulouse, city centre protests were augmented by a separate mobilisation blocking traffic on the city’s inner motorway ring. The thousands who marched through Marseilles did so behind a banner declaring ‘France is not for sale!’ In Nantes, barricades were erected on tramway lines; the Christmas market closed early; the stench of tear gas lingered in the air.

The ability of the Yellow Jackets to continue mobilising very substantial numbers across France throughout the long Christmas/new year break says a great deal about the staying power of this movement. By thus maintaining the momentum, they laid the basis for a powerful resurgence in early January, one that has caught the government and its vocal allies in the mainstream media off-guard.

What explains the durability of this movement? What underlies the willingness of tens of thousands of ordinary working people to take to the streets every Saturday, contending not only with bitter winter temperatures but also with a State apparatus of repression unparalleled in Europe for its brutality?

It bears emphasis that, in France, taking part in a demonstration puts citizens at significant risk of physical injury at the hands of the police. This is explained partly by a law and order ‘philosophy’ which favours brute force over de-escalation. French security forces are also heavily militarised; they carry guns as well as batons, and have access to a range of hand-held, high-velocity ‘non-lethal’ weapons, many of them banned elsewhere in Europe. This arsenal includes stun grenades packed with rubber projectiles and defence ball launchers capable of projecting 40 mm (1.6 inch) rubber bullets at close range and at incredible velocity.

The routine deployment of such weapons against the Yellow Jackets has resulted in an ever-lengthening litany of horror: more than 100 cases of serious injury are on record since the start of the movement, including multiple cases of people losing an eye or having a hand or limb torn off by impact.

Repression has also taken the form of mass arrests (more than 5,000 thus far), multiple incarcerations, and high-visibility targeting of ‘leaders’: well-known faces or particularly feisty figures within a movement whose lack of formal organisational structures makes it tricky for the authorities to combat in conventional ways. Hence the announcement, by Macron’s attack-dog prime minister, Edouard Philippe, of the placing before parliament of a new raft of legislation against people’s right of assembly and protest; the details will be unveiled in February.

In tandem with this show of ‘ultra-severity’, the government is seeking to woo the French general public via a ‘Great National Debate’ whose ostensible function is to ‘listen’ to their pain. In predictable top-down style, the debate, which got under way on January 15, will proceed according to a straitjacket agenda decreed by Macron himself. As such, it seems as unlikely as his televised speeches to do much more than trigger further anger and contempt. Across the social media, spoofs are proliferating, with mayors who have participated in ‘great debate’ events speaking out on the disconnect between this ersatz exercise in democracy and the real thing. A recent poll underlines the sceptical public mood, with 70 per cent of those sampled doubting the ability of Macron’s consultation to achieve anything of substance. Sixty per cent affirmed their continuing support for the Yellow Jackets (the latest polls show Macron’s own popularity nudging 20 per cent).

Meanwhile, across France the real ‘great debate’ continues. Beyond the Saturday mobilisations (described as Acts; that held on January 19 was Act X), the Yellow Jackets are holding meetings throughout the week, flexing their democratic muscles as they stiffen their resolve. There is something profoundly moving about this nationwide process of discussion and debate,which is throwing up a rich variety of demands: from calls for Macron’s immediate resignation to demands for lower taxes for ordinary people and the reinstatement of the wealth tax on the country’s super rich (which Macron abolished soon after becoming president in 2017). Another key demand is for the overturning of France’s top-down political decision-making process by enabling citizens to initiate referendums on important questions of the day. Overall, the demands have an anti-austerity, pro-public sector thrust; they reveal profound anger with growing inequality in France; they are clear  that, contrary to Macron’s 2017 promise to ‘do politics differently’, conditions of life for working people in France are getting ever harsher.

Despite efforts by the far right to clamber aboard, the Yellow Jackets movement continues to move left. While still somewhat wary of traditional organisations of the left, whether trade unions or political parties, the Yellow Jackets have been holding joint meetings with trade unionists at the local level and there are growing calls for strike action, particularly from Toulouse and Bordeaux, which have staged some of the largest and most militant displays of Yellow Jacket mobilising power.

Whatever its ability to sustain the extraordinary momentum built up over just a few short weeks, the Yellow Jackets movement provides a living, breathing and gloriously defiant model of how to fight for a better future. Since first hitting the streets, tolls, roundabouts and motorways in mid-November, the Yellow Jackets have kept the French State on its toes Saturday after Saturday, never relenting, never yielding. No part of France – whether the glitzy Champs-Élysées in downtown Paris, or big regional cities such as Bordeaux, Lille, Nantes, Rouen, Caën and Toulouse, or small communities off the tourist map – has been left untouched by their electrifying presence. Neither bitter winter weather nor the extraordinarily violent response of the French security State has driven them off the streets.

Expressing the anger, determination and creativity of hundreds of thousands of hard-hit working people, the Yellow Jackets movement offers hope and a way forward. Still in nascent form, with many challenges to be embraced or overcome, it stands four-square in the global battle against austerity, neoliberalism and the obscenity of billionaire command of a dying planet.