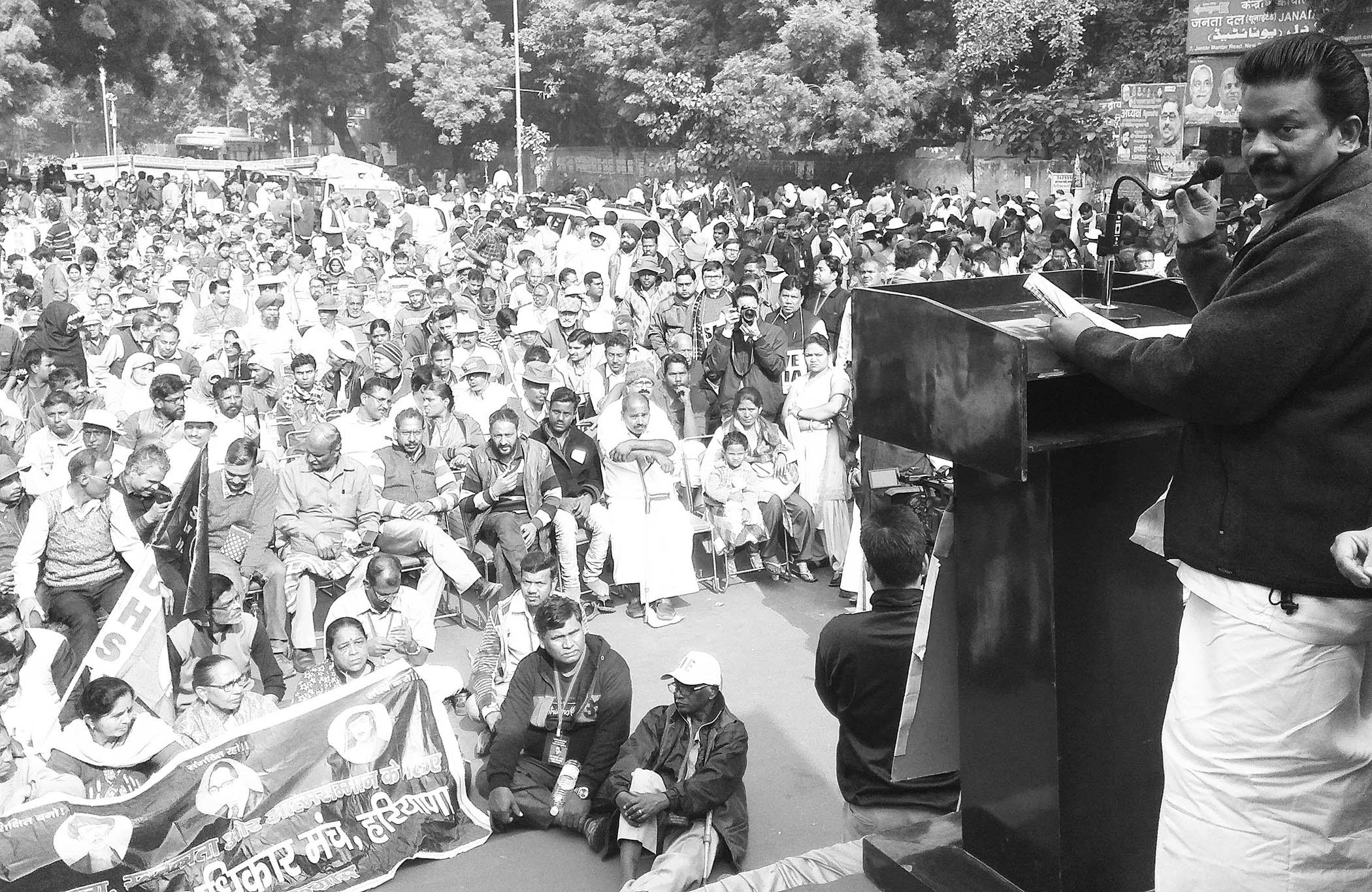 ON December 20, thousands of activists of Dalit Shoshan Mukti Manch (DSMM) marched through the streets of Delhi and held a protest demonstration at the Parliament Street. They gave a clarion call to defeat “Manuvadi BJP” in the upcoming Lok Sabha elections to defend dalit rights and to save the constitution.

K Radhakrishnan, president, DSMM and former speaker of Kerala assembly termed the Modi led BJP government anti-Dalit and said four and half years have passed but this government did not take a single step to deliver justice to the dalit community of the country. He appealed DSMM workers to unleash a campaign to dethrone the BJP from the centre.

Subhashini Ali, vice president of DSMM, said that time has come for dalits to assert themselves so that their economic, social and political rights can be protected which are ensured in the constitution of India. There is a deliberate attempt to subvert the constitutional provision given in the constitution. Therefore, fight against the subversion of dalit rights needs to be intensified.

Ram Chandra Dome, general secretary of DSMM and former MP, said there is an all-out attack on dalits since Modi took over the central government.  He said, the secular democratic constitution that was written by Babasaheb Ambedkar is under severe threat. Casteist and communal attacks are on the rise in different parts of the country, especially in the BJP ruled states. He said that the theme of the Delhi march is “save constitution – save dalit rights”.

Livelihood of the working people (a majority of whom are dalits and adivasis) is under severe attack due to the anti-people policies of the central government. Joblessness of the educated unemployed youths is increasing and due to privatisation of the public sector, rights of dalits and adivasis and other backward communities are totally smothered. Health, education are other sectors where the dalits and adivasis are being denied their rights.

On the other hand, due to Manuvadi philosophy followed by the RSS-BJP to set up a brahmanical society to convert India into a so-called Hindu Rashtra, all-out attacks on the dalit-adivasi and the minority people in our country are rampant.

Atrocities on women especially on dalit and adivasi women – both physical and sexual attacks are on the rise. False and fabricated cases are lodged against dalit activists.

Jitendra Choudhury, PK Biju, and Jharna Das – all MPs, also addressed the gathering and extended their support for the cause.

The ‘parliament march’ has highlighted the following issues concerning dalits