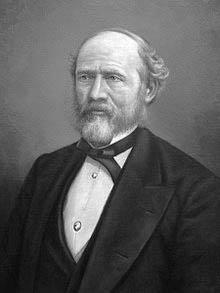 LEWIS Morgan, who had made great contributions to the study of the evolution of human race and social changes, was born in 1818, the same year in which Karl Marx was born.

Morgan laid down the foundational principles for the study of man’s progress from primates to human beings through evolutionary stages, involving various types of social structures, including the institutions of marriage and family. He had prepared the text of his studies on family relationships and marriage between blood relations in book form in the year 1867, the same year in which the first volume of Karl Marx’s ‘Das Kapital’ was published. But Morgan’s book ‘Systems of Consanguinity and Affinity of the Human Family’ was actually printed and published only four years later in 1871, after proper evaluation of his premises by a team of experts. Morgan continued his research on his favourite field of study even after the publication of the book.

It was his further studies that led to the publication of his most famous thesis on primitive societies in 1877, six years before the death of Karl Marx. Marx and Engels read it with avarice. Marx made a thorough reading of the book and prepared detailed notes as he had done in the case of Darwin’s ‘Origin of the Species’. But he could not write a critical review of the book as he was preoccupied with other more urgent ideological and organisational works as well as the sad demise of his beloved wife and his own health.

It was left to Engels to complete the task by writing ‘The Origin of the Family, Private Property and the State’, in the light of the researches of Lewis H Morgan in 1884, a year after the demise of Marx, partially in fulfilment of his obligation to his dear friend.

In the preface to the first edition of the book, Engels wrote as follows:  “It was no less a person than Karl Marx who had planned to present the results of Morgan’s researches in connection with the conclusions arrived at by his own – within certain limits I must say our own – materialist investigation of history and thus to make clear their whole significance.  For Morgan rediscovered  in American, in his own way, the materialist conception of history that had been discovered by Marx, forty years ago, and in his comparison of barbarism and civilisation was led by this conception to the same conclusions, in the main points, as Marx had arrived at. And just as capital was for years both zealously plagiarised and persistently hushed upon the part of the official economists in Germany, so was Morgan’s Ancient Society treated by the spokesmen of `prehistoric’ science in England….Morgan’s great merit lies in having discovered and reconstructed this prehistoric foundation of our written history in its main features….His book, however, was not the work of one day. He grappled with his material for nearly forty years until he completely mastered it.  That is why his book is one of the few epoch making works of our time.”

Engels must have made the above observation keeping in mind the contemptuous indifference and studied silence of the bourgeoisie towards the first volume of Marx’s ‘Das Kapital’ when it was published ten years ago in 1867. Engels makes his emphasis clear through the subtitle of his work: ‘In the light of the researches of Lewis H Morgan’. His intention was to bring before public discourse independent research findings that corroborated with their scientific approaches.

Morgan states that human beings have gone through three stages in their evolutionary history. He classifies this as savagery, barbarism and civilisation. He argues that the differences between the different stages could be noted with reference to such aspects as gender relations, methods used for procurement of food, weaponry and language, characteristic of each stage. It may be pertinent to note that Rahul Sankrityayan has beautifully depicted this evolutionary history in his famous book, ‘Volga se Ganga’, which reads like a novel. Morgan did not agree with the division of pre-historic period into stone age, bronze age and iron age. At a time when more scientific anthropological and archaeological studies are in progress, the meticulous studies and discoveries made by Morgan with all its limitations need to be recognised.

Morgan’s formal subject of study was law. Ever since he took up the case of the Seneca tribe, he was in the forefront of the struggles for the land rights of the tribal peoples in America. He had the unusual experience of the tribal people acknowledging him as one of their own. He was conferred the membership of the tribe. It was under such circumstances that he decided to study the different marital systems and family relations that existed among different American tribes. A mentally retarded son was born to him out of his wedlock with Mary Elizabeth, who was his blood relation. In his books, Morgan disapproved of marriage between blood relations. It is possible that Morgan’s own experience had influenced his thinking on marriage between blood relations.

By setting up a ‘Pandit Club’ in Rochester in 1852, as a platform for intellectual discussions, Morgan has indirectly brought an Indian identity into his life. The popular Sanskrit expression ‘pandit’ denoting knowledgeable persons was chosen by Morgan to name his club. Every year Morgan used to present one important thesis in the club. Morgan was also associated with various associations for scientific progress. It was his dream to establish a university for women. He made several attempts in that direction. He believed that gender equality was an important component in the march of civilisations. It is quite natural that Morgan stood for gender equality as he had proved with strong evidence that the first familial set up in the history of mankind was matriarchal.  Morgan and Mary set apart a good part of their wealth for the promotion of women’s education in Rochester University.

Morgan associated himself with the metal mining industry in Michigan. He was also elected to New York State Assembly in 1861 as a Republican candidate! Moreover he became the member of Senate representing New York twice. Morgan also expressed his desire to take up the post of the commissioner of the newly established department for the welfare of Red Indians. But Abraham Lincoln, then president of the US, could not oblige him as his campaign manager had promised to give the post to another person. It was clear that Morgan was interested in official postings as is evident from his expression of interest in being appointed as an ambassador. But that desire was also not fulfilled.

He undertook extensive tours in connection with his research during 1859-62.   It was during this time that two of his young children died of influenza, which was a great blow to him. Though he wanted to dedicate his book to his children, who had met with untimely deaths, Smithsonian Institute  which collaborated with him in the publication, did not concede to his  request on the grounds that a scientific work should not give room for  the expression of personal sentiments.

When he visited England along with his family, he found time to visit Charles Darwin who had become famous as the author  of  ‘Origin of the Species’. We can only wish that he had also visited Marx who valued his discoveries most.

Morgan died in 1881, two years before the death of Marx. It was during his busy schedule in connection with the rewriting of the manuscripts of the second and third volumes of ‘Das Kapital’ that Marx prepared extensive notes on Morgan’s book ‘Ancient Society’.