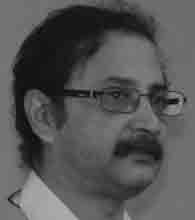 DR Amit Sengupta, a leading figure in the people’s science and public health movements, died in tragic circumstances in Goa on November 28.  Amit Sengupta was the former general secretary of the All India People’s Science Network and convenor of the Jan Swastya Abhiyan (People’s Health Movement).

Amit Sengupta joined the Party in 1979 as a student activist. He played a key role in formulating the Party’s policies on the popular science campaign and on public health. He was the convenor of the All India Popular Science Committee of the Party.

Amit Sengupta was a regular contributor to the ‘Science and Development’ column of People’s Democracy. He had also written extensively on public health and science issues. In his death, the Party and the progressive science movement have suffered a big loss.

The Polit Bureau pays homage to his memory and conveys sincerest condolences to his wife, son and other family members.