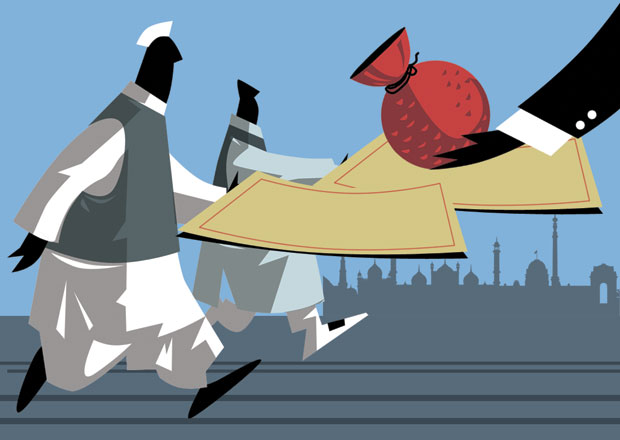 No to Electoral Bonds

The CPI(M) will not accept donations through electoral bonds.

IN the course of the assembly elections now on in five states, the CPI(M) has been offered electoral bonds as donation in one of the states.  The Party has not accepted this offer even though it is in serious need of funds to fight elections.

Why is the CPI(M) rejecting funding through electoral bonds? This requires explanation as the system of electoral bonds introduced by the Modi government is a pernicious one. It will harness corporate funding for the ruling party and facilitate the takeover of the political system by big money.

Last year, the government announced the proposal for electoral bonds in the January 2017-18 budget.  The electoral bond is a bearer bond in the nature of the promisory note.  Selected branches of the State Bank of India are authorised to issue the electoral bonds purchased through a bank account.  The bond is available in multiples of Rs 1,000, Rs 10,000, Rs 1,00,000, Rs 10,00,000 and Rs 1,00,00,000.  The bond would be issued at designated SBI branches during a period of ten days each in the months of January, April, July and October.

The bond has a life of 15 days during which it can be donated to a registered political party which has polled 1 per cent of the vote in the state, or, national election.  The party has to open a bank account in a designated SBI branch.    The party does not have to disclose who it has received the bond from in its account. Neither does the donor entity have to state to which party it has donated.

The system of electoral bonds will only facilitate corporate funding to the ruling party and open the way for legitimising bribery and corruption. Companies will have the incentive to provide huge contributions to the ruling party to earn its favour. Already through the Finance Bill, an amendment was made to the Company Law. The cap on companies giving funds to political parties of 7.5 per cent of the average of net profits earned in the previous three years has been removed. Further, the amendment had done away with the requirement which provides for disclosure of the name of the political party to which the company makes the contribution.

The finance minister had claimed, at the time the electoral bonds were introduced, that this will bring in more transparency and cleanse political funding. Nothing can be more hypocritical and untruthful than this claim. If transparency is the aim, the identity of the donor and that of the recipient party should be publicly known.

The donations made through anonymous bonds will only facilitate and legitimise bribery. Earlier, a company which won a contract would have had to pay a bribe illegally under the table. The electoral bond scheme will make all such kickbacks legal. For instance, if a commission of 10 per cent has to be paid by a company for getting a contract worth Rs 1,000 crore, all it has to do is to provide an electoral bond for the amount of Rs 100 crore to the ruling party. There is no way for the public to know about such a donation, nor can any investigating agency ask questions about it.

The Modi government has found a way to legitimise bribery and kickbacks.  For instance, in the Rafale deal, the Anil Ambani company has been given the offsets contract when it has no legitimate grounds whatsoever for getting the contract.  The quid pro quo for such a deal can now be possibly in the form of electoral bonds to the BJP, with no questions asked whatsoever.

The opaque bond system can be misused for money laundering and black money operations through the use of shell companies.

The other less noticed aspect of the electoral bond scheme is that it opens the way for foreign companies to fund political parties in India without it becoming public. In the Finance Bill of 2016, the government had amended the Foreign Contribution Regulation Act (FCRA) to treat contributions by Indian subsidiaries of foreign companies as funding from Indian sources. With this amendment of the FCRA, foreign corporate funding to political parties was legalised.

It may be recalled that all the amendments made to the Representation of People Act, the Reserve Bank of India Act, the Income Tax Act and so on were smuggled in through the Finance Bill. Since the Finance Bill is a Money Bill, these amendments were thus put outside the purview of scrutiny and voting in the Rajya Sabha.

Instead, the CPI(M) will accept  contributions to the Party in an open fashion.  The existing provisions of law provide for donations of Rs 20,000 and above to be received with the recording of the identity, address and PAN number details of the donor.  The Party will receive contributions in this manner and this will make the identity of the donor public when the statement of accounts of the Party are submitted to the Income Tax Department and the Election Commission.

In the struggle to bring about electoral reforms, the first step should be to scrap the electoral bond system and the amendments which have opened the floodgates for corporate funding and money coming in from foreign entities.  The BJP should not hide behind the cover of electoral bonds and must make public the identity of the donors who have utilised the electoral bond scheme to donate to the BJP.