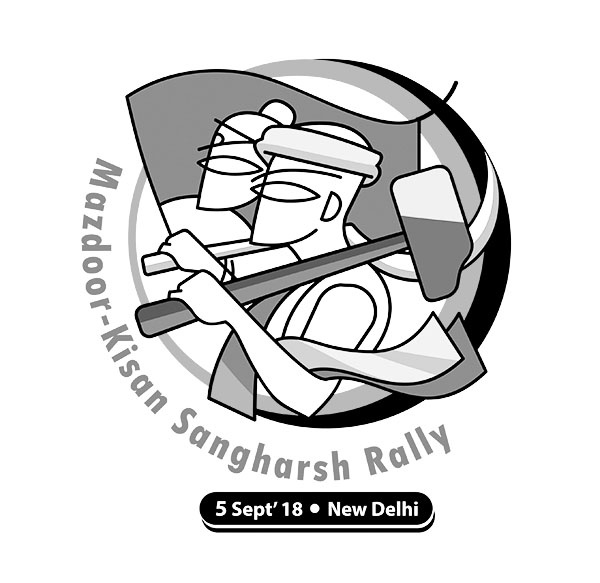 Mazdoor-Kisan March to Parliament on Sept 5

THE Centre of Indian Trade Unions (CITU), All India Kisan Sabha (AIKS) and All India Agricultural Workers’ Union (AIAWU) have decided to conduct a massive ‘March to Parliament’ on September 5, 2018. This will be the first ever such march in the national capital, of the three major sections of the toiling people, who produce the wealth of this country.

Soon after its general council meeting in the last week of March 2018, where the decision for organising such a rally was taken, CITU has started preparations for the campaign and mobilisation. A team was constituted at the CITU centre to work out the concrete details of the campaign as per the direction of the general council, which decided that the campaign should focus on the 12 point charter of demands of the joint trade union movement and the 10 point charter formulated by the CITU secretariat. These encompass all the issues of concern for the toiling people, workers, peasants and agricultural workers, at their work place as well as in their daily lives.

The aim of the campaign is to link up the day-to-day issues of the workers with the policies being adopted by the governments, led by the BJP, Congress and the regional parties leading different state governments and expose the politics that support these policies. It also aims to project pro-worker and pro-people alternatives and mobilise workers and other sections of the toiling people to fight for such alternatives. CITU has also decided to try its best to put into practice in this campaign the slogan it has been giving since its 14th conference: ‘Reach the unreached’.

As per the decision of the CITU general council, state level workshops are being held involving state committee/council members of CITU and the leadership of its state level unions. In addition to planning the campaign, these workshops are also meant to discuss the updated document on organisation adopted in the Kozhikode general council, applying it to the concrete conditions in the state. Workshops have already been completed in around 10 states with others scheduled in June-July. These will be followed by district level workshops and meetings of the lowest level union committees by July end.

CITU centre has decided to prepare campaign material in the form of booklets, pamphlets and sector specific talking points that are to be translated by the state committees into local languages and provided to the cadres. The sector specific talking points are meant to equip the cadres to discuss these issues in the general body meetings of workers at the lowest level. CITU has also decided to use cultural forms in the campaign, particularly in its ‘Samoohik Jagaran’ programme on the night of August 14.

On the whole, this campaign is meant not only to expose the failures of the BJP led Modi government at the centre, but also of the neoliberal policies. It is to create the confidence among the toiling people that by coming together they can defeat these policies and the parties supporting them. It is a part of the effort to unite all sections of toiling people to strengthen the struggle for an alternative.