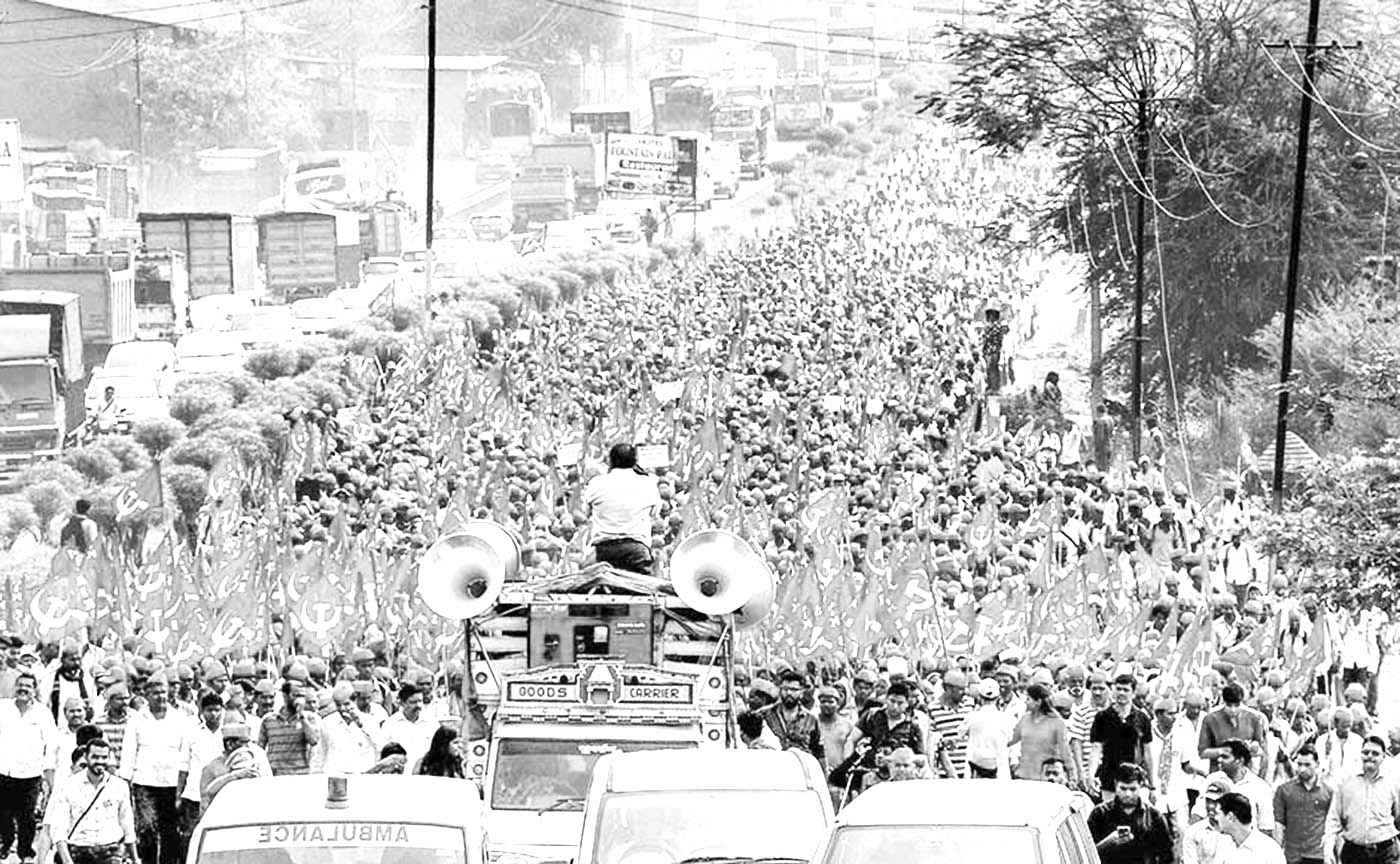 IT was truly an amazing struggle, the like of which has not been seen in Maharashtra in recent times. It caught the imagination of the peasantry and the people, and received their unstinted support, not only in the state but all over the country. It received the backing of parties and organisations all across the political spectrum. For the week from March 6-12 that the long march of nearly 200 km lasted, it became the centre of attraction for the entire national and state media, both print and electronic, and also the social media. #KisanLongMarch was the number one trending All India hashtag the whole day March 12.

Beginning at Nashik with over 25,000 farmers marching in unison, including thousands of peasant women, it concluded in Mumbai with over 50,000 farmers. Red flags of the Kisan Sabha, red banners, red caps and red placards highlighting the main demands of this long march, made it a huge ocean of red. By far the largest mobilisation was that of thousands of adivasi peasants from Nashik district, under the leadership of AIKS former state president J P Gavit, MLA. The next was that from Thane-Palghar district, followed by Ahmednagar district. There was representation from several other districts in the state, which rose markedly in the last two days of the long march.

The long march was the culmination of three years of constant struggles led by the AIKS in Maharashtra, which has been briefly outlined in these columns last week. Meticulous preparations for the long march, including planning its logistics to the last detail were carried out by the AIKS state leadership right from February 16, when the decision was taken at the extended meeting of the AIKS state council at Sangli. Grains, oil and firewood for the food of the participants was collected from the villages themselves. Water tankers for drinking were stationed at various points along the way. An ambulance with a doctors’ team and the necessary medicines was kept along with the Long March.

The way that tens of thousands of poor and landless peasants, along with their leaders, marched with determination 30 to 40 km per day for seven days in the searing heat of the sun, hundreds of them without footwear on tar roads, with bruised and bleeding feet, evoked not only massive public support for their cause, but also massive public anger against the callous and insensitive BJP-led state government.

All this was reflected in the overwhelming response from the working class, the middle class, dalits, Muslims, Sikhs and all other sections in Mumbai and Thane cities. The long march was not only welcomed with open arms in several localities, but the people themselves donated generously in both cash and kind in both these cities. The CITU, AIDWA, DYFI and SFI in Mumbai and Thane-Palghar districts launched a mass campaign amongst the people in support of this long march, but the mass response went far, far beyond that.

The magnificent humanitarian decision of the AIKS of walking day and night on the last day, from 11 am on March 11 to 6 am on March 12, from Thane city to Azad Maidan in the heart of Mumbai city, to avoid disrupting the final board examinations of tens of thousands of SSC students in Mumbai, drew the unstinted admiration of people across the country. Several prominent celebrities in India also expressed their appreciation at this gesture.

General secretary of the Peasants and Workers Party (PWP) Jayant Patil, MLC, and state president of the Janata Dal (Sharad Yadav group), Kapil Patil, MLC, who had helped the Kisan Sabha struggle, were also present during the discussions.

In the light of earlier bitter experiences with the present government, the Kisan Sabha had taken the clear position right in the beginning that it would not withdraw this struggle without official written assurances. These written assurances on all the demands were given within an hour of the conclusion of the talks, with the signature of the chief secretary of the state government. Three ministers of the state government – Chandrakant Patil and Girish Mahajan of the BJP and Eknath Shinde of the Shiv Sena –  came to the victory rally at Azad Maidan and pledged to implement the agreement that had been reached. The Kisan Sabha also insisted that the agreement arrived at should be placed on the table of the House by the chief minister in the state assembly that was then in session. Accordingly, the chief minister tabled that agreement in the House on March 13.

Concrete assurances have been given by the government on AIKS demands concerning the implementation of the Forest Rights Act (FRA), river linking proposal adversely affecting tribals in Nashik, Palghar and Thane districts, loan waiver to farmers, remunerative prices, temple lands, pasture lands, old-age pensions, the public distribution system, compensation to lakhs of farmers in the Vidarbha and Marathwada regions who have suffered huge losses of the cotton crop due to pink bollworm pest attacks, hailstorms and on other issues. The details of the demands conceded will be given in these columns next week.

All the farmers left Mumbai on the night of March 12, with tremendous confidence generated by this victory, buttressed equally with deep gratitude towards the people of the state and the country who had supported them to the hilt in this struggle. The massive nationwide public response to this long march was an acknowledgement of the valiant, peaceful and democratic struggle waged by the peasants under kisan leadership. It was also a reflection of the fact that their demands of land rights, loan waiver, remunerative prices and pension, which were essentially directed against the neo-liberal policies of the BJP-led governments in the state and the centre, were actually the demands of the peasantry of India as a whole.

One battle has been won, but the war still remains. And after the victory in this battle, it shall be fought with even greater grit and determination all over the country!