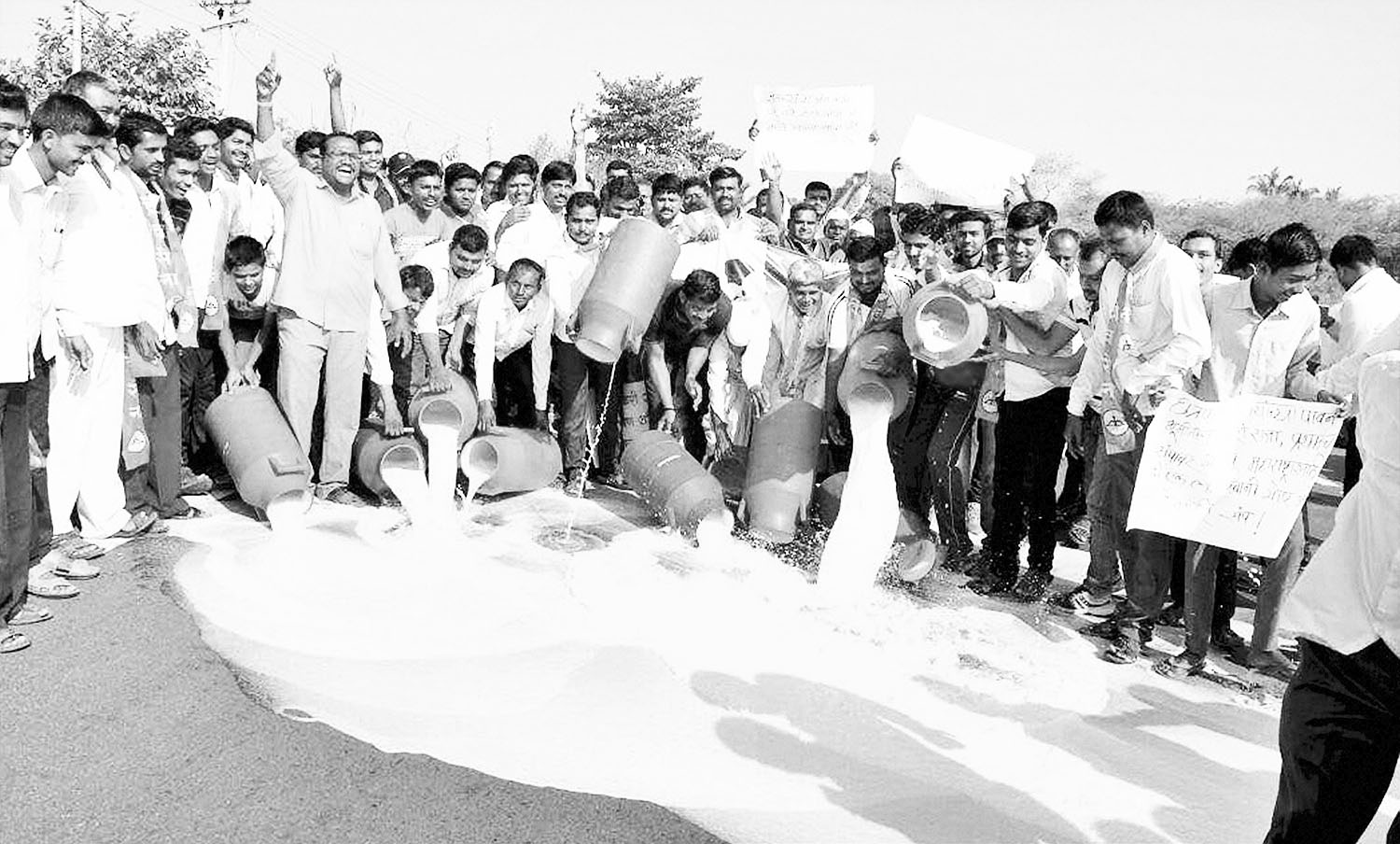 JUNE 5, 2017 was a red letter day in the history of Maharashtra. On that day, practically the whole of rural and semi-urban Maharashtra came to a halt as part of a Maharashtra Bandh to support the historic statewide farmers’ strike that began on June 1. The call had been given jointly by several peasant organisations, among whom the AIKS is playing a major role.

Hundreds of towns, mandis, roads, shops and government offices were closed down by lakhs of farmers who came on to the streets in solidarity with the demands of the strike. In several places, effigies of the BJP state government were burnt. There were police lathi charges in several places in which innumerable peasants were injured. One of them died while running to escape from the police repression. There were hundreds of arrests.

The strike and the Bandh reflected the long pent-up anger of the peasantry at always being given a raw deal by the powers that be. The rage against the government was palpable everywhere. Maharashtra had never seen such a novel phenomenon of peasant protest. The strike has entered its successful seventh day at the time of filing this report on June 7.

The unprecedented peasant strike, with farmers refusing to get their produce like milk, vegetables and fruits to the market, has been intensifying with every passing day. The two cardinal demands of the strike are peasant loan waiver and implementation of the recommendations of the National Commission on Farmers (NCF) that was headed by Dr M S Swaminathan, particularly the one about setting the minimum support price (MSP) for all crops to cover the cost of production plus fifty per cent profit.

Other demands include increase in the price of milk paid to the farmer; pension to peasants and agricultural workers above the age of 60 years; waiving of arrears of electricity bills; and increased irrigation facilities. Some other demands that have been raised are to stop the conspiracy of snatching farmers’ lands in the name of the Mumbai-Nagpur Samruddhi Highway and the Delhi-Mumbai Industrial Corridor; scrapping of the pro-corporate Pradhan Mantri Fasal Bima Yojana and providing comprehensive insurance security to all farmers.

The spontaneous response of the peasantry of Maharashtra to the strike was not without reason. Of the four lakh suicides of debt-ridden peasants that have taken place in India during the last 25 years of neo-liberal policies, Maharashtra has the dubious distinction of topping the list of states, with nearly 75,000 farmers having committed suicide. Vidarbha region has the largest number of peasant suicides, followed by the Marathwada region. 12,602 farmers committed suicide in India in the year 2015. Compared to 2014, this is a massive 42 per cent increase. Maharashtra had 4,291 farmer suicides in 2015. The situation has aggravated markedly with the ascent of the BJP-led Modi regime three years ago.

The peasant strike boiled over with anger on June 3 with the shameful act of its betrayal by two blacklegs who were masquerading as peasant leaders. It has now come to light that both these self-styled leaders – Jayaji Suryavanshi and Sandip Gidde – have old RSS connections. They met the Maharashtra chief minister Devendra Fadnavis in a delegation in the wee hours of June 3. In spite of the CM not concretely conceding even a single demand of the fighting peasants after a three hour discussion, they unilaterally declared a withdrawal of the strike at dawn without consulting any of the peasant organisations who were actively supporting the strike. It became crystal clear that both the RSS-BJP state government and these blacklegs had connived to undermine this historic peasant struggle.

But to their utter misfortune, the general secretary of the Maharashtra Rajya Kisan Sabha (AIKS), Dr Ajit Nawale was also a part of the delegation that met the CM. He was the only one of the 17-member delegation who hotly argued that none of the vital demands of the strike, like loan waiver and remunerative prices were agreed to by the CM and hence the strike must on no account be withdrawn. The CM, during the discussions, went to the extent of branding him as a ‘disruptive Communist’ and the two blacklegs declared that ‘he was not a member of the core committee, and hence need not be taken seriously.’

Dr Ajit Nawale then consulted AIKS national joint secretary Dr Ashok Dhawale on phone at 3.45 am on June 3. Both decided that he should walk out of the talks with the CM in protest and should immediately report the full details of the connived betrayal to the media that was waiting outside the CM’s bungalow. This was flashed all over the state by the electronic media and it led to a massive uproar amongst the peasantry all over the state against both the chief minister and these blacklegs. Both these AIKS leaders immediately contacted leaders of the other peasant organisations who were against this sell-out and it was jointly decided by all of them to give the Maharashtra Bandh call for June 5.

On June 2, before all these events, CPI(M) general secretary Sitaram Yechury had addressed a jam-packed press meet in Mumbai where he fully supported the peasant strike. On June 3 again, Dr Ashok Dhawale, Dr Ajit Nawale, AIKS state president Kisan Gujar and state working president Arjun Adey addressed another jam-packed press meet in Mumbai organised by the AIKS. They thoroughly exposed this betrayal and called for intensification of the strike.

On June 4, a meeting of peasant organisations was held at Nashik, where the old core committee that held discussions with the CM was declared as dissolved and a new 21-member coordination committee comprising leaders of various peasant organisations was formed to lead the strike. As per the call of this committee, on June 6, the day after the Maharashtra Bandh, tens of thousands of peasants closed down the tehsil offices in the state, putting padlocks on many of them. On June 7, the peasants will picket the houses of MLAs and MPs throughout Maharashtra. On June 8, a meeting followed by a peasant convention will be held in Nashik to decide the future course of this struggle.

The ongoing peasant struggle has already taken a toll of the unity of the ruling alliance in the state. Two major political parties, the Shiv Sena and the Swabhimani Party led by peasant leader Raju Shetty, a Lok Sabha MP, are openly supporting the peasant strike and are vehemently criticising the BJP and the chief minister. Sadabhau Khot of the Swabhimani Party, who is the minister of state for agriculture in the state government, was also involved in the talks in the CM’s house on June 3. He is also being roundly criticised and deep differences have developed between him and his leader Raju Shetty. Due to the inexorable sweep of the peasant strike, the Congress, NCP and others have declared support to it.

ROLE OF THE LEFT

All Left parties – CPI(M), CPI, PWP – have been actively supporting the peasant strike from the beginning. Trade unions like CITU and AITUC, organisations like AIAWU, AIDWA, DYFI and SFI have also extended active support. The CITU has held demonstrations and marches in several places to support the peasant strike as part of its call for worker-peasant unity. AIKS units throughout Maharashtra are, of course, in the thick of the struggle.

The consistent AIKS struggles in Maharashtra over the last one and a half years have, in fact, helped to popularise the issues and the demands of the present struggle. The massive one lakh strong AIKS sit-in satyagraha at Nashik in March 2016; the militant struggle on the issue of drought at the Aurangabad Divisional Commissioner’s office in the Marathwada region in May 2016; the impressive coffin rally to the Thane district collector’s office to mark the AIKS state conference in June 2016; and the 50,000 strong siege of the tribal development minister’s house at Wada in Palghar district in October 2016, which yielded concrete gains for the adivasi peasantry; and the ‘Aasood’ (whipcord) State Convention followed by the ‘Aasood’ state rally to the house of the state agriculture minister at Khamgaon in Buldana district of Vidarbha region last month on May 11, 2017 – it is this series of struggles led by the AIKS that have put the organisation for the first time in the mainstream of the current peasant struggle in Maharashtra.