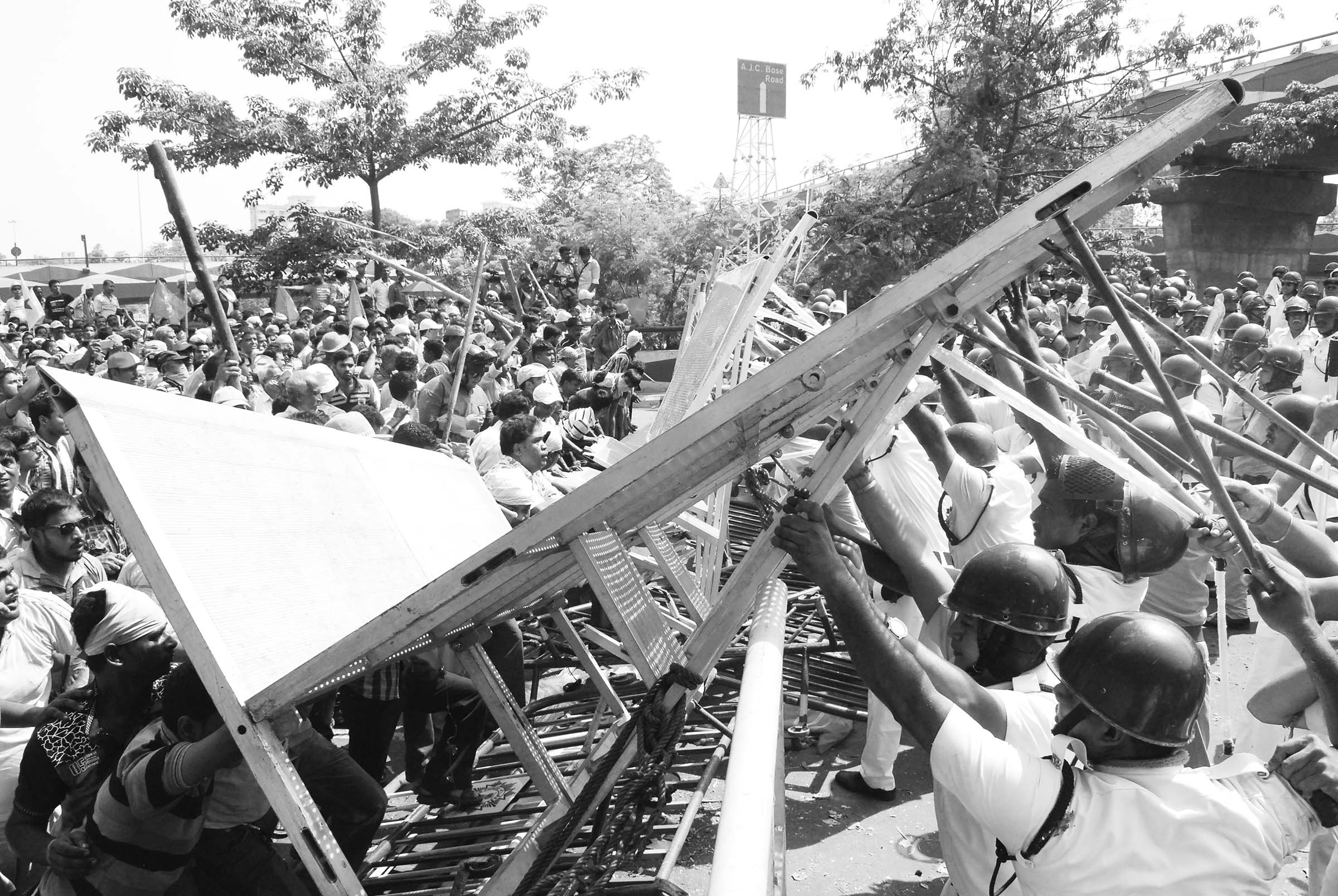 MARCH TO NABANNA IN WEST BENGAL: Brutality, Challenged by Courage of the People

From our special correspondent

NEARLY one thousand people suffered injuries, scores of them severely in brutal police attack on the Left activists in West Bengal on May 22. But the real headline of the bloodied day was the determined fight of people against an authoritarian government. The twin cities of Kolkata and Howrah reverberated with the struggling ethos of the people.

Left peasants and agricultural organisations took the initiative for a march to Nabanna, the state secretariat on burning issues of the people, particularly of rural people. Other Left mass organisations supported the call and the Left Front called upon the people to join in numbers. Intensive campaign was organised for nearly two months in all districts of the state. Hundreds of local level meetings, village meetings, campaigns using unique methods were conducted.

The main charter of demands has 18 points. It contained major demands of the peasantry like mouza based crop insurance, remunerative prices, payment of MNREGA, and minimum wages for tea plantation workers and workers of other sectors. District and local level demands were included during the campaign.

The march was scheduled to be conducted on both sides of the Ganges. Five places were declared as starting points of the march, three in Kolkata and two in Howrah. The chief minister suddenly arranged an administrative meeting in Bolpur in Birbhum district on the day of the march making it clear that she has already become paranoid of such an action by the Left. The police preparation to tackle the march was extra ordinary to say the least. Steel barricades, water cannons, armoured vehicles and special forces were mobilised along with thousands of policemen. The state administration blocked all roads to Nabanna and declared it unreachable.

But even before the march started, the state administration was taken aback by the demonstration in front of Nabanna by MLAs. Left Front MLAs like Ashok Bhattacharya, Manas  Mukherjee, Anisur Rahaman, Tanmoy Bhattacharya and others under the leadership of Sujan Chakraborty reached North gate of Nabanna around 12.30 pm. 24 Left MLAs were detained by the police.

It was an extremely hot day. But tens of thousands of people from the entire state assembled in those five places. Kolkata and Howrah became practically blocked by human waves with red flags. Left leadership, including Surjyakanta Misra, while addressing the gathering before the march repeatedly asserted that this is not a march to ‘capture’ Nabanna, but a peaceful protest to submit demands to the government.

The state administration had other plans. As soon as the march reached in front of barricades in three places of Kolkata, police lobbed tear gas shells and started baton charging. Hundreds of people were injured within few minutes in Esplanade and Khidderpore areas. The downtown of Kolkata became a battlefield with unarmed Left activists resisting police attack. Police was merciless in beating up elderly, women protestors. Even injured were not spared. In Howrah too, police took the offensive and brutally beat up people after failing to disperse them using water cannons. For more than two hours, the Left activists regrouped and marched forward braving police attack. A large contingent of police cruelly baton charged the sit-in site where Biman Basu, Misra and other leaders were talking with media. Opposition leader of the state, Abdul Mannan came to meet the Left leaders but even he was not spared. Media persons also faced the wrath of police and many of them were mercilessly beaten.

Gory scenes were aplenty. Many protestors were bleeding profusely, many of them suffered serious eye injuries, women were lying in the street with pain. It was alleged that chemical spray was used along with tear gas. 450 protestors were taken into hospital or nursing homes in Kolkata and Howrah. Police ransacked medical camps at protest sites.

Surjyakanta Misra alleged that the police brutality was ordered by the chief minister herself. She has become panicky and afraid to face the people. It was reflected in the recently concluded municipal polls where unbridled rigging was done. This was once again proved by the actions of the administration in tackling a peaceful democratic movement.

The entire state arose in protest. On the next day, rallies and protest demonstrations took place throughout the state. In Kolkata, a large procession marched from Lenin statue, condemning the attack. Opposition legislators strongly protested within the assembly.

The march to Nabanna took place in the background of attempts of communal polarisation in the state and political polarisation between the TMC and BJP. The indomitable spirit of the Left movement asserted once again to carry on the fight against injustice and restoration of democracy.