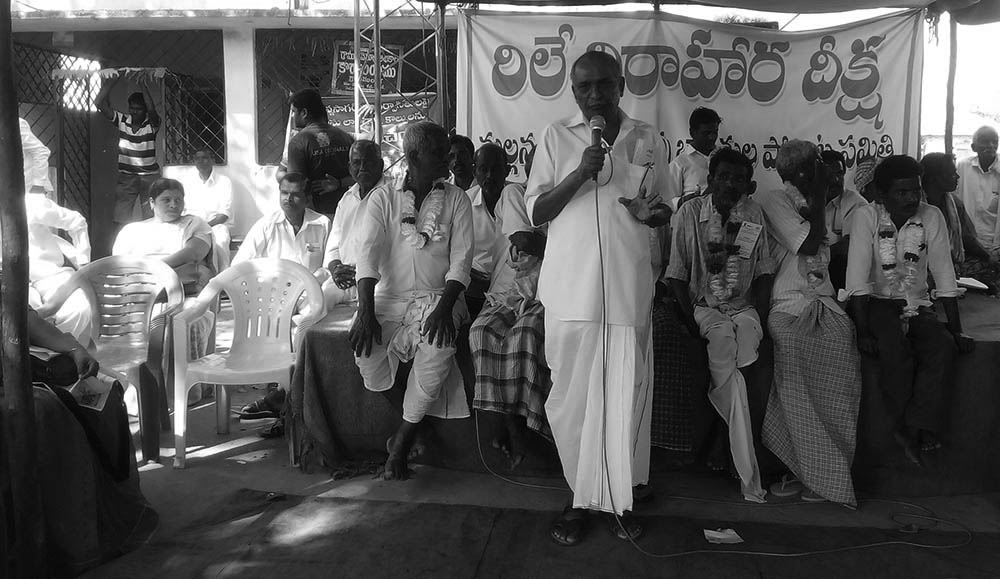 Relay hunger strike launched by the farmers and other people affected under the proposed Mallannasagar reservoir at Vemulaghat village in Toguta Mandal of Siddipet district reached its 250th day on the February 9. This determined struggle of the people affected under the Mallannasagar reservoir, which is a part of larger Kaleswaram project with a storage capacity of 50 tmc ft water going on near the farm house of chief minister K Chandrasekhar Rao, has been supported by the CPI(M), several other political parties and mass organisations. Leaders of political parties and mass organisations visited the camp of relay hunger strike, extended their support, complimented the people agitating for protecting their rights and livelihood, terming it as a source of inspiration for similar struggles of land oustees elsewhere in the state, and exhorted them to continue their struggle till they achieve their objective.

Speaking on the occasion, Justice B Chandra Kumar, retired judge of the High Court of both the Telugu states, made it clear that the Land Acquisition Act, 2016 enacted by the TRS government, even if it gets assent of the president of India, would not stand judicial scrutiny and that the enactment can be challenged in the Supreme Court. The government got this law enacted, in the background of setting aside its GO 123, intended for acquisition of land, contravening the central act and affecting rights of displaced people, by the High Court. By taking up such unviable and unwarranted projects, Chandrasekhar Rao has been clamouring for benefiting contractors and real estate developers, and in the process making somersaults for forcible acquisition of lands by issuing different untenable GOs and bringing about the latest enactment, Justice Chandra Kumar charged.

Sarampally Malla Reddy, vice president of All India Kisan Sabha, said, while KCR has been boasting of golden Telangana, in every district, struggles of different sections of people have been going on.  Drawing inspiration from the Mallannasagar struggle, people affected under forcible acquisition of land undertaken by the government in the name of Malkapur project in Warangal district also started agitation against the conspiratorial moves of the government affecting their rights. Reminding the government that, in the face of determined struggles of farmers and agricultural workers, the earlier GOs issued for acquisition of lands had become infructuous, Malla Reddy demanded the government to invite the land oustees for talks.

B Venkat, a member of the Telangana state secretariat of the CPI(M), pointed out that unable to digest the struggle of the CPI(M) in support of the oustees under Mallannasagar reservoir from the beginning, the CM has been making intolerant and unwarranted statements belittling and denigrating the Party.  Conveying compliments from Tamminenni Veerabhadram, state secretary of the CPI(M), from Mahajana Padayatra, to the people agitating against the moves of the government for acquisition of land under Mallannasagar reservoir, Venkat reassured the people of Vemulaghat that the CPI(M) would stand by them in their struggle till the end. P Janga Reddy, president of Telangana Rythu Sangham, expressed concern that the KCR government has been trying to implement a draconian model of land acquisition in the case of Mallannasagar reservoir much to the detriment of ordinary farmers and agricultural workers and for the undue benefit of corporate houses. Leaders of various political parties and mass organisations T Jayaprakash Reddy (Congress), O Pratap Reddy (TDP), Pasya Padma (Telangana Rythu Sangham), R Chandra Sekhar (All India Khet Mazdoor Union), K G Rammohan (New Democracy), N Krishna (Telangana Praja Front) and others participated in the programme.