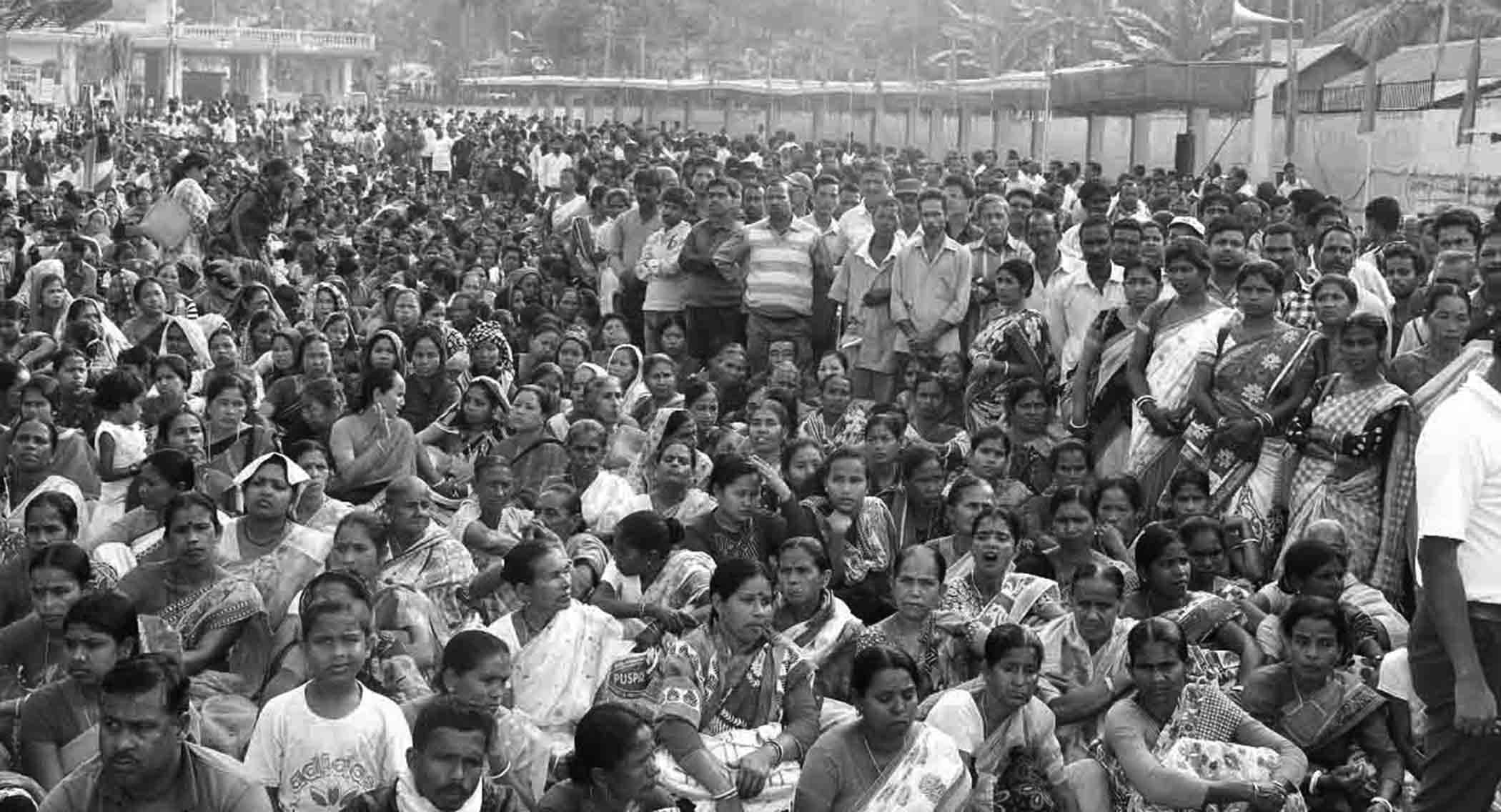 The enemies of unity, peace and development have again started using their fangs to create fissures among the people, disturb the peaceful atmosphere prevailing here, and sabotage the ongoing innumerable developmental activities throughout the state. The situation demands that these elements be thoroughly exposed and totally alienated politically, ideologically and organisationally, said Manik Sarkar, Polit Bureau member of the CPI(M) and chief minister of the state, at Ambassa on February 12, 2016.

On the occasion of the open session of the CITU 14th state conference, Manik Sarkar was addressing a massive rally at Ambassa, in Dhalai district. Dhalai district that encompasses large terrains of Atharamura and Longthorai hills, was under severe attack in the past by the outlawed armed secessionist insurgents. It is as a result of so many sacrifices and many people becoming martyrs that the secessionist forces were successfully pushed away and the red flag was kept flying high. Thus Ambassa witnessed a huge congregation of four streams of red processions from different directions of the hilltops as well as flowing from the plains. The processions were named after the departed trade union leaders Comrade Chitta Chanda, Comrade Shakti Prasanna Bhattacharjee, Comrade Bibhu Roy and Comrade Narayan Chowdhury.

Referring to the recent 12-hour bandh on February 8, called by the Forum of three tribal based parties in the ADC areas protesting against BJP government’s Citizenship Amendment Bill which allows provision of Indian citizenship to the migrated Hindus coming from Bangladesh, Pakistan and Afganistan, Manik Sarkar said, this proposal was mooted solely from BJP’s communal point of view, and is unsustainable for a secular country like ours. CPI(M) and the Left parties have strongly opposed this amendment on the floor of the parliament. This bill if passed and implemented, would be a serious concern not only for the ADC areas of the state alone, it would be a concern for the whole country, and especially for eastern states including north-east. Ironically, the workers of this Forum unleashed violent attacks on the CPI(M) offices and workers in several parts of the state but did not utter a single word against the BJP that proposed this amendment in order to implement their Hindutva agenda. Rather, both BJP and the Forum announced that their immediate objective is to unite all anti-Left forces to dislodge the Left Front government. Here lies the reality behind this bandh call, Manik Sarkar said.

BJP-led Modi government’s anti-people policies and measures such as price hike, demonetisation, drive for digitisation, curtailing allocations for MNREGA and social welfare sector, holding up funds in several projects and pursuance of neo-liberal policies have caused serious hardships in the lives and livelihood of workers and peasants. The affects of such measures are not confined only to the people of ADC areas, but affect the whole country. Except Left, no party takes these issues for protest, Manik Sarkar asserted

Describing the battle of the Left Front government to implement alternative pro-people policies to that of the centre, amidst facing financial crunch and non-cooperation of the centre, Manik Sarkar underscored that the Left Front government survives on the very base of tribal-non tribal unity. The opposition parties in league with parochial forces like the BJP, RSS and its affiliate Banabasi Kalyan Samity etc, have targeted to hit this unity through spreading venomous communal hatred. The slogans of “Independent Tripura” and “Deportation of foreigners’ etc, have not worked. Hence they have raised a new demand for a separate state affecting the ADC areas which is tantamount to the former demands. They have been doing this from the very beginning of the formation of Left Front government in 1978 and are continuing even today. They are conspiring to stall all developmental work in the state. The working people must remain awakened and alert against any such attempt to break the unity of the people by these elements in the coming days, Manik Sarkar alerted the masses.

CITU all India general secretary Tapan Sen severely criticised the central government for handing out concessions of about Rs 20,000 crores to the capitalists on one hand and taxing the common working class people to the extent of more than Rs 75,000 crores. Terming demonetisation as an act of utter disruption in the currency management which hit the country’s economy most, Tapan Sen said, this was a well thought-out drive of Prime Minister Narendra Modi to whiten the black money accumulated by the capitalists. Falling down of industrial output has resulted in the rise of unemployment on an unusual scale. Failing to show any positive outcome of demonetisation, Modi is now advocating for digital economy which is absurd in the present conditions of the country, Tapan Sen informed.

Dipak Dasgupta vividly narrated the unprecedented attacks on the working class movement unleashed by the TMC-led government in West Bengal. All democratic rights, trade union rights, right to express and even other fundamental rights are being strangulated there. The police are being nakedly used as their party cadres to suppress the working class movement. In spite of this, Dasgupta informed, the fighting people of West Bengal are trying to rise in the resistance movements. In spite of such an odd situation, CITU has increased its membership in the state, he informed. Appreciating the measures taken by the Left front government in favour of poor working class masses, with its limitations, Dasgupta said, Tripura is now an inspiration before the people who are fighting neo-liberalism all over the country. You must protect your fortress from all odds for the cause of advancing this struggle in future, Dasgupta appealed.

The state CITU president and power minister Manik Dey explained the pro-workers measures implemented by the Left front government in the state. CITU state secretary Sankar Datta explained how central policies are adversely affecting the lives and livelihood of the working people including the peasantry in the state and stressed for further strengthening of the organisation in the future.