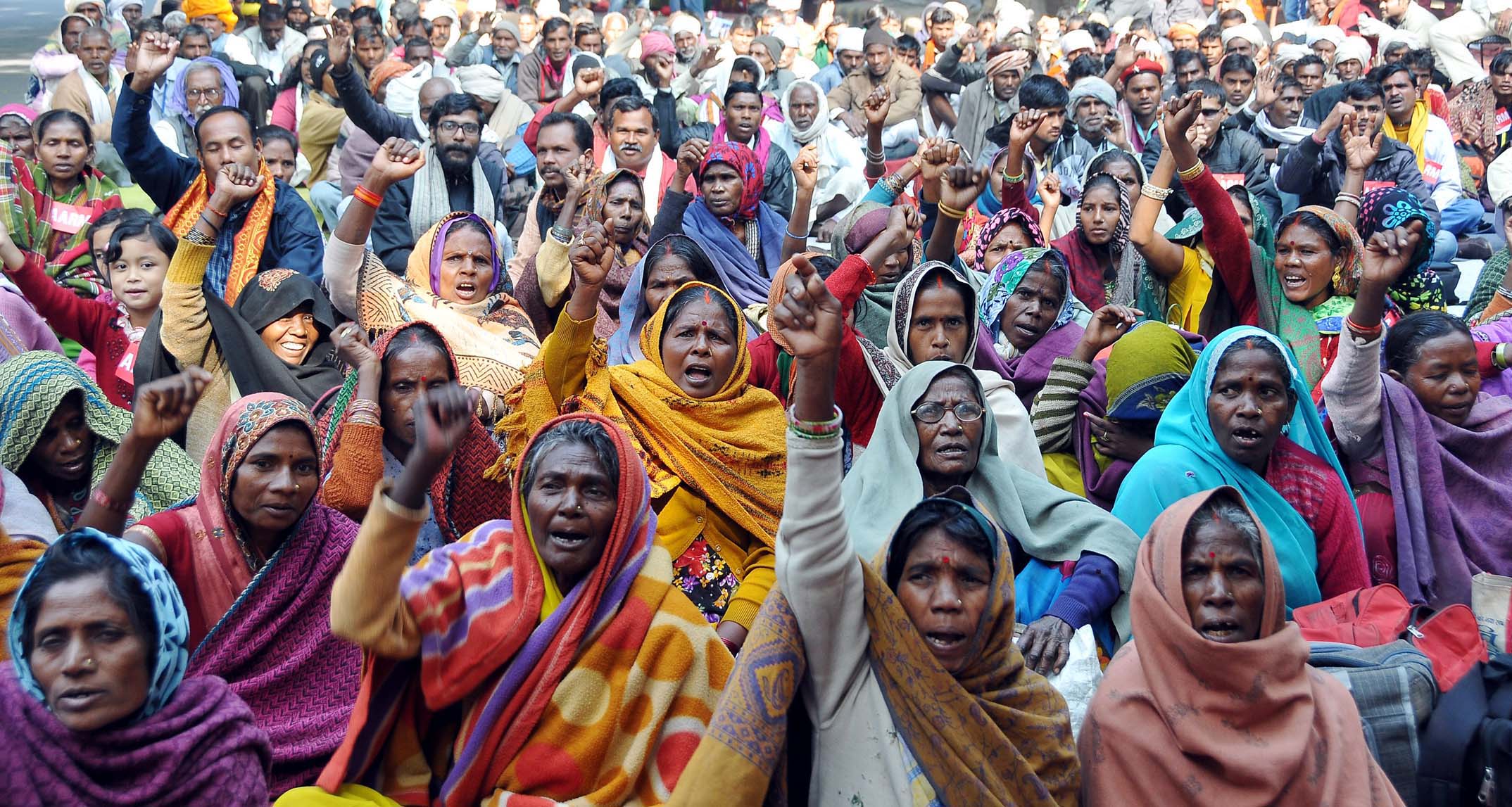 TEN years ago in December 2006, the historic “Scheduled Tribes and Other Traditional Forest Dwellers (Recognition of Forest Rights Act) (FRA) was adopted by parliament. Its conception and passage was the result of the decades of struggles and sacrifices of millions of tribals across India, of their organisations, of numerous activists and intellectuals working on tribal issues and because of the commitment and efforts of the Left parties.

There were three representatives of the CPI(M) (Bajuban Riyan, Dr Babu Rao and myself) and one of the CPI (late Com C K Chandrappan) in the select committee of parliament chaired by Kishore Chandra Deo of the Congress party. The select committee through its interventions had transformed a weak and inadequate draft into a strong instrument for justice with most of the detailed recommendations made by the CPI(M) being included in the final report. But this was not liked by a combination of powerful lobbies. A century ago colonial chicanery had turned tribal owners of the forests and its resources into encroachers. The Indian inheritors of the colonial mindset were no less active in sabotaging the bill.

The real encroachers and plunderers of the forests, the mining companies, the private power sector companies, those involved in irrigation projects, the timber and paper industries, the forest resort tourist industry had high stakes in preventing the passage of the bill. They were in the company of fundamentalist wild life and environmentalist groups with their close links with the powerful forest bureaucracy. They made a motley though influential crowd and had the ear of very important people in the UPA hierarchy. For one full year they stopped the listing of the bill in parliament. It was only because of the persistent efforts of the Left parties and the struggles inside and outside parliament which forced the government to finally bring the bill to parliament.

The Act was adopted in spite of efforts by the BJP to sabotage it through a highly communally motivated and fraudulent campaign among the north-east MPs that the passage of the Act would legalise the occupation of “illegal Bangladeshi migrants.” At the last minute the government smuggled in the highly unjust clause for non-tribal traditional forest dwellers requiring to show evidence of occupation for the last 75 years. The Left had strongly protested holding that the 1980 cut-off date suggested by the Supreme Court would be appropriate. But that clause still remains, denying thousands of poor forest dwellers, a large number of them SCs from their right to forest land pattas.

There was another phase of struggle during the formulation of the Rules in which once again the representatives of the Left played an important role in ensuring that some of the deliberate omissions made in the Act were covered in the Rules. This included the importance given to the gram sabha in the implementation of the Act and in particular in the identification of community rights over forest resources.

From the beginning it was clear that the Act had the potential of acting as a break to the reckless handing over of natural resources, in the case of forest land, particularly mineral resources, to corporate mining companies and contractors both foreign and desi. Therefore to get the Act implemented was itself a big struggle. The lack of political will was obvious. In particular the retired forest bureaucracy acted as a front for the many interests which were negatively affected by the legislation. Multiple petitions were filed in various courts. A stay was put on the implementation of the Act in Tamil Nadu which was lifted hardly a year ago.

Under the UPA -2 government many efforts were made to dilute the implementation of the Act. The rate of arbitrary rejections of claims was high and in particular the registration of community rights had a very poor registration.

Under the Modi government the offensive against the Act has increased manifold which it is doing in several ways.

Firstly it has brought a series of legislations that undermine the rights and protections given to tribals in the FRA, including the condition of “free informed consent" from gram sabhas for any government plans to remove tribals from the forests and for the resettlement or rehabilitation package. The laws were pushed through by the Modi government without any consultation with tribal communities. They include the amendments to the Mines and Minerals Regulation Act, the Compensatory Afforestation Act and a host of amendments to the Rules to the FRA which undermine it. The requirement of public hearings and gram sabha consent has been done away with for middle sized coal mines.  BJP state governments and partners in the NDA like the TDP government in Andhra Pradesh have introduced GOs to subvert the FRA. In Telangana, in total violation of the FRA, the government has illegalised traditional methods of forest land cultivation. In over 1300 traditional cultivation centres, tribals are being harassed, seedlings destroyed by government officials and protesters are being thrown into jail. The BJP government in Jharkhand has brought amendments to the Chotanagpur and also the Santhal Parganas Tenancy Acts which eliminate rights of gram sabhas and permit tribal land to be taken over by corporates, real estate, private educational and medical institutions in the name of development, without tribal consent. In Maharashtra, the government has issued a notification of "Village Rules" which give all rights of “forest management” to government promoted committees as opposed to the gram sabha. This is the law based offensive.

Secondly, there is the policy based war. The Modi government has declared its commitment to ensuring "ease of business" which translates into clearing all private sector sponsored projects in tribal inhabited forest areas. The Wild Life Board with the prime minister as chairperson was reconstituted slashing the number of independent experts from 15 members to three, packing it with subservient officials. In the first three months of assuming office the Modi government cleared 33 out of 41 proposals diverting over 7000 hectares of forest land. Of this the major share was for Gujarat companies. In two years the clearances for projects have included the "diversion" or more appropriately land grab to a much greater extent. In many areas this will lead to massive displacement of tribal communities. In the multi-purpose Polavaram project in Andhra Pradesh alone, now given a national status by the Modi government, two lakh hectares of forest land will be submerged affecting around 85,000 families, of which more than half are tribals, including 100 habitations of particularly vulnerable tribal communities. In almost all these projects, the affected tribal families have not yet received their pattas, one of the conditions set by the FRA. This willful disregard and blatant violation of the legal protections given to tribals has become the cornerstone of the policy.

Thirdly, there is the deliberate freeze of the actual implementation of the FRA. Neither individual pattas nor pattas for community forest resources are being given. During the UPA-2 government, the implementation of the Act was virtually highjacked by the ministry of environments and forests and rejections of claims increased. At present around 61 percent of individual claims and around 63 percent of community forest resources claims have been rejected. However now the situation has worsened and the rate of rejections has gone up during the Modi regime. According to one analysis, between May 2015 and April 2016, eight out of ten claims were rejected. This is the Gujarat model in operation. Gujarat has one of the worst records in implementation of the FRA. Although 98 percent of the approximately 1.9 lakh tribal claims had been approved by the gram sabhas, the bureaucrats in the sub divisional committee and above, brought the acceptance down to just 38 percent. This is in sharp contrast to a Left led state like Tripura, where 98 percent of tribal claims have been recorded and titles given.

The judiciary has also had a role to play. The same institution which gave tribals hope through the Samta judgement, the historic Niyamgiri judgement, has also clubbed together a number of petitions hostile to the FRA and is giving them a sympathetic hearing. In January last year the court in an ominous intervention in the writ petition filed by Wild Life Trust of India and others issued notice to all state governments to "file an affidavit giving data regarding the number of claims rejected within the territory of the state and the extent of land over which such claims were made and rejected and the consequent action taken up by the state after rejection of the claims."

This has rightly been taken by tribal communities and their organisations as a prelude to mass evictions. Maharashtra issued a notification dated April 23, 2015, directing the police to take action against "identified encroachers" namely those whose claims have been rejected. Till 1985, the department of "tribal affairs" was under the home ministry. Tribal rights and struggles for justice were viewed as a "law and order issue, always a problem." Under the present dispensation this retrograde approach seems to have been resurrected.

On the tenth anniversary of the historic passage of the FRA, tribal resistance is growing all over the country to defend their rights under FRA and other related issues.