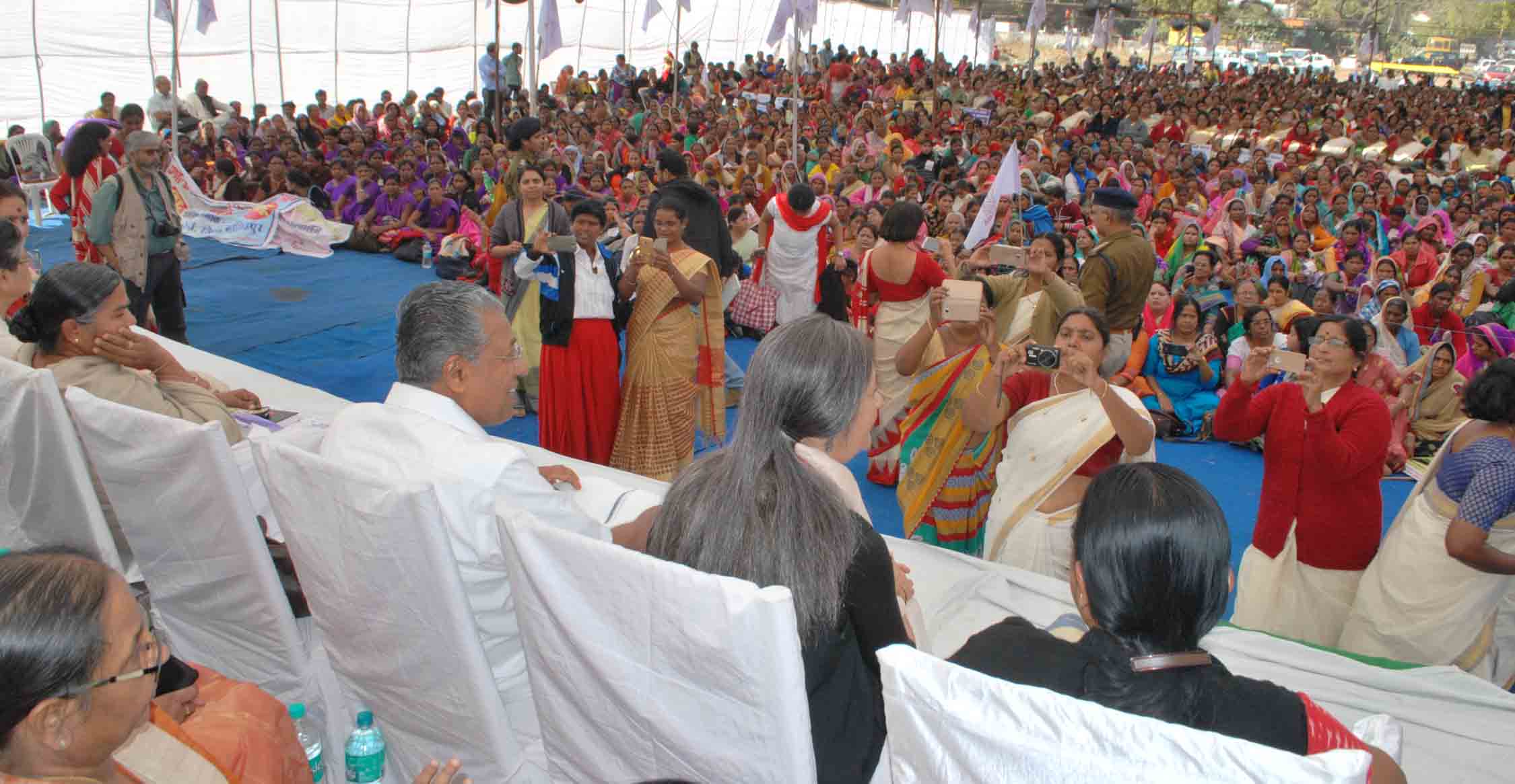 Eleventh All India Conference of AIDWA

THIS was the slogan of the five day 11th national conference of the All India Democratic Women’s Association (AIDWA) which concluded in Shyamali Gupta Nagar (Oriental College), Bhopal on December 14, 2016. The conference was attended by 788 delegates from 23 states. It was preceded by relay jathas from different parts of the country, all of which culminated in Bhopal on December 10, 2016. This marked the beginning of intensive deliberations on the present status and the future of the struggles that they were undertaking against the present neo-liberal and communal regime.

The conference began with a public meeting on December 10, 2016 near the Dussehara Maidan. More than a thousand delegates from twenty states shouted slogans to welcome the Kerala chief minister, Pinarayi Vijayan who was the main speaker in the public meeting. Malini Bhattacharya, president of AIDWA presided over the meeting which was attended by Jagmati Sangwan, Subhashini Ali, Brinda Karat and other national level leaders of the organisation. The delegates were welcomed by Sandhya Shaily and Neena Sharma of Madhya Pradesh Janwadi Mahila Samiti. Radhika Vemula, mother of Rohith Vemula also addressed the meeting.

Speaking at the meeting, Vijayan congratulated AIDWA for the seminal work it has been doing on issues with respect to women’s rights and violence, particularly with respect to honour killings, dalit rights and the livelihood issues of women. Vijayan said that the BJP government has been in power for two and a half years and its leader Narendra Modi is continuously saying that he is very pro-women. But the reality on the ground shows that day by day changes are being brought about to attack the rights of women. In particular, increasing communal attacks and moral policing has targeted women, especially from dalit and miniority communities. The central governments and states led by BJP governments have given freedom to the Sangh Parivar organisations to spread communal hatred and increasing instances of communal targeting have become common. The BJP governments of Rajasthan and Haryana have passed unconstitutional ordinances regarding the representation of women in panchayats and have made about 80 percent of the women ineligible to fight elections. The AIDWA fought this in the courts. The central government too, is refusing to table the women’s reservation bill. In addition, the latest attack is the demonetisation drive of the government. This measure will especially hit women and their livelihoods. It was no coincidence that the first casualty of the demonetisation drive was a poor woman who died in a line at the ATM.  He also mentioned the case of the Vyapam Scam in Madhya Pradesh which showed that BJP was not interested in fighting corruption but protecting the corrupt. Vijayan outlined the cases of fake encounters and violation of civil liberties in Madhya Pradesh. Lastly, he contrasted the misrule of the BJP governments with the rule of the Left Front government in Kerala. He said that numerous measures had been taken for the safety and livelihood security of women in the state.

Addressing the delegates, Radhika Vemula outlined her struggle for justice and said that the cause of the dalits and working classes was the same. She hoped that the conference would build on the emerging alliance between dalits and the other democratic forces. Jagmati Sangwan also exhorted the delegates to continue the struggles started by them. Thereafter Subhashini Ali addressed the meeting and spoke about the mismanagement of the Madhya Pradesh government. She termed the chief minister as “Kans and ‘Sakuni’ Mama” whose policies would be opposed tooth and nail by the women of the state. The meeting came to an end with Malini Bhattacharya, president AIDWA, wishing the delegates and hoping that the AIDWA conference would be successful in planning the tasks required for fighting the present government and its draconian policies.

The second day of the conference started with loud slogans and cheering when Malini Bhattacharya hoisted the AIDWA flag at Shyamali Gupta Nagar (Oriental College), Bhopal. Thereafter the open session of the inaugural session started. The presidium, including the office bearers of the organisation, took their positions and the president invited the chief guests Mukta Dhabolkar (Maharashtra Andhashraddha Nirmulan Samiti) and Radhika Vemula on the dias.  Brinda Karat, the patron of the organisation was the key note speaker. The conference was also addressed by Rajesh Joshi, poet and chairperson of the reception committee for the 11th conference.

Mukta Dhabolkar gave an inspiring inaugural speech where she showed the connection between her own struggles and those of the activists of AIDWA.  She emphatically countered the claims of right wing nationalists by stating that the daily struggles of women activists for the rights of their sisters was the ultimate form of ‘desh bhakti’ as it helped them to live a decent life of dignity. On the other hand the irrational fake nationalism of organisations like the RSS brought more harm and divisiveness in the society.  The work of her organisation, the Maharashtra Andhashraddha Nirmulan Samiti, has to be seen in this context. She shared her experiences and recalled the sacrifices made by Kalburgi and Pansare and the strong support they received from Left and democratic organisations, particularly some leaders of AIDWA. In the end, she called upon all democratic and Left organisations to unite against the current communal and rightwing dispensation.

Following this, Brinda Karat gave her inaugural address where she recalled the traditions of struggle and sacrifices made by the founders of AIDWA. She placed the key issues that need to be deliberated in the conference. She asked the conference to take into account the challenges posed by the neo-liberal communal political ruling class, whose actions were against the constitution of the country. The urgent need was to build a united platform and take up the issues of historically deprived groups like minorities, dalits and adivasis who the Sangh Parivar was trying to incorporate within its fold. She hoped that the conference would come up with a credible strategy for countering the corporate forces who provided foundational support for the spread of communal forces.

The third and fourth days of the conference witnessed a rich and lively discussion on the reports presented by the president and general secretary. More than fifty delegates from twenty three states discussed current political situation and the organisational challenges faced by them.  Five major points were noted by the delegates. First, they noted with concern that violence and atrocities against women was increasing not only in India but in the entire world, especially our neighbouring countries. A suggestion was made for taking the lead in building a common platform to take up women’s issues jointly with the neighbouring countries. Second, the delegates shared their experiences regarding their daily struggles against communal violence. In particular mention was made on the extensive work that has been done in taking up fake cases against the minorities and also providing support and relief to rape and other victims of communal violence. Delegates also noted that there was a need to have a more comprehensive campaign against the alliance between obscurantism, neo-liberalism and right wing nationalism. Thirdly, delegates narrated the challenges faced by ordinary women in their daily lives due to the impact of neo-liberalism. The problems of dalit and adivasi women, women from the minorities and other working class women in the unorganised sector and the urban poor were highlighted in the discussion. Fourth, the question of land rights and control over natural resources was focused upon. In this context experiences were narrated about the struggles of combating land acquisition by corporate houses. The issue of land rights for women was also focused upon. Fifth the issue of police repression received attention from almost all the states. The alliance between ruling parties and police was highlighted in the case of West Bengal. Attacks by emboldened RSS activists against Left activists was also a subjected of discussion. The delegates shared their experiences about the difficulties they were facing in performing their daily organisational work. All the three reports were passed after the discussion.

Seven commission papers were presented on the afternoon of the fourth day in order to highlight important issues of contemporary relevance. The first commission paper was on ‘Women and the undermining of local self government’ presented by Mariam Dhawale, Manjeet Rathee and Jagmati Sangwan. The second paper was on ‘Nationalism’ which was presented by Subhashini Ali. The third paper on ‘Women workers in the unorganised sector’ was presented by Archana Prasad and Madhu Garg. The fourth paper on ‘Trafficking and prostitution’ was presented by Ishita Mukherjee and Malini Bhattacharya whereas TN Seema was incharge of the fifth paper on ‘Combating alcoholism’. The sixth paper on ‘Environmental issues and women’ was piloted by Sudha Sundaraman and Nandini Mukherjee and the last paper on ‘Property and land rights of women’ was presented by Kirti Singh. Experience sharing by delegates in all seven commissions highlighted the ground level reality and the in-depth knowledge of the AIDWA cadre.

In all, ten resolutions were adopted by the conference. The condolence resolution was placed in the inaugural session by Malini Bhattacharya. It paid homage to Fidel Castro, Shyamali Gupta, Manjiri Gupta, Sudha Bindu amongst other national and international leaders. A resolution to commemorate the centenary of the ‘Great October Revolution’ was also moved by the presidium and adopted by the house. Thereafter eight other resolutions were passed namely: ‘Gender justice, laws and triple talaq’; ‘Against honour killings’; ‘Against demonetisation’; ‘For rights of urban women to essential pubic services’; ‘In defense of scientific approach and rejection of obscurantism’; ‘For universal maternity entitlements’; ‘Against politics of terror and attack on democratic rights of women in West Bengal and Kerala’ and finally a resolution ‘In support of the adivasi women of Chhattisgarh’.

The conference felicitated Radhika Vemula. Four women activists: Debaashri Senapati (Bengal), Santosh (Haryana), Satyawati (Andhra Pradesh) and the survivor of the Ashiyana gang rape case (UP) were felicitated in the inaugural session. K Hemalata, the first woman president of CITU was also felicitated and she addressed the gathering.

Representatives of several mass organisations came and greeted the conference. They were former president of CITU, AK Padmanabhan; Vijaya Raghavan from All India Agricultural Workers Union; K Shanu from Students’ Federation of India; MB Rajesh, DYFI president and MP, and NK Shukla from Kisan Sabha. Annie Raja of the National Federation of Indian Women greeted the conference by sending a written message.

Delegates were introduced to the rich cultural heritage of Bhopal during the conference. Cultural programmes were held every night. Nagin Tanvir of Naya Theatre rendered folk and revolutionary songs in her powerful voice in the inaugural session. Women responded to her very enthusiastically. A Kavyitri Sammelan was also held on the first night which was presided over by Shubha. Well known poets Nilesh Raghuvanshi, Shahnaaz Imrani, Shubha and Chandrakala Pandey and many others read their poetry. On the third day, two evocative plays were performed by Madhya Pradesh Gyan Vigyan Samiti and the Kannur district committee, Kerala.  The solo play ‘Main Savitribai Phule’ was performed by Sushma Deshpande on the fourth day.

Two books, Pearls of Sweat edited by Neela and Meenakshi Bali (Karnataka) and Nameless, Faceless: Victims in the Criminal Justice System by U Nirmala (Tamil Nadu) were released. The AIDWA calendar and diary for 2017 as well as a special issue of Samya on Madhya Pradesh were released at the conference. A souvenir was also brought out by the reception committee on this occasion.

The last session on the fifth day began with the presentation on the reporting on the discussion of the commission papers. The report of the credentials committee was presented by Maimoona Mollah.

Finally, the conference came to a close with the inspiring speech of the new general secretary, Mariam Dhawale who outlined the contemporary tasks and also hoped that the organisation will build a united struggle against both, communalism and neo-liberalism. The conference gave a call to all AIDWA units to celebrate Suseela Gopalan Day on December 19, 2016 and Savitribai Phule Day on January 3, 2017.