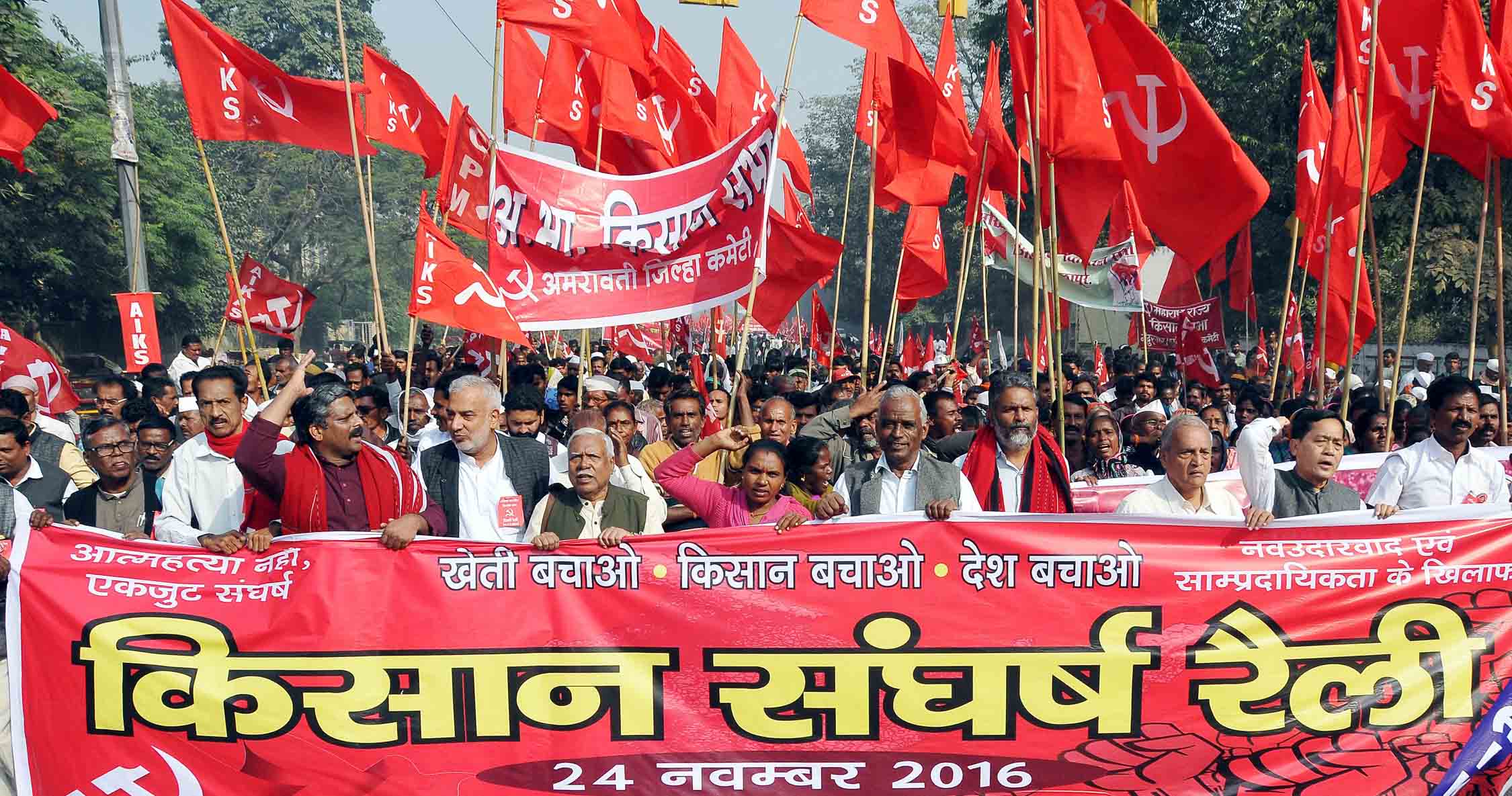 THE three week long Kisan Sangharsh Jatha, organised by the All India Kisan Sabha (AIKS), concluded in a huge public rally in New Delhi on November 24, 2016. The jatha originated from four different destinations in India – Jammu, Kolkata, Virudhunagar and Kanyakumari. Each jatha led by their leaders – Amra Ram, Hannan Mollah, Vijoo Krishnan and P Krishnaprasad respectively – travelled a cumulative distance of 25,000 km covering almost all regions of the country. The deepening agrarian crisis in India, exacerbated by the neo-liberal, anti-farmer policies of the present BJP government provided the immediate backdrop to these jathas. Over the course of the three weeks, the four jathas met farmers, agricultural workers, tenant farmers and other agrarian classes to take the message of an impending struggle while at the same time, picking up experiences and specific concerns of these classes.

A huge marquee was setup to house the thousands of farmers and agricultural workers who would travel from all over the country at Ramlila Grounds. The grounds and the adjoining areas were dressed in red with banners and flags of AIKS adorning the area. These banners, carrying the demands of the jatha, sent a distinct message of the weeks of labour that had been put into organising the big culmination.

The profound and pervasive nature of the agrarian crisis is perhaps, India’s worst kept secret. The mounting number of farmers committing suicide is emblematic of this crisis, though and this is the greatest travesty, it is hardly capable of conveying the nature of the crisis. The number, according to available data, stands at 4 lakhs – a number which has assumed the proportions of a state-willed genocide. And yet, it is this frequency with which suicides are being reported from the countryside that is making the powers that be numb to the real message of the crisis. As participating workers from Maharasthra and Haryana pointed out, the level of food shortage for the veritable ‘annadata’ is a matter of serious concern. It was pointed out by AIKS members that malnourishment is on the rise across states and so is death due to malnutrition. Prices for food items as well as input costs have been steadily increasing and the breakdown of institutional support has adversely increased the power of local moneylenders, who have begun acting as rural elites. The cycle of rural indebtedness does not necessarily need to end in farmers’ suicide but is a major cause for pauperisation and dispossession in most regions. As pointed out, one major way of preventing this cycle is to increase the institutional support given to farmers for carrying out their activities. The recommendations made by the MS Swaminathan Committee, chief of its demand being - calculating minimum support price on cost of production plus 50 percent, was one of the tall claims made by the then canvassing Narendra Modi. As has been the case with most of Prime Minister Modi’s electoral promises (affectionately peddled as jumla, by his own colleagues), no effort has been made to implement the committee’s key recommendations. Instead, the government drafted a draconian Land Acquisition Bill, with the purported intention of improving the ease of doing business in India. The fear of losing land with no job prospect in sight (according to government data only 1.35 lakh jobs have been generated in the last two years in India) and the deliberate ways to throttle an ameliorative act of parliament, National Rural Employment Guarantee Act, has thrown the entire agrarian sector in the throes of deep uncertainty and despair.

As you walked through the marquee at Ramlila Grounds on the night of November 23, participating peasants and agricultural workers began to look almost indifferent to the challenging structural issues that confronted them.  The recent move by the government to demonetise the currency notes in India has further added to their vulnerability. Vijoo Krishnan who led the Virudhunagar Jatha shared his observations, “Within a week of the announcement of demonetisation, our jathas began attracting a larger audience as the loss of currency began having a greater resonance with people.” Jaswinder Singh, AIKS Madhya Pradesh, echoes the same sentiment, “You could observe how the initial excitement around this move began to dissipate within days and while a section still remains hopeful of this policy, a growing number is feeling resentful of the hardships that have been caused.” Many others at the marquee shared their own experiences. An AIKS leader from Khagariya district bemoaned the present state of affairs and felt that mobilisation from his own district was not up to what he had intended because of the hurdles thrown open by the new policy. However, a participant from Dhanbad was more hopeful. She felt that despite the ongoing work of harvest of wheat and paddy crops, participation from her area had swelled because people felt that the Delhi March could be a way of registering their protest against Modi’s demonetisation.

The November 24 Rally began with an impressive show of solidarity as thousands of farmers and agrarian workers, with their families marched in a burgeoning sea of red from Ramlila Grounds to Parliament Street. A huge public dais welcomed them there, and leaders from the central and state leadership of AIKS as well as All India Agricultural Workers’ Union and other allied political and social organisations addressed the crowd. NK Shukla from the AIKS centre welcomed the participants. Amra Ram, national president of AIKS spoke first and congratulated the participants for showing up in such tremendous numbers. He reiterated the key demands of the event including farm waiver to the middle and small farmers, crop support and farmers’ pension. He was followed by Hannan Mollah, Vijoo Krishnan and P Krishnaprasad who spoke from their personal experiences from their time traversing the length and breadths of the country. Mollah informed the gathering that a representative delegation had approached to meet the prime minister with a 15- point memorandum of demands and exhorted the PM to come clean in front of the agrarian classes, men and women who constituted the biggest constituency in our democracy (It was later informed that the PM had refused meeting with the delegation). Krishnan spoke of the anti-farmer attitude of this government and their lackeys from their open hostility to the jatha and even threats to hurl bombs at the inauguration of his particular contingent. Unalarmed by such hollow posturing, the jathas continued their work and reached out to diverse social groups.

Sitaram Yechury, general secretary, CPI(M), and Atul Kumar Anjaan, national executive member, CPI also addressed the gathered people. Yechury was unrelenting in his criticism of the present government’s attitude of neglect and condescension towards the poor. He recalled the rousing call of ‘Jai Jawan, Jai Kisan’ from his youth and bemoaned that in Modi’s India, neither the jawan, nor the kisan was looked after. He reiterated the need to mount fresh struggles on the street and promised people that the CPI(M) will be unwavering in raising people’s issues in the parliament. He accepted a copy of the 15 point memorandum and conveyed his Party’s support for each one of the demands listed there.

Sunnet Chopra, joint secretary, AIAWU, was blistering in his attack on the present government. He implored people from all classes to remember that the only path of progress is the path of struggles and agitation. In a speech laced with metaphors and poetics connected to land, he said that those who harvest sugarcane will enjoy the sweet fruit of their labour only if they are ready for a protracted struggle.

Similarly many other speakers including social activist Medha Patkar and Ashok Dhawale, all India joint secretary, AIKS, were next to address the gathering. They both spoke about the significance of collective actions in forcing accountability on those who governed. Dhawale likened the event to a jolt to the economic trajectory that the successive governments at the centre had taken.

The huge gathering at the Parliament Street should be stern reminder to this government that its stay in power is at the mercy of this country’s people. People of India have come and voted very strongly with their feet and closed fists. For Modi and his cabinet, there is still time for amends.