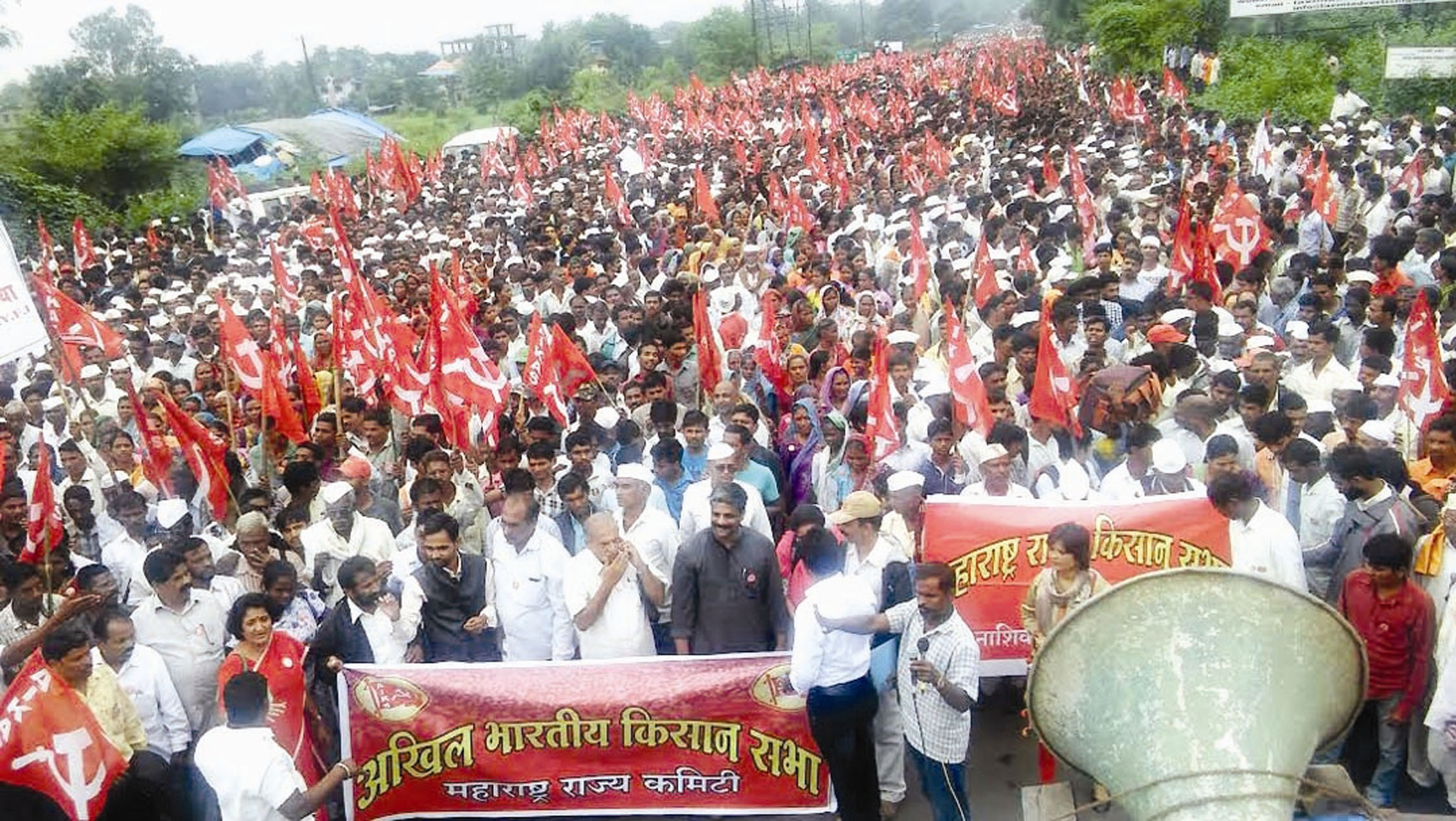 THE 50,000-strong statewide adivasi struggle at Wada in Palghar district on October 3-4, 2016 was a mass struggle to remember and cherish. The earlier one lakh-strong two-day statewide peasant siege under AIKS leadership at Nashik on March 29-30, 2016, on the four burning issues of peasants – loan-waiver, remunerative prices, drought relief and land rights (see report in People’s Democracy/Loklahar, April 4-10, 2016) had brought the chief minister of Maharashtra to the negotiating table and he had then conceded some important demands. He had promised that the demands of adivasi peasants would be implemented within three months. But although six months had passed, nothing had moved on the ground.

Another grave problem came to the forefront in Maharashtra in the last couple of months. That was the issue of malnutrition-related deaths of children, an overwhelming majority of which were in the adivasi areas. The media reported that in the last two years 2014-15 and 2015-16, 9,049 children below the age of five years died due to malnutrition. And in the first five months of 2016-17 alone, ie, April to August, the number of child deaths soared to the shocking figure of 9,563! The tribal development ministry and the women and child development ministry, both headed by BJP ministers Vishnu Savra and Pankaja Munde, came in the eye of the storm.

That is why the AIKS state council decided to renew the adivasi struggle in a new form. The tribal development ministry is not only the designated nodal agency for the implementation of the Forest Rights Act (FRA), but it also holds the key to all other tribal issues.

Hence it was resolved to lead a massive gherao of the house of the tribal development minister at Wada to highlight these issues. Other mass fronts like the AIDWA, DYFI, SFI and the AARM are active in the adivasi areas. After mutual consultation with them by the AIKS, they also decided to make this a united mass action on their own demands.

Intensive preparations were made for this struggle for the last two months. In districts like Thane-Palghar, Nashik, Ahmednagar, Pune and others, large tehsil-level conventions of adivasi peasants, women, youth and students were held. They mobilised several thousand people. Over one lakh leaflets were distributed. Hundreds of village and hamlet meetings were held.

The memorandum of demands was submitted to the minister by the AIKS at his Wada home well in advance on September 22, with a request that he consult all concerned departments and be prepared with a positive response on October 3. He agreed.

As a result of all this preparation, on October 3, 2016, over 50,000 adivasi peasants, women, youth and students from all over Maharashtra under the joint leadership of the AIKS, AIDWA, DYFI, SFI and AARM held an unprecedented gherao agitation outside tribal development minister Vishnu Savra's house at the sub divisional centre of Wada in Palghar district.

The lion’s share of the mobilisation was from the two citadels of the movement in Thane-Palghar and Nashik districts. There was good representation from districts like Ahmednagar, Pune, Nandurbar, Yavatmal, Buldana, Nanded, Sangli, Satara and Kolhapur. While the peasant mass was preponderant, there were also thousands of women, youth and students. As was decided, the SFI first led an independent march, and then joined the huge mass that followed.

The huge and militant mass nevertheless broke the heavy police cordon with determination and reached the lane to the minister’s house. Due to fear of this action, the BJP minister fled his hometown Wada the previous night on October 2, claiming that he had to attend the cabinet meeting at Aurangabad on October 4. This was in spite of him committing to an AIKS delegation on September 22 that he would be there in Wada on October 3 with all concerned officials.

The leadership of the mass fronts refused to budge and the gherao continued, with a massive public meeting and speeches by the leaders condemning the callous neo-liberal policies and poisonous communal conspiracies of the BJP-led governments at the state and at the centre. The speakers concentrated on the burning issues of the adivasis in particular, and of all sections of the working people in general, and emphasised that unity, struggle, organisation and political awareness were the four keys to future advance.

It was very significant that the huge mass remained unperturbed in spite of heavy rains on the night of October 3. Throughout the night, the people were held spellbound by a programme of revolutionary songs on the one hand, and traditional tribal dances on the other. Volunteers of the Thane-Palghar district and Wada tehsil made excellent arrangements to provide cooked food to thousands of participants on the night of October 3. Activists from all tehsils brought bags of rice collected from the people. The CITU Thane-Palghar district conference held recently gave a clarion call to all its worker members to contribute Rs 100 each for this peasant struggle.

Under the relentless pressure of this action, the minister finally directed the Maharashtra tribal commissioner Rajiv Jadhav to rush to Wada on October 3 night and the delegation had a five-hour long discussion with him and other officials from 10.30 pm to 3.30 am. The state tribal commissioner gave positive assurances on many burning demands of the struggle. Further, the minister gave a letter the same day, setting up a special meeting at Mantralaya in Mumbai with all the concerned officials on October 7 to discuss and decide on the demands.

In view of this, the gherao and road blockade stir was suspended at 5 am on October 4 with a massive public meeting of tens of thousands of people. The meeting was presided over by AIKS state president Kisan Gujar. Vilas Sable (SFI), Ramdas Sutar (DYFI), Mariam Dhawale (AIDWA) and Ajit Nawale (AIKS) reported on the positive discussions with the state tribal commissioner and about the ensuing meeting with the minister on October 7. Ashok Dhawale (AIKS), in the concluding speech, warmly congratulated the tens of thousands of participants, summed up the gains of this struggle and placed the tasks for future advance.

The Wada gherao and road blockade continued for 16 hours with tens of thousands of people. All highways from Wada leading to Mumbai, Thane, Bhiwandi, Palghar, Dahanu, Talasari, Surat, Jawhar and Nashik were completely blocked for 16 hours as a result of this mass struggle.

On October 7, as agreed upon, a high-powered meeting of the delegation was held with the tribal development minister Vishnu Savra and concerned officials in Mantralaya. They included secretaries of half a dozen departments and half a dozen district collectors of tribal districts. The negotiations continued for full five hours from 11.30 am to 4.30 pm until concrete decisions were taken on the major demands. The areas in which these decisions were taken: 1. Concrete steps to ensure stringent implementation of the Forest Rights Act (FRA) within the next six months; 2. A series of immediate steps to curb severe malnutrition in the tribal districts; 3. Steps towards vesting the massive amount of temple lands and varkas lands (meaning lands that are in the possession of, and are being tilled by adivasi peasants for decades, but which are still in the names of the former landlords who had earlier usurped them from the adivasis by hook or crook, and who were driven away at the time of the famed Adivasi Revolt) in the names of the tillers; 4. Decision to reimburse within four months the large amounts that thousands of peasants who have leveled their lands have spent, as per the padkai scheme of the government; 5. Several steps to improve the deplorable condition of the adivasi hostels and ashram schools in the state. 6. Steps to improve the public distribution system (PDS) and to curb corruption; 7. Stringent implementation of the MNREGA in the tribal districts.

NEED FOR VIGILANCE AND FOLLOW-UP

It has been decided to propagate this victory in the adivasi districts by means of leaflets, public meetings and rallies in the weeks ahead. At the same time, the need for vigilance and effective follow-up of this struggle with the state and local government authorities has been stressed.

The AIKS state workshop that will be held on October 24-25, 2016, will take appropriate decisions on this, and also on intensifying peasant struggles on their burning issues in the vast non-tribal areas. This state workshop will aim to make a great success of the AIKS nationwide jathas (two of which will pass through the two ends of Maharashtra) and will also plan to mobilise 10,000 peasants from Maharashtra for the AIKS Delhi rally on November 24, 2016.