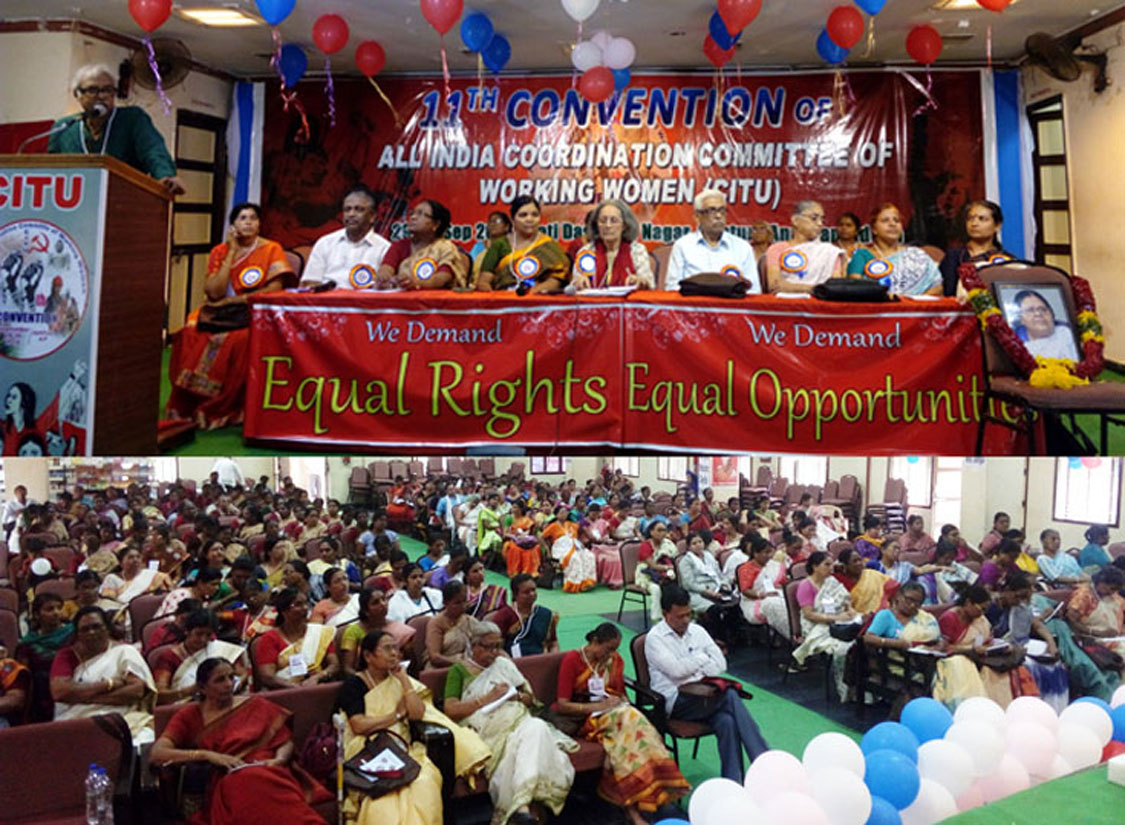 THE Eleventh Convention of All India Co-ordination Committee of Working Women (AICCWW) was held in Guntur, Andhra Pradesh for two days, on September 29-30, 2016. The venue of the convention is named after Comrade Arati Dasgupta, who was one of the prominent leaders of the working class movement in West Bengal. The convention started with the flag hoisting by Neelima Maitra, veteran leader of the AICCWW and working committee member of the Centre of India Trade Unions.

196 delegates from 14 states participated in this convention. Women activists, who are the office bearers in various tiers of the CITU and women workers who day-in and day-out face the brunt of the anti-worker policies of the rulers, took part in this convention as delegates. Delegates from fraternal organizations – insurance, bank, medical representatives, central and state government employees also participated in the convention.

The conference concluded after chalking out the future course of action to fight against the ill effects of the neo-liberal policies and to strengthen the Indian working class movement by bringing more number of working women under the banner of the CITU.

Tapan Sen, CITU general secretary, inaugurated the convention. At the outset, he congratulated the women workers of the country who played a frontline, militant role in the recently held September 2 Strike. In his inaugural address, he said that this convention is a part of the organisational exercise that precedes the all India conference of the CITU that is going to be held at Puri in the month of November 2016. He also said that the report that is going to be adopted by this convention is going to be part of the general secretary’s report to be placed in that conference. He drew the attention of the participants to the attacks that are being unleashed by the present day Modi led central government. In a deceptive manner, the BJP government is taking away whatever was achieved by the hard fought struggles of the working class. The Maternity Benefit Act is being sabotaged through the labour law reforms, by amending the Small Factories Act. He told the delegates that the obscurantist policies of the Sangh Parivar and the activities aimed at communal polarisation are unleashed in order to divert the attention of the people from the real issues and divert them from waging struggles against such policies.

He called upon the delegates to involve themselves in mobilising the workers of the country, especially the women workers against the attacks that are being unleashed by the implementation of anti-people, anti-working class, anti-national policies of the central and state governments.

Tapan Sen said that the crucial task of this convention is to assess our work of organising the working women, review the factors behind the achievements and failures. This assessment will help us in advancing further. He said it was the pioneering initiative of the CITU to focus its attention on organising the working women. It was in 1979 that the AICCWW was formed. Later, other trade unions started paying attention to the women workers. Pointing out to the lacunae, Tapan Sen said working women’s activism is not reflected in the membership of the CITU. He impressed upon the delegates the urgency required in taking up the issues concerning the working women seriously and in organising them. He said, “We have a vision and we have an immediate task on hand. We should not delink both. If we do that we will fail in achieving our goals.” He underlined that strengthening the participation of women and promoting them to the leadership levels is linked to the vision of the CITU.

K Hemalata, convenor of the All India Co-ordination Committee of Working Women (CITU) placed the report. She congratulated the working women in various sectors for the militant struggles they had waged in the recent times. Working women in garment industries in Bengaluru and in Visakhapatnam; Anganwadi workers and helpers, ASHA workers, Mid-day meal workers and many more who took part in the historic September 2 Strike have been in the forefront in fighting the anti-worker policies of the governments.

Underlining the objectives with which the AICCWW was formed and the work to be carried out by it among the working women, she pointed to the following points:

·         To help CITU in developing leadership from among the women workers

The report discussed the efforts that were made to achieve the above tasks and the shortcomings in implementing these tasks. Hemalata underscored the importance of organising working women. She said the CITU’s aim of uniting the working class and launching struggles on their issues, cannot be achieved unless the working women who are an important section of the working class are organised. Therefore they have to be united under the banner of CITU, to intensify struggles against exploitation.

The policies pursued by the present BJP government are aimed at dividing the working class and diverting their attention. She said the regressive ideology of the BJP is evident from the views they hold about women. A BJP leader said women should bear at least 10 children; in Haryana they invited a religious person to address their state assembly, in which he said that like a wife follows a husband, so should the politics follow dharma. The concept of women’s equality is attacked by the BJP’s regressive ideology. The fight against these policies has to be intensified, she said.

Pointing out to the weaknesses, Hemalata said that although there is some improvement, still there is resistance to elect women delegates to the conferences, despite the rise in women membership in the CITU. Women’s composition in the leadership is not commensurate with the increase in membership. There is a tendency to confine work among women to only organising the scheme workers. Referring to the aspect of whose responsibility it is to organise working women, she emphasised that advancing the work of CITU among working women, is the responsibility of the CITU at all levels. It is part of the objective of CITU to unite the entire working class to effectively fight and defeat the anti-worker, anti-people policies of the ruling classes. She reiterated that the specific problems of working women should be taken up from the union platform. She said even today, only few unions include issues like unequal wages, maternity benefits, crèches, sexual harassment, separate toilets and rest rooms etc in their charter of demands and mobilise their entire membership in agitations and struggles on these issues.

The delegates from various states of the country deliberated on the report submitted. 24 comrades participated in the discussions and enriched the report with their experiences. After the reply of the convenor, the report was unanimously adopted.

The convention proposed a change in the structure of the co-ordination committee that is to be formed. This proposal will be discussed and ratified by the all India Conference of the CITU that will be held in November in Puri.

For Respect and Rights

LOOKING into mirrors is always nice. Similarly, listening to voices. Sharing experiences. A chance for all of this is what had happened in the CITU Working Women Convention in Guntur, Andhra Pradesh.

Moving around the convention area itself is an experience – the air, the vibrations between the participants are something to be felt – much more than can be described. Here are gathered the women workers coming from many parts of the country to discuss, share and plan their work, rights and action.

Where to start? Start from work. Yes, is what we do considered work? That is where the starting point of the convention is. This is unlike most of the other meetings or conferences of trade unions. If it is a gathering of workers, the discussion will be not on whether they are working or not, but on how much are they being paid for their work, the rate of exploitation, etc, etc. But for working women, it has to start from work itself. This in itself shows the huge bias existing in our society towards women and their work.

Exploiters never value women's work. Equal pay for equal work always remained a demand yet to be realised in many sectors where women constitute substantial workforce. It took lot of struggles even for the trade union movement to own up to this demand. A step forward, indeed.

Move around the convention hall and talk with the delegates and we will understand what really these women can(not) do. Here are women who had challenged the social stereotypes and mobilised women on varied issues. Not once or twice. But, consistently. Not only in the glare of media flash lights, but even ignoring the media blackouts. These are the women who had mobilised women who were working in their houses – preparing food for their fathers, husbands, children, sending them to schools, offices, factories, washing utensils, clothes, fetching groceries, vegetables and etc – all the while getting ready for their own work in work places (as if what they were doing in their houses was not work at all!). And in work places, these are the women who talk with their colleagues, discuss their problems, identify issues, find out the causes, reason, mobilise and organise struggles. Usain Bolt’s 9.58 seconds appear too long to cover 100 metres! Imagine! They too have only a twenty-four hour day, two hands, two legs, one head and a heart for their family. And they are putting all these to the service of their other workers, for which they are ‘branded’. Only if these deeds can dawn some realisation in our dear society!

Take note. Please make way, they are on the move.

The convention hall wrestled with many such questions. It had hosted women who fought police with equal or more ferocity as they had with those in their houses who were not allowing them to assert their rights. It had seated those women who had stood against sexual harassment both in workplaces and in their households – not to forget while commuting between these two points. The hall shook listening to all these voices that matter-of-factly narrated all such incidents. And they did it within their twenty-four day, with their two hands, two legs, a head and a heart. No, they will not be decorated as brave-hearts or celebrated as national heroes as they are not ‘stars’. After all, aren’t they so common that they are found in our every household?

For whom are they doing all this? For their family. Yes, they do not deny. They are not hypocrites. But for them, their family is not mother, father, husband, children. It is also you, me, he, she, they, them…we. Yes. They meant. They showed it. One can see it in the convention hall. One in fact felt it. There was a family of working women, which had gathered to share its experiences; discuss their issues. There were shoulders to lean upon and fingers to wipe. There were pats, cheers and shouts. And more…there was seething anger…steely determination…solidarity and a sense of purpose. Change the world. Please Make Way Gentlemen.