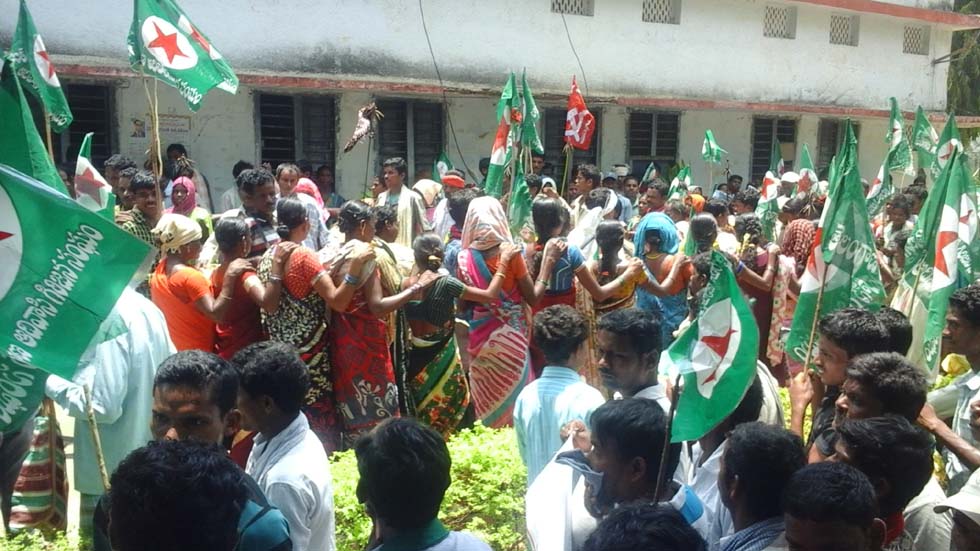 Farmers Fight to Protect Their Lands

Farmers have to make arrangements for crops before arrival of a season. But the Telangana government made plans to grab soon-to-be-cultivated lands by bringing them under the Telanganaku Haritha Haram programme. Police and forest department officials threatened farmers and occupied their lands in many areas. The government began planting saplings on podu lands and attacked the cultivators who tried to hold onto their lands. To oppose the government move, Adivasis and the poor have formed land protection committee in every village. Podu farmers are ready to face any situation to protect their rights over land.
CPI(M) and other Left parties have stood by the poor people. Tribal movement TAGS has been able to unite the poor people, who belong to different political parties, under its flag. Adivasis and the poor, irrespective of their political affiliations, have come together. All India Agricultural Workers Union and All India Kisan Sabha have participated in the struggle and mobilised non-tribal farmers and the poor and have stood by them. As a result, the podu farmers went ahead resisting police action.
On June 20, Adivasis belonging to Warangal responded to the ‘Chalo ITDA’ call by attending the programme in thousands at Eturunagaram. On June 27, thousands of the poor attended the programme at Utnoor in Adilabad district. The tribal who had struggled alone and were afraid of threats became courageous and confident after this mobilisation. The way the leaders of the struggle stood by the poor gave them strength. The unity among tribes and poor farmers during the struggle was appreciable.
Cases were filed against eight Adivasis of Lingala village, Thadwai mandal in Warangal district. There were six women who were kept in jail in Subhakkapalli. Now they have sown in the land where the forest department officials had earlier planted the saplings.
In a separate incident, twenty-seven farmers were in the possession of land in Pandavapur (Gonduguda), Kodem mandal of Adilabad district. A case was registered against them in April, 2004. This enables for issuing the land enjoyment rights as per the Forest Rights Act for the lands which are in cultivation as on December 13, 2015. But denying rights to these farmers, they were arrested as this village was shown on being in ‘tiger zone’. Sixteen farmers, including seven women were kept in the forest ranger’s office without providing them food. Only after intervention of Left leaders and the media, they were offered food at midnight. There were so many such incidents. The farmers prevented the excavators from digging their lands in many villages. Adivasis, Dalits and backward class farmers in Royyuru village in Eturunagaram mandal of Warangal district resisted the forest force when they tried to bring the excavator to the village. They came with the police force and failed in their attempt to take over land. The officials tried their best to create a divide between the tribal and the non-tribals. But the Adivasis resisted this plan of the forest officials by standing by the poor.
Arrests and resistances have continued in 12 centres in Khammam district. The cases have been registered against 222 Adivasis who have cultivated their lands for the last 40 years and 48 of them were put in jail. They all belong to Vagoddugudem and Mallaigudem of Aswaraopet mandal. The forest department staffers planted saplings while 100 constables, eight sub-inspectors and one circle inspector stood there as their protection force. Non-tribal poor farmers struggled militantly and took back their lands. A woman was injured and hospitalised in an attack at Regalla village. New cases have been registered against the farmers who were released from jail on bail. Bhadrachalam MLA Sunnam Rajaiah has passed a resolution on the problem of podu lands in Khammam Zilla Parishad meeting and ITDA Governing Body. A public meeting was held protesting against the arrests of the poor tribal farmers and demanding issuance of the land enjoyment documents to the podu farmers. CPI(M) Polit Bureau member Brinda Karat attended the public meeting.
Another problem came to light at Utnoor -- collection of bamboo in forests. Nearly 6,000 Adivasis and Medara families of Jannaram, Kodem, Khanapur, Dandepalli, Laxettipeta, Indravelli mandals under Kavval Tiger Zone lead their lives by making tools with bamboo wood. They lost their livelihood as the forest department has banned the collection of bamboo wood. A ‘rastha roko’ was organised and the Jannaram DFO’s office was gheraoed and the forest officials were warned seriously. As a result of this, the forest officials returned the bamboo cutting tools which had been seized. They have again started collecting bamboo from forests.
Twenty non-bailable cases were filed in Khammam and Warangal districts. Cases were registered against 523 activists and 187 were sent to jail. The highest number of cases filed was in Khammam district with 14 cases against 428 people.
Workshops were organised at Narsampet and Mahaboobabad to spread the struggle. Officials threatened the poor that they would cancel their ration cards and aadhar cards if the protest continued. TRS leaders have been trying their best to make the poor yield to them in this district. Throughout the state, in many villages poor Adivasis and the tribal people resisted the atrocities of the forest department by plucking out the saplings planted by the forest force.
Though victory has come on several demands, the over-a-year-long struggle still aims to achieve not less than 10 acres of land enjoyment documents for the cultivators in Telangana under the Forest Rights Act; to get the promise of the Telangana government that three acres of land will be given to landless Dalits and Tribes; to provide agricultural loans through banks to the cultivators who possess land enjoyment documents; and to withdraw all cases against the poor tribal and non-tribal farmers. The struggle is going on to achieve the above demands. Finally, the cultivation has started in 95 per cent of Podu lands.