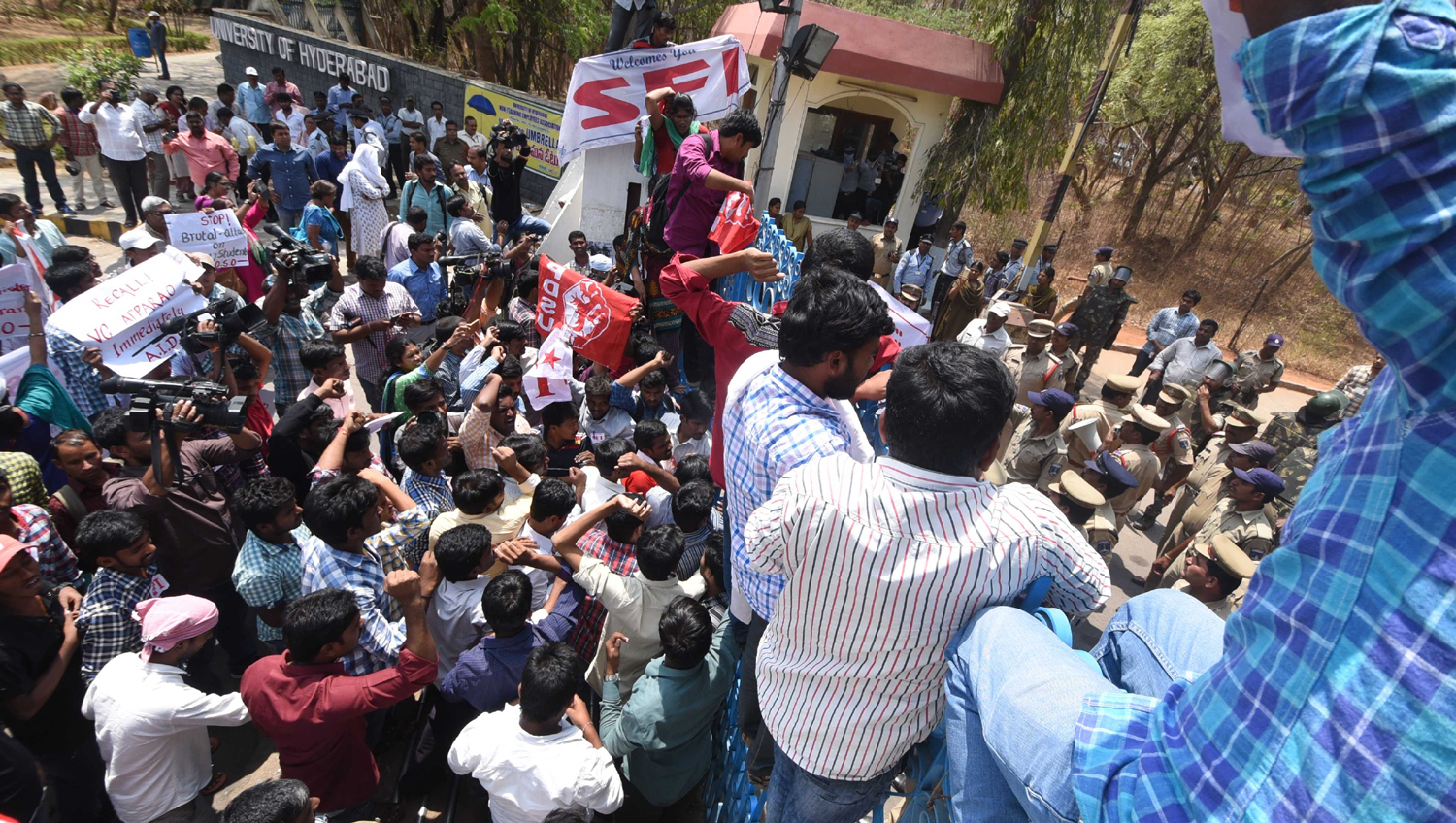 EVEN as the police resorted to repressive measures on students and others who participated in the ‘Chalo HCU’ programme on April 6, demanding resignation of vice chancellor P Appa Rao, the latter had to face heat in the meeting of academic council where several members protested against his chairing the meeting and his continuation as VC of the University of Hyderabad.  On the call of the Joint Action Committee of the students’ unions, leaders of different students’ unions, mass organisations and JAC of Osmania University and students coming from different parts of the state turned out on a large scale to participate in the ‘Chalo HCU’, demanding removal of the VC and cancellation of the meeting of the academic council.  Raising slogans against the VC and communal elements, when they tried to enter the premises of the university to reach the venue where meeting of academic council was going on, they were obstructed and arrested at the main gate by the heavily deployed police.  With leaders and students participating in batches, the protests continued till the evening. Students within the premises of the university also came to the main gate and protested against locking of the same and broke it open and raised slogans against the VC. General Secretary of the state unit of SFI B Sambasiva protested against deployment of the police and suppressing democratic rights of the students and others in the university. B Venkat, state secretariat member of the CPI(M), reminded that on March 25, Chief Minister K Chandrasekhar Rao had condemned the acts of the VC and promised to write a letter to the prime minister and see to it that reply is given within three days, and asked whether the CM had written a letter to the PM.  He said BJP has been taking advantage of the opportunism of the CM in sending the state police to suppress the protests of the students, on the one hand, even while condemning the approach of the VC, on the other.

In the meeting of the academic council, several members protested against the undemocratic approach of the VC, pointing out that he had no moral right to preside over the meeting, walked out of the meeting and some of them even resigned to their administrative posts.  After the meeting commenced, Prof Nandini Sundar, external member from the Delhi University, pointed out that Appa Rao, who is facing cases and admitted to indulging in plagiarism, had no moral right to preside over the meeting. Similarly, Prof V Krishna, controller of examinations of the University, quit his administrative post and walked out. Prof Sripathi Ramudu, head of the Centre for Social Exclusion and Inclusive Policy, told Appa Rao that as VC he has been acting against the SC and ST students.  He also said that the earlier VC, Sharma had ordered for inquiry again into the suicide of Rohith Vemula, as the reports of two proctoral committees were not in consonance with each other and told Appa Rao that he had convened meeting of executive council to nullify the order of the former VC and got some of the students suspended from the hostels till the completion of their academic courses in the university. Announcing that it is a crime, Ramudu walked out. Similarly, Prof Sunita Rani and Prof Deepa Srinivas of the Centre for Women’s Studies also walked out, protesting against undemocratic approach of Appa Rao.  Prof Sujata Patel of department of Sociology, Sheela Prasad of department of Regional Studies and Manjari Katju of the department of Political Science lashed out at the VC that under his dispensation academic atmosphere in the university was spoiled thoroughly and protested against not allowing the media, representatives of the people and workers of human rights’ forums, etc, before they walked out. The SC/ST and Concerned Faculty Forum protested that the meeting of academic council was held in direct violation of all norms of propriety and official procedure.

The police also arrested several students when they tried to demonstrate before the camp-office-cum-residence of the chief minister, demanding removal of Appa Rao from the post of the VC. The Aam Aadmi Party, in its response to the report of the police on the incidents in the university, submitted to the State Human Rights Commission, contended that the police report was full of lopsided facts, selective investigation and blatant lies and pointed out that it was the students belonging to ABVP who had ransacked the lodge of the vice chancellor. Spokesperson of AAP Prof P L Vishweshwar Rao said they had demanded an independent inquiry into the police brutalities.

The general body meeting of the students of University of Hyderabad almost unanimously passed a resolution demanding removal of Appa Rao from the post of vice chancellor, with 948 students supporting the resolution and only one student raising objection to it.  Held on April 12 under the presidentship of the president of the students’ union, K P Juhail, the meeting paid homage to Rohith Vemula.  After discussing the developments in the campus of the university this year, the meeting passed some more resolutions, demanding withdrawal of restrictions and police camp in the university, appointment of a committee of anti-discrimination in educational institutions, and withdrawal of cases foisted on the students and members of faculty of the university.

Forum for Social Justice is going to organise a people’s tribunal on the 16th of this month at Gachibowli on the recent police action in the university and caste discrimination within.  Justice K Chandru, a retired judge of the Madras High Court, will preside over the tribunal and retired academics Ghanshyam Shah of JNU and G G Wankhede of TISS would be its other members.