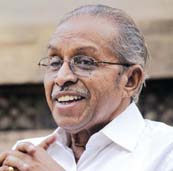 The Central Committee of the Communist Party of India (Marxist) issued the following statement on February 14, 2016.

THE Central Committee of the Communist Party of India (Marxist) pays homage to the memory of poet and lyricist ONV Kurup.

A winner of the Jnanpith award, ONV Kurup, was part of the progressive and Left movement in Kerala and wrote some of the most remembered poems and film lyrics. His association with the Kerala People’s Arts Club and the penning of several songs for it made some of its plays memorable. His lyrics contributed in no small measure in popularising the message of the progressive movement in Kerala.

The Central Committee of the CPI(M) pays tributes to his memory.

The following is the condolence message sent by CPI(M) general secretary Sitaram Yechury on February 14, 2016.

I AM deeply saddened to hear the news of the death of ONV Kurup.

His death has left a deep void. Kerala and the progressive literary movement in the country will miss him.

I convey my heartfelt condolences to his wife P P Sarojini, his son Rajeev and daughter Dr Mayadevi.