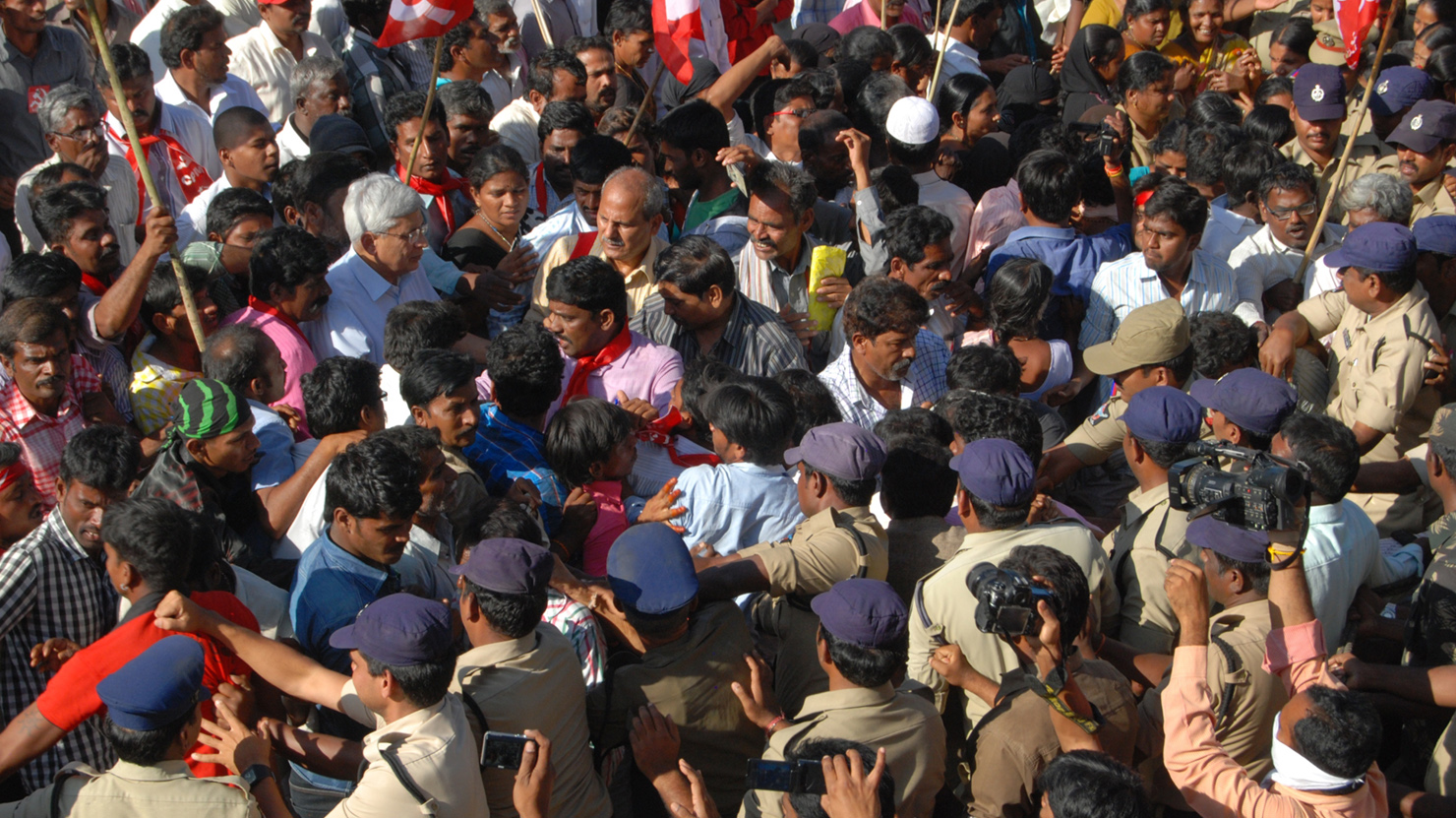 Farmers Fight for Compensation for Land Taken Over for Solar Hub

HUNDREDS of farmers belonging to Nambulapoolakunta in Andhra Pradesh’s Anantapur district have been protesting against the denial of compensation to them after their land was taken over for a solar hub. The government of Andhra Pradesh decided to establish the solar hub at Nambulapoolakunta and the responsibility for its construction was handed over to National Thermal Power Corporation (NTPC). State ministers and revenue officials assured the farmers in gram sabhas that the evacuees will be given a compensation of Rs 2.10 lakh per acre, employment in construction works, land in some extent and goats and sheep for rearing. Ten thousand acres have been taken over for the solar project, but the compensation of Rs 2 lakh an acre did not materialise for hundreds of farmers, many of whom were cultivating the assigned or government land for decades. Corruption in the allotment of compensation has deprived some patta holders of their compensation. As the state government did not address the problems being faced by the farmers, who lost their lands and were not given compensation during land acquisition, the CPI(M) organised dharnas and agitations during the last three months.

CPI(M) Polit Bureau member Prakash Karat visited NP Kunta in Anantapur district and interacted with farmers who have lost their lands. He promised them that the CPI(M) would fight on their behalf till their concerns are addressed. He demanded that the state government implement the Land Acquisition Act, 2013 in letter and spirit while granting relief and rehabilitation package for those who have lost their lands to the upcoming solar power plant in Nambulapoolakunta mandal of Anantapur district.

“The state government should give at least Rs 10 lakh as compensation for each acre and implement the Land Acquisition Act, 2013. How can the government go ahead with the project without fully implementing the R&R package? This is against the very spirit of democracy and the laws enacted by parliament,” Karat said, adding that the state government was keeping aside huge parcels of land for corporates, while the poor were not being adequately compensated. The government is grabbing land from the vulnerable farmers by violating the provisions of the Land Acquisition Act and indulging in corrupt practices and manipulating records to help fake beneficiaries, he said.

“The government has proposed to acquire 15 lakh acres of land in the state for industrialisation and construction of airports. Why is the government acquiring the land for private companies,” he asked. He clarified that CPI(M) was not against the setting up of solar power plants by a company but demanded that the compensation per acre should not be less than Rs 10 lakh. He declared that the meagre amount now being offered is not acceptable and has demanded that Chief Minister Chandrababu Naidu ensure compensation of four times more than what has been fixed at the moment.

Earlier, the district authorities had refused permission for the visit and a public meeting and clamped Section 144 of CrPC within 500-metre radius of the project site, barring public gathering. At the last hour, permission was given for the meeting. Despite this, police did put up roadblocks to prevent the hundreds of people accompanying Karat in a convoy of vehicles. But the people forced the police to lift the barricades. Meanwhile police had issued bind over summons to 22 district leaders of the CPI(M), who had taken part in a protest at Nambulapoolakunta mandal in the past, which had led to pitched battles between CPI(M) activists and police.

As the vehicles carrying party leaders, including Karat, moved towards the Nambulapoolakunta mandal headquarters, police tried to stop them by placing barricades. But, after they were allowed to proceed, at the Nambulapoolakunta mandal headquarters, a public meeting was held where Karat spoke even though police had denied permission for such a gathering.

Karat exhorted the farmers to continue the struggle and warned the state government that it is illegally proceeding with the project without giving compensation to all those who have been affected by it. As the government has not responded to the corruption allegations over land acquisition, the Party, he said, has decided to take up the issue at the national level to secure justice for the displaced farmers.

Karat also addressed the media on the issue of suicides by farmers in the district during the last one year and interacted with the bereaved families at the Party’s office at . The Party’s state leaders Vangala Subba Rao and Y Venkateswarlu had accompanied Karat during the visit.

Karat said he smells a scam in Chief Minister Naidu’s proposal to acquire 15 lakh acres in the name of setting up industries, building airports and establishing solar power plants. He described the whole process as ‘land-grabbing’ by the government. Asking why should the government acquire land from farmers on behalf of private companies, Karat said this proposal had opened the floodgates for the ruling TDP leaders to become land acquisition agents on behalf of both the government and private companies. Karat said that the state has become one of the volcanoes waiting to erupt because of government proposals to acquire thousands of acres from small and marginal farmers. He demanded that the government institute a thorough probe in land acquisition deals to eliminate bogus farmers.

He interacted with the farmers and addressed a public meeting at Sakunala village. The farmers of Orvakal area have been on the warpath resisting the government’s move to snatch their lands in the name of setting up solar power plants and other industrial units. Addressing farmers at Sakunala village, he wondered how the TDP arrogated to itself the role of land acquisition agent for industries.

“Land acquisition is an official process to be taken care of by the revenue department. How could the Telugu Desam Party have a direct role in the process,” he asked. The Airports Authority of India does not permit airports to come up at a distance of 100 km between them. Still the land is being acquired in the name of airports in each district and is being diverted for other purposes, he said and demanded that the process should be transparent. The CPI(M) will fight for the rights of farmers in Andhra Pradesh, Karat assured the farmers of district.