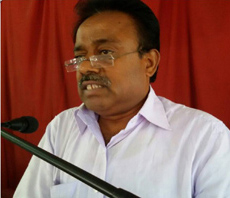 Comrade Prasanna Kumar Is No More

The following is the statement issued by the Centre for Indian Trade Unions on December 23.

Prasanna Kumar started his public life at a young age in the students’ movement and was an active member of the Students’ Federation of India. Later he started organising the workers in different industries in his native district of Bellary and soon became an important trade union leader in the district. He moved to Bangalore to take up more responsibilities in the CITU and became its general secretary and was later elected as national secretary of the CITU. He helped CITU to expand among many more sections of workers and develop it as a state-wide force in Karnataka. He also led several unions in the organised and unorganised sectors, including MICO, BEL, ITC, KSRTC, BMTC etc.

In the sad demise of Prasanna Kumar, not only the CITU but the entire working class has lost a valiant fighter for its cause. His death leaves a big void in the working class movement which is very difficult to fill.

CITU dips its banner in homage to this leader of the working class movement and commits itself to carry forward the cause to which Prasanna Kumar devoted his life. CITU general secretary Tapan Sen will be attending the funeral at Bellary on December 24, 2015.

CITU extends its heartfelt sympathies and condolences to his wife, two sons and all his comrades and friends in Karnataka.

The following is the statement issued by Sitaram Yechury, general secretary of the Party on December 23.

It is with great shock and grief that I received the news of the sudden death of Comrade Prasanna Kumar.

I have known Comrade Prasanna from his days in the student movement. He was a very talented, articulate and able organiser. His untimely death is a big loss for the Party and the trade union movement in Karnataka.

I convey my heartfelt condolences to the entire Party in Karnataka, to his wife and children.

In a separate statement issued on the demise of Comrade Prasanna Kumar, the CPI(M) Karnataka state committee expressed profound sorrow and grief. The state committee dips its banner in homage to this great leader of the working class and commits itself to carry forward the struggle for which Com Prasanna Kumar devoted his entire life.