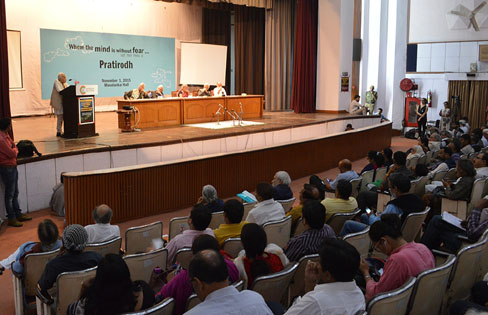 NOVEMBER 1 was the birth anniversary of rationalist Narendra Dabholkar, who was murdered in Pune in August, 2013. So writers, artists and intellectuals from all directions came to Mavalankar Hall at to join a 'Pratirodh' programme. At 2 PM, a huge presence of writers, artists, scientists, historians and cultural activists was witnessed at the  Hall, who came to express their solidarity with the protest movement that erupted after the brutal murder of eminent Kannada writer Prof. M M Kalburgi and when, as an expression of anger, Uday Prakash, an eminent Hindi writer, returned his Sahitya Akademi award, followed by Nayantara Sehgal. The angst expressed by writers was also caused by two earlier murders of eminent writers Naredra Dabholkar and Govind Pansare, who stood for rational thinking and worked against superstitions in our society. They too were killed in a similar manner by the Hindutva fascist forces. The protest movement grew day by day as a host of other eminent writers of various languages and regions began to return their awards or titles, then a number of artistes and filmmakers, scientists and historians joined the movement.

First, it was at the joint call of Janwadi Lekhak Sangh along with PWA, JASAM, Dalit Lekhak Sangh and many other organisations that a huge demonstration took place at Jantar Mantar on September 5. Then on September 16, a delegation of these organisations met the president of Sahitya Akademi and presented a memorandum requesting him to hold at a condolence meeting of Prof. Kalburgi who was a member of its Governing Council. With utter disregard, the request was turned down. Then these organisations at a joint meeting decided to give a call for a silent rally from Safdar Hashmi Marg to the office of the Akademi on October 23, the day when its executive body was to hold its meeting. Before that a joint meeting with two associations of journalists, the Press Club and Women’s Press Corp, decided to hold a solidarity meeting on October 20 at the Press Club. This protest meeting too was well attended by writers, journalists and intelligentsia of NCR. Apart from all these protest actions, we got reports from various parts of the country that writers, artists and intelligentsia every where were agitated over the manner in which the Hindutva forces were indulging in violence, brutality and lynching poor people of minority communities and Dalits on the basis of rumours and showing intolerance bypassing the rule of law in our democratic country. The rabid communal and fascist elements are hell bent upon imposing their irrational and unscientific code of conduct on others’ way of living, thinking and even eating and drinking and thus acting as ‘Talibans’ to terrorise people and threatening India’s diversity, pluralistic cultural ethos and attempting to destroy the very concept of modern India.

The 'Pratirodh' (Resistance) function at Mavalankar Hall was a heightened sequence of all these protest actions where writers, artists, historians, scientists, filmmakers assembled to hear inspiring voices of eminent historians, writers, scientists and representatives of various associations. The function began with the melodious singing of Narasi Mehta’s famous Bhajan, ‘Vaishnav jan to tene kahiye’ that was so loved by Mahatma Gandhi. Then video message of Sharmila Tagore was shown, in which she recited Rabindranath Tagore’s famous poem, ‘Where the mind is without fear…’ in original Bengali and translation in English. We may recall that it was Rabindranath Tagore who had returned his knighthood title to the British Government after the massacre of  innocents at Jalianwala Bagh. The RSS and its ministers and lackeys are arrogantly reducing this protest movement as "manufactured rebellion" and forget that the writers are following the same glorious tradition now that was initiated by Gurudev Rabindranath Tagore against barbarism of the ruling classes of his times.

After the video message of Sharmila Tagore, a video message from famous scientist M P Bhargava was shown and then a similar message from the son of Narendra Dabholkar and daughter of Prof. Kalburgi were played. All of them supported the movement.

Prof. Irfan Habib was the first speaker who exposed the lies of the fake historians of the RSS brand who are projecting mythology as history. He, in a jocular vein, made fun of the RSS ideologues and ‘historians’ who find each and every scientific invention in Hindu scriptures, such as the Vedas and epics. They claim that our ancestors had invented aeroplane, on this Prof. Habib poked fun by saying that it was grabbed from Ravana, so it was invented by Rakshasas, and not by the people on the side of Rama. He quoted many such follies of the RSS ‘historians’ who inject false pride based on false historical myths such as Saraswati river, and said that in the matter of intellect, the RSS is like the forces of the Islamic State who dream of converting the world into an Islamic State. Then Ashok Vajpayi, an eminent Hindi writer spoke on the atmosphere created by the divisive Hindutva elements. Retired justice Rajendra Sachchar, in his address, criticised these elements that are spreading hatred against minority communities and posing a threat to our composite culture. Romila Thapar, a renowned historian, presented the grim picture of the atmosphere of intolerance by citing her personal experience. She said that she had been invited by a college in Mumbai to deliver a lecture on ‘secularism’ but she got a phone call from Mumbai Police that there may be an attack on her. Such is the situation where a lecture on secularism may not be tolerated and the speaker’s face may be blackened as was the apprehension of Mumbai Police. Prof. Zoya Hassan too expressed similar views on the present milieu. Teesta Setalvad who is a victim of regular threats from the Narendra Modi government also addressed the gathering.

Krishna Sobti, the octogenarian Hindi fiction writer, came in her wheel-chair and in a forceful voice read her critical note that inspired all of us who were in the Hall. She too returned her Sahitya Akademi award and fellowship in October, spoke about her days during the Freedom Struggle in the 1940s and how the echoes of ‘Azadi’ slogans were still vivid. "But we didn’t know we were fighting for this. Our country is fast becoming intolerant towards minorities, their beliefs and values." She said it was disturbing to hear that the government was concerned about the population growth of minorities. "They are upset that Muslims, Christians and Sikhs are growing in numbers. But they forget that Hindus were/are in majority."

Mohandas Nemishrai, a Dalit writer, and Ramesh Dixit too addressed the audience.

Dinesh Abroal, a scientist who organised a host of eminent scientists to express their solidarity, also spoke on the situation in which scientific temper is facing bullets. Ali Javed, the General Secretary of PWA, expressed his views on the present scenario. Murli Manohar Prasad Singh, the General Secretary of Janwadi Lekhak Sangh, elaborated how the resistance movement grew with the initiative of joint action of Janwadi Lekhak Sangh and other cultural organisations after the brutal murder of Prof. Kalburgi and extended the support of Janwadi Lekhak Sangh to all such movements that are part of a broad resistance against communal fascism that is now shamelessly fracturing communal harmony and rational thinking in our country. Om Thanvi, the former Editor of Jansatta, conducted the proceedings. All eminent writers, artists, and other intellectual personalities of NCR, young and old, filled Mavalankar Hall beyond its capacity. The conclave adopted a resolution after some amendments in which it is said, "We appeal to our fellow writers, artists, intellectuals, academicians, scientists and all thinking people across the country to be alive and alert to the threats and dangers that our pluralistic culture, creative and intellectual courage, dissent and difference are facing…" The resolution also made a request to the President of India that ‘as the constitutional head he should direct and suitably advise the Government to act decisively and ensure freedom of life, faith and expression’.

Megha Pansare, daughter-in-law of the slain leader, released the book The , Words They Could Not Kill, selected writings of Dabholkar, Pansare ans Kalburgi,  published by SAHMAT, and spoke on the writings of the three slain writers that are included in the book.