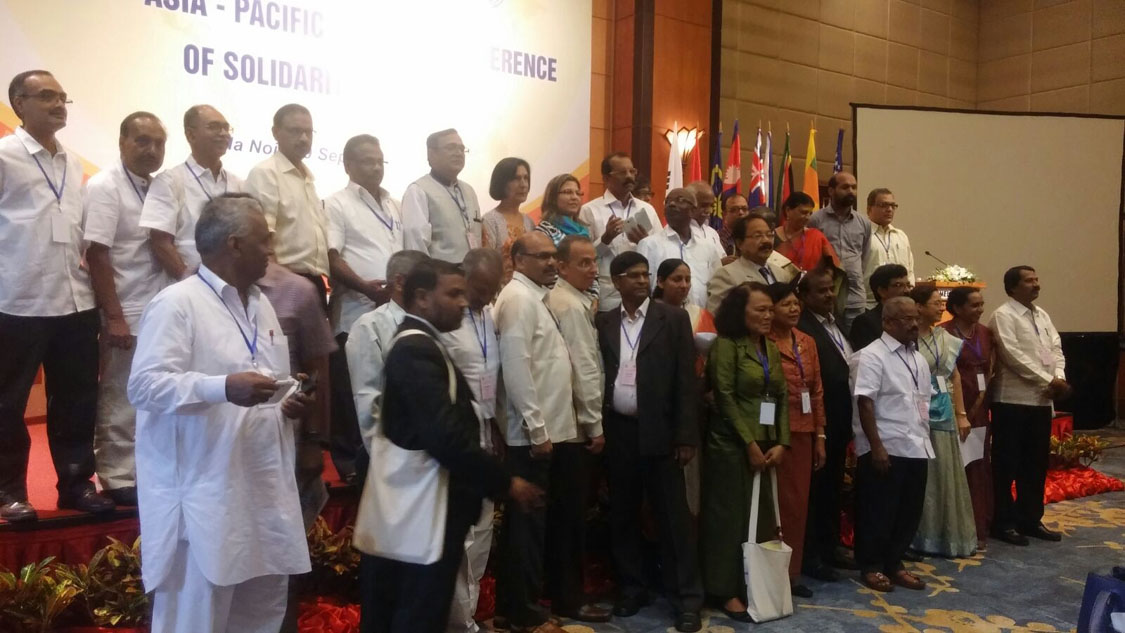 THE seventh Asia-Pacific Regional Conference in Solidarity with Cuba, was held in Hanoi, Vietnam on September 8-9, 2015. 220 delegates from 18 countries participated in this conference.

The Vietnamese Union of Friendship Organisations (VUFO) hosted this Conference with support from the Communist Party of Vietnam (CPV) and the government of Vietnam. The president of VUFO, Vu Xuan Hong said the event is taking place in the historical context of Cuba and the US declaring the normalisation of bilateral relations. Vice Chairwoman of the National Assembly and president of the Vietnam-Cuba Friendship Association Nguyen Thi Kim Ngan extolled Cuba’s attainments and their active contributions to global peace and independence. Supporting and promoting solidarity with Cuba is the consistent policy of the Vietnamese Party, State and people, she said, adding that the two countries have always supported each other despite their geographical distance.

On the last day, the president of the country, Truong Tan Sang hosted a reception in Hanoi on September 9 and met with the leaders of the delegations. He underlined the fact that the conference took place in the context of Cuba achieving a number of successes in external relations, including the resumption of its diplomatic ties with the US and the opening of embassies in the two countries after 53 years of interruption. He believed that the conference will raise voice demanding an end to the embargo against Cuba and calling for continued support to the Caribbean country. Specially embracing Antonio Guerrero, one of the Cuban Five, he shared his personal experiences of torture in prison during the Vietnamese resistance struggle against the US.

A six-member delegation from Cuba attended the conference, led by Kenia Serrano Puig, member of the Central Committee of the Communist Party of Cuba and president of the Cuban Institute for Friendship with People (ICAP). The delegation also included Antonio Guerrero Rodriguez, one of the Cuban Five, who attended the conference as a guest of honour.

Antonio Guerrero, on behalf of the Cuban Five, thanked the solidarity movements of all countries for their efforts to ensure their release from the US prisons. He said that though the US was able to physically imprison them, they failed to subdue their love for their country or their commitment towards the socialist cause. He recalled the poem written by Comrade Ho Chi Minh, in prison, stating that one's spirit cannot be imprisoned.

Our country was represented by 34 delegates. Ours was indeed the biggest delegation, after the host country. The leaders of all the delegations were asked to speak during the conference. There were two commissions formed with the delegates, to discuss about the (i) Role of the solidarity and friendship organisations with Cuba in demanding the lifting of the economic, financial, and trade blockade and embargo against Cuba as the main obstacle for its development and (ii) Ways to strengthen the solidarity movement with Cuba through media to disseminate the reality of the Cuban social, political and economic life. Indian delegation played an active role in both the commissions, participating in the discussions.

Apart from these discussions, there was a presentation on the present socio-economic realities in Cuba by Dreylius, an economist from Cuba. Explaining the changes, she stated that all these changes are done in wide consultation with the people of Cuba and without compromising on the principles of socialism. These discussions will be finally concluded at the Party Congress that is scheduled for the next year.

A final declaration on behalf of the conference, the Hanoi Declaration, was adopted on the last day, unanimously. A five-member drafting committee was constituted to prepare the Declaration, in which, apart from India, Vietnam, Japan, Sri Lanka and Australia were members.

The Declaration strongly rejected all acts and measures as an illegal economic, commercial and financial blockade imposed on Cuba by the government of the United States for more than five decades. It expressed its support to the Cuban people and demanded the immediate lifting of the inhuman blockade.

The Declaration also stated that the restoration of diplomatic relations between Cuba and the United States, and the reopening of embassies in the capitals of the two countries are the result of resistance of the Cuban people and their heroic struggle, as well as international solidarity with Cuba. It also welcomed the decision taken by the president of the United States of America, to exclude Cuba from the list of state sponsors of international terrorism, stating that “Cuba should never have been included” in the list.

The Declaration also demanded the return to the Cuban people the Guantanamo Naval Base, illegally occupied by the US in flagrant violation of Cuban sovereignty. The Declaration vowed to continue spreading the truth about Cuban realities, the process of updating the economic and social model and their socialist Revolution, using all discussion spaces available and to counter the manipulated and negative information about Cuba.

Welcoming the release of the heroic Cuban Five, the Declaration, on behalf of all the delegates expressed its delight 'to embrace and discuss with one of them, Antonio Guerrero Rodriguez, for whose freedom all of us and organisations of solidarity with Cuba worldwide have fought for many years'.

The participants in the regional conference also saluted the 70th anniversary of the proclamation of Vietnam’s independence and the 55th anniversary of the Cuban Institute of Friendship with the Peoples (ICAP). They also congratulated and thanked  the government and Communist Party of Vietnam, the Vietnam Union of Friendship Organisations and the Vietnam-Cuba Friendship Association for the warm hospitality and excellent organisation of the seventh regional conference. They also expressed their firm solidarity with the people of Vietnam in their struggle in defense of their national independence and sovereignty and for a peaceful and stable regional environment to build a more prosperous and beautiful country.

The two-day conference was tightly scheduled to allow for a healthy exchange of opinions among the participants. The VUFO organised cultural events on both the nights, showcasing the rich cultural heritage of the host country, which had enthralled the participants.

The conference provided a platform for our delegates to know the Cuban reality, meet and exchange experiences with the delegates from other countries in the region. It also provided a rare opportunity for the delegates to interact with the Cuban heroes and also directly listen to their experiences in the struggle against US imperialism. Moreover, the delegates also got an opportunity to visit the land of the legendary communist fighter, Ho Chi Minh and witness the transformation Vietnam is undergoing in its course of socialist construction.