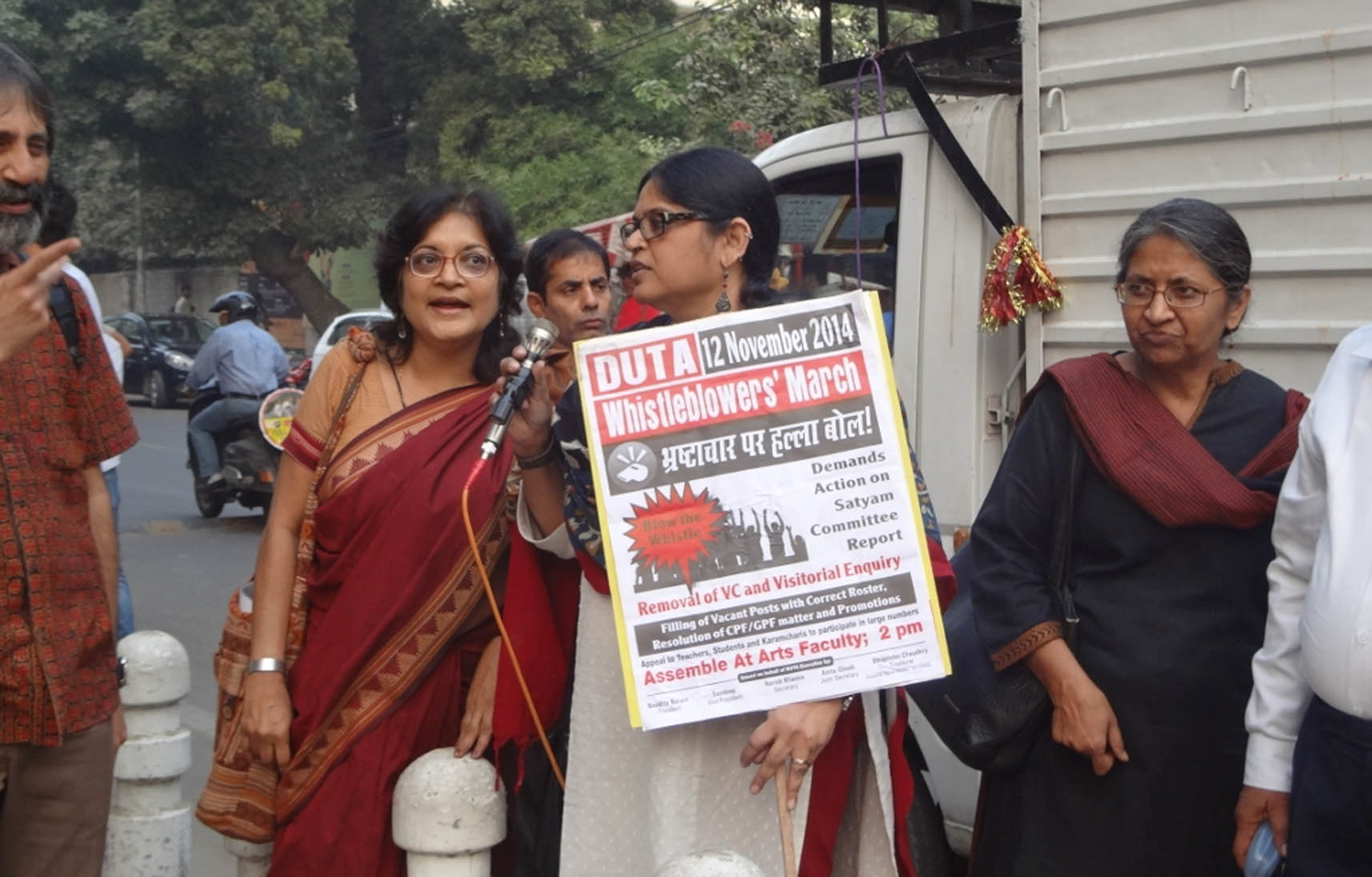 THE Democratic Teachers' Front (DTF) has secured a historic victory in the elections to the Delhi University Teachers' Association, held in the last week of August. DTF's Nandita Narain was re-elected to the post of the DUTA president for the second consecutive term. For DTF, this election marked the third consecutive win and mandate for the leadership of the DUTA. Besides Narain, the entire panel of four DTF candidates for the DUTA Executive Committee was also elected with a handsome vote-share. These winning candidates in the DUTA executive are Bhupinder Chaudhry (second term), Vijaya Venkataraman (second term), Angad Tiwari and Vivek Mohan.

Delhi University has been turned into a laboratory for neo-liberal 'reforms' in higher education. Since 2008, the former union minister of HRD under the UPA-2, Kapil Sibal began issuing a series of diktats which entailed the restructuring of all degree courses at the undergraduate level. The restructuring was carried out by forcibly implementing the semester system and the Four-Year Undergraduate Programme (FYUP) against which the DUTA fought an uncompromising struggle. The DTF led from the front in this struggle. As a result of its relentless campaign, stepped up since DTF assumed the leadership of the DUTA in 2011, the FYUP was eventually rolled back in 2014. However, the NDA government which withdrew the FYUP under democratic presssure has now chosen to bring it back in the form of the three-year CBCS which follows the identical agenda of academic dilution, commercialisation and modular courses. It is clear that these so-called 'reforms' are being pushed at the behest of the World Trade Organisation (WTO) by governments that are inclined to commit higher education to GATS as a trade-able service through which surpluses can be generated at the expense of equity, access and social justice for the marginalised sections and working people. In the Nairobi-round of the WTO, this December, the government seems inclined to formally sign higher education off under the iniquitous clauses of the GATS.

Starting from this year, the CBCS has been implemented without any discussion or consultation with teachers and students in all central universities. Additionally, the government has chosen to ignore the corrupt and authoritarian governance of the present vice-chancellor, the steady deterioration of working conditions of teachers and the widespread unrest among teachers and students in Delhi University. Although all the serious charges of academic and financial misdemeanour have been proven against the VC, he has enjoyed the political protection of the BJP and has remained unpunished. The teaching community of Delhi University has courageously responded to this crisis by re-electing Nandita Narain and DTF to the leadership of the DUTA.

This year, there were four candidates in fray for the presidential post in the DUTA. A total of 6084 votes were polled for the presidential ballot. DTF's Nandita Narain secured 2390 votes and won by a margin of 225 votes. The BJP-supported NDTF candidate secured the second position with 2165 votes. The Congress-backed candidate could only manage 950 votes while the fourth candidate, contesting as an independent, got merely 27 votes. 536 votes were declared invalid.

For a political understanding of this outcome, a comparison needs to be drawn with the results of the previous elections, held in 2013. In the 2013 DUTA elections, the total number of votes polled for the presidential ballot were 6474, out of which DTF's Nandita Narain had secured top position with 2705 votes. She had defeated the Congress-backed candidate (who had secured 1919 votes) with a margin of 786 votes. The BJP-backed candidate had come third with 818 votes while a fourth candidate, backed by another faction of the Congress, had secured 561 votes. Total invalid votes were 471. Besides the four victorious candidates fielded by the DTF in the DUTA executive, another Left candidate had also been elected.

It is clear, this time, the Congress has suffered heavy losses. Having been dormant in the last two decades, the BJP has bounced back to replace the Congress in the second position. This has been made possible through an evident collaboration between the BJP and the Congress in which the university administration has played a vital role. The campaign became polarised between Nandita Narain who has been leading the teachers' collective struggle and the BJP-backed candidate who was representing the DU administration. The Congress effectively pulled out of the contest by fielding a weak candidate and ensuring a substantial transfer of its votes to the BJP. Despite this manoeuvre, the DTF's victory could not be thwarted.

Admittedly, the Left's vote-share has come down as compared to the 2013 elections. However, the reasons for this are obvious. In all the concrete issues confronting the teachers – from promotions to permanent appointments, and even pensions – the vindictive DU vice-chancellor has used his close proximity with the corrupt UGC chairman to ensure a situation of stalemate. Teachers have not got any concrete relief in these matters. The few permanent appointments that have been made by rigging the process are political in nature. In such a scenario, the BJP tried its best to depoliticise the election campaign and target the DTF as a group that was only interested in confronting the government on policy issues but had failed to get any concrete relief for the teachers. Simultaneously, it launched a whisper-campaign among the large section of casual teachers working on adhoc and temporary basis that they could hope for the resumption of permanent appointments only if they would ensure the DTF's defeat and the BJP-backed NDTF's victory in the DUTA elections. Meetings were held to ensnare this vulnerable section of teachers with false promises. Heavy-weight leaders like LK Advani and Gujarat governor OP Kohli presided over some of these meetings. It was also suggested that the next vice-chancellor would be appointed from within the Sangh Parivar and hence, a BJP-backed leadership in the DUTA would be able to negotiate better working conditions. Thus, an all-out effort to project the election as a battle between an idealistic 'leader' and a pragmatic 'dealer' was made.

The BJP's election tactics were designed to undermine and even exclude issues like CBCS, the draconian Central Universities Bill, GATS-dictated commercialisation of higher education, the repeated budgetary-cuts in higher education and the corrupt mis-governance of the university, perpetuated by the current administration. Yet, the DTF continued to seek a mandate to carry on its agenda of militant struggle and create a network of solidarity between various teachers' and students' collectives to help build a nation-wide movement against neo-liberal 'reforms' in education. It was able to do so successfully by logically linking all immediate issues like permanent appointments, promotions and pensions with the direction of government policy. Despite the widespread sense of suffering and uncertainty, the teachers eventually reposed their faith in Narain's leadership. This outcome is extraordinary, considering that the number of teachers working on casual basis is at least half of the total number of teachers currently employed in the university. This is an unambiguous victory for the Left-democratic movement in Delhi University.

An historic sense of responsibility accompanies this moment of celebration. Alongside the fight against neoliberal 'reforms', the DUTA leadership is also expected to strive for better pay package and service conditions for teachers through the next Pay Revision. All preliminary reports related to the 7th Pay Commission indicate that the government will renege on its welfare commitments. Hence, an intense struggle is anticipated on this front as well. After becoming DUTA president, Narain had successfully freed the FEDCUTA from the clutches of a Congress-backed mafia. She also built bridges between FEDCUTA and AIFUCTO in order to restore the earlier links that had been severed in the past. She helped unite the two national-level unions under the common agenda of opposition to the CBCS and a common set of demands related to career advancement and promotions. Due to her continuous interventions, the FEDCUTA and AIFUCTO have lately been engaged in joint action programmes. The experience of the nation-wide joint struggles against the anti-poor Land Acquisition Bill is instructive; it guides us to strive for similar joint movements against privatisation and commercialisation of education. The DTF's victory and continuing leadership in the DUTA has raised hopes that such a nation-wide joint movement of teachers and students can be successfully built in order to pose a powerful challenge to neo-liberal forces that seek to dismantle institutions and destroy public access to higher education.