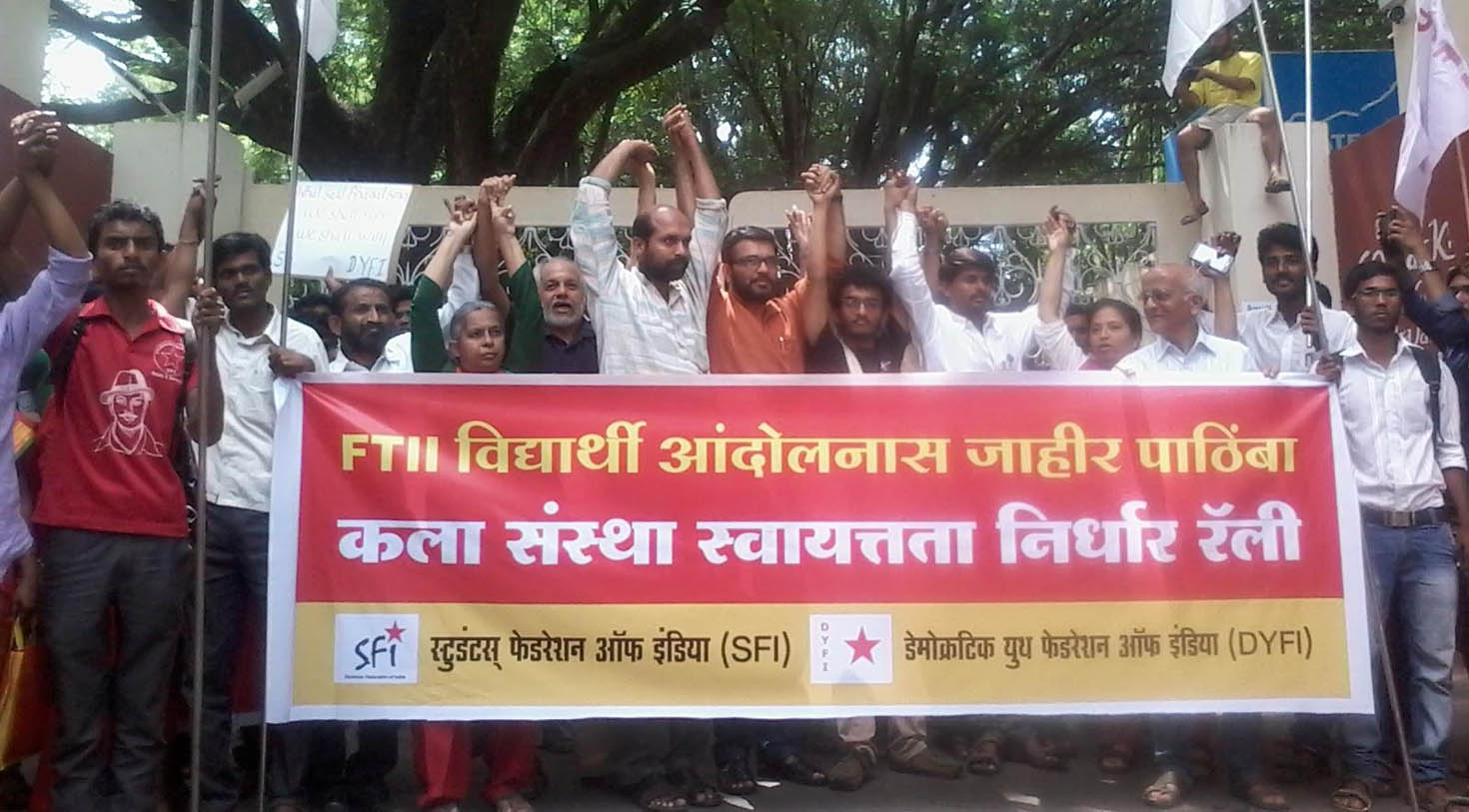 THE Students' Federation of India, SFI and Democratic Youth Federation of India, DYFI have jointly organised a massive rally to the Film and Television Institute of India, FTII, Pune on August 23 in solidarity with the ongoing struggle by the students against the appointment of Gajendra Chauhan as the chairman of the governing council of the institution. The march was followed by a human chain set up in front of the FTII and a vibrant public meeting. MB Rajesh MP, national president of DYFI and Dr V Sivadasan, national president of SFI were among those who joined the protest.

SFI had observed all India protest day on August 20 condemning the police crackdown and the mid night drama at the Film and Television Institute of India, FTII as police raid campus and arrest five students. An FIR is filed on 17 students and 30 others. Five students got arrested and are charged under the sections of rioting, unlawful assembly, obstructing public servant from discharging duty, wrongful restraint and voluntarily causing hurt, of the IPC. The Modi government makes it clear that there will be a silent emergency declared wherever voices are being raised against them.

FTII students are on a strike for the last 74 days against the appointments to the FTII Society by the Narendra Modi led BJP government. The immediate reason that sparked the struggle in FTII was the appointment of Gajendra Chauhan, a faithful fellow traveller of Sangh Parivar and an active member of BJP, as the chairman of Film Society. Though the government is continuously trying to trivialise the issue by saying that it is an ornamental post, the reality is far from this. It is the chairman who should make a dialogue between the government and I&B ministry keeping in mind a progressive vision for the institute.  But Gajendra Chauhan, whose credential is nothing more than acting a role of Yudistara in Mahabharata TV serial and in some B Grade films, neither has such a vision on cinema nor does he have any vision for the institute.

Other than Gajendra Chauhan, four other members in the society Anagha Ghasias, Narendra Pathak, Rahul Solarpurkar and Prancha Saikia have similar qualifications as Gajendra, first and foremost, they have strong RSS backgrounds. According to information accessed by Indian Express through RTI, the original list proposed for FTII council members by the then director D J Narain on December , 2014 to I&B ministry consisted of AR Rahman, Resul Pookkutti (Oscar winner and alumni FTII), Naseruddin Shah (actor and alumni FTII) and Javed Akthar. These names got replaced with  the names of  Anagha Ghasias (notorious film maker having a documentery (!) on Modi to her credit), Narendra Pathak (as per the ABVP Maharashtra page, he is still the state president of ABVP Maharashtra/he was the ABVP president when ABVP lumpens unleashed an attack on FTII students after the screening of Anand Patwardhan’s ‘Ram ke Nam’ in the campus in 2014 ), Rahul Solarpukar (another BJP activist) and Prancha Saikia (office bearer of RSS linked Sanskar Bharati).

The situation emerging in FTII cannot be seen in isolation from what is happening in other educational and cultural institutions under the same regime.  Baldev Sharma, former editor of RSS mouthpiece Panchjanya, was appointed as chairman of the National Book Trust in March this year. Lokesh Chandra, the newly appointed head the Indian Council for Cultural Relations is 87 years old and a Modi bhakt - Modi for him is “the incarnation of God”. No wonder, for him, Modi is a greater leader than Mohandas Karamchand Gandhi. The newly appointed chairman of the Indian Council for Historical Research C Y Sudershan Rao was the head of the Andhra Pradesh chapter of Akhil Bharatiya Itihas Sankalan Yojana (ABISY), a tributary of RSS. This historian was a professor of History in Telangana University earlier and had praised the ‘caste system of India’ in his writings. Proving the historicity of Ramayana and Mahabharata are some among his other favourite agendas. More dangerously, he even gets the ‘feel’ of ‘Ramjanma bhoomi’ while walking through the lanes of Ayodhya.  This appointment was enacted after dissolving the advisory council to ICHR including veteran historians like Romila Thapar and Irfan Habib.  Nuclear scientist Anil Kakodkar resigned from IIT Bombay’s governing body in March 2015, following reports of differences with the HRD minister over the selection of directors for IITs at Ropar, Bhubaneswar and Patna. The Indian Institutes of Management Bill introduced by Modi government is criticised for its mal intention to curb the autonomy of the institute. The eligibility criteria that the candidates for the IIM director posts should clear the group discussions are curbed shamelessly. In an another canny move to abort the updated National Curricular Framework 2005, initiated by Parvin Sinclair, director of NCERT, she was ousted through planned plots. The main intention behind this was to sabotage the last stage of the updating of the NCF 2005. Pahlaj Nihalani, the newly appointed chairperson of the Central Board of Film Certification of India, as part of his job proposes an “umbrella system of censorship” to check “obscenity” and denigration of “Indian Culture”! CBFC has released a list of 28 words which are banned now! Many of the recent appointments at Prasar Bharti also reveal that affiliation to the Sangh is the only criteria considered for appointments.

The act of raiding the campus at mid night and arresting the protesters is once again proving the cowardice of the authorities and the fascist attitude of both state and central government towards any dissent.

MB Rajesh addressing the protest said that the FTII which produced many finest talents of Indian cinema was headed in the past by stalwarts like Shyam Benagal, Mrinal Sen, Adoor Gopalakrishnan, Girish karnad and so on. The appointment of Gajendra Chauhan is another attempt by Modi government to bring the major research and cultural institutions of the country under the complete control of the Sangh Parivar by filling them with their servile ideological henchmen. We have seen changes with the same motive at NBT, ICHR, NCERT, Censer Board etc. We appreciate the students of FTII for their commitment towards this institution and the courage to fight. If the government is not taking action in favor of the demands of the protesting students they will have to face more intensified struggles in coming days, he said.

V Sivadasan said the attempts of the Modi led NDA government to saffronise the cultural and educational institutions of India will be resisted at any cost. He said SFI stands in solidarity with the protesters of the FTII.