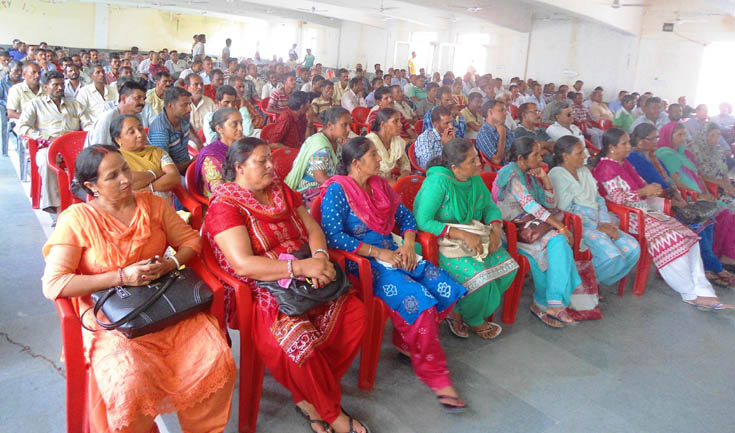 THE working people of the country, from almost all the sectors, from all the states, have very well completed their preparation for the 24 hour strike on September 2.  This strike is the 16th countrywide General Strike after 1991, against the neo-liberal offensive of the ruling classes and the fourth strike since all the 11 Central TUs and also the National Federations have come on a joint platform.

All informations from various corners of the country indicate that most enthusiastic preparations have been there to make the strike a complete success.

All the Central Trade Unions have convened their national level meetings and chalked out programmes for independent and joint campaigns. All the Central Trade Unions have also, according to media reports, held their own organisational meetings at the state level also. Those initiatives have resulted in successful holdings of the state level and sectoral conventions of all the trade unions and federations.

Starting from West Bengal, all the states have organised joint conventions and adopted resolutions calling upon the unions and federations in the state to join the countrywide strike.  National leaders of CTUs have attended these conventions, raising enthusiasm among the delegates participating.

An important development in these conventions is the participation of state level organisations, mostly guided by the regional political parties. These organisations include the trade union wings or guided organisations of Shiv Sena, Telengana Rashtra Samithi, Telugu Desam Party, MDMK, DMDK and VCK in Tamil Nadu and JMM in Jharkhand.  In Kerala all the regional trade unions including those attached to ruling parties in the state have been participating in the countrywide strikes conducted after 2009.  There are also organisations at the state level, not attached to any political parties, but led by individuals or functioning as independent organisations like Working Peoples Council in Tamil Nadu, which are also participating in the strike.

The Convention of Public Sector Employees unions in Bengaluru on July 25 witnessed participation of unions form all over the country.  Unions affiliated to all the major Central Trade Unions and also the Joint Action Front of PSU unions, Bengaluru and PSU Trade Union Co-ordination Committee, Hyderabad participated.  287 delegates from 28 major PSUs attended this convention, which adopted a declaration criticising the Government of India’s policies of privatisation and denigration of PSUs.  Adopting the 12 point charter of demands and also on issues of PSU public sector workers, the convention vowed to make the strike a total success.

CITU affiliated unions along with some of the fraternal unions in the PSUs, had held a meeting in Hyderabad on June 22.  157 delegates from more than 50 units had attended this meeting, which was called by the All India Co-ordination Committee of Public Sector Trade Unions.

State level workshops or conventions were also held in various centers where considerable number of PSUs are operating.

Coal workers, under the leadership of all the major federations held a national convention in Nagpur, on July 11, resolving to make the strike a complete success.  Local and regional conventions were held in different states.

The co-ordination committee of five national federations of port and dock workers met at Paradeep on June 21 to plan out campaigns among the port and dock workers.  Meeting again at Chennai on August 8-9 to review the preparations, the committee decided to direct all the affiliated unions to issue strike notices to the management.  Detailed programme of campaigning was worked out.

BSNL employees who went on a two-day strike with a demand of Save BSNL, are fully prepared for the strike on September 2. All the unions of employees have jointly served strike notice and campaigns have been well organised.

A national convention on August 4 in Mavalankar Hall in New Delhi witnessed participation form all over the country including Arunachal Pradesh and Manipur.  All Central TUs and independent federations form various states participated in the convention which decided to organise successful strike of the road transport workers on September 2.

The National Co-ordination Committee of Electricity Employees and Engineers (NCCOEEE) have been on country wide campaign against the new electricity Bill, which will in effect be a death knell to the demands of electricity as a basic right. Affordable and quality energy to the domestic consumers will come to an end if the new Bill is passed.  NCCOEEE had decided to go on a countrywide strike if the new Bill is introduced in parliament. Though it was listed to be introduced, it could not be introduced in the monsoon session.  Now, the unions have decided to concentrate on the September 2 strike.

Central government employees under the Confederation of Central Government Employees and Workers, is on a countrywide campaign to make the General Strike a powerful day of protest by mobilising all sections of employees – Postal, Income-tax, Audit and Accounts and various departments.

As far as the state government employees are concerned, All India State Government Employees Federation leaders are on tour to mobilise employees for the strike after a formal decision to go for strike was taken on July 11.  State and local level conventions have been organised in various states.

Civilian employees of the defence department are in full preparation for the strike. All India Defence Employees Federation (AIDEF) and the INTUC and BMS led federations have jointly appealed to the workers to go on strike.  Strike ballot was taken by the three federations, independently from August 4-6.

Major unions in banking and insurance sector are, as usual, actively preparing for the strike, which will be a total success on September 2.  Reserve Bank and NABARD will also be on strike.

As has been the tradition, in all the previous struggles, medical representatives under the banner of FMRAI are well prepared in every state to go on strike this time also.

In the anganwadi sector, all the federations have jointly decided to participate in the strike.  ASHA workers, Mid-Day Meal workers, NCLP workers etc are also in the campaign to make the strike a powerful protest against the government’s attitude towards the scheme workers.

The reports reaching from different parts of the country show that enthusiastic campaigns are going on in all the industrial centres in the country.  Organised sector workers, both in public sector and private sector, along with the huge sections of unorganised sector workers, daily wage earners and all sections of toilers are preparing for the strike.

House to house campaigns, panchayat level conventions, torch light processions are being held in different parts of the country with thousands of work spot level meetings with massive participation of men and women.  In many centres, the general strike will turn into a total hartal.

On August 15, we saw countrywide celebrations of the Independence Day.  India has entered the 69th year of Independence.  The lofty goals at the time of the freedom struggle and the dreams of thousands of our martyrs and millions who languished in the jails facing torture and hardships still remain very distant even today.

Our kisans and agricultural workers are on the path of suicides, not able to withstand the blood sucking policies of the ruling class.  Various sections of kisans and agricultural workers are already in struggle.  The distress the Indian villages are facing is the result of the inhuman and exploitative policies being pursued by the rulers.  It is for the working class of the country to be in the forefront of struggles against these policies and give confidence to all other sections of toiling masses in their struggles. The solidarity of all sections of toilers has to be strengthened.

The unity of the trade unions on the basis of an agreed charter and the struggles being conducted have to be developed into a massive struggle against the anti-people, neo-liberal policies.

The countrywide General Strike on September 2 should mark the beginning of a new phase of struggle.  This one day strike will turn into a massive action to warn the ruling class against their policies. We should force a change in the policy trajectory of the country and working people should unitedly move towards that.