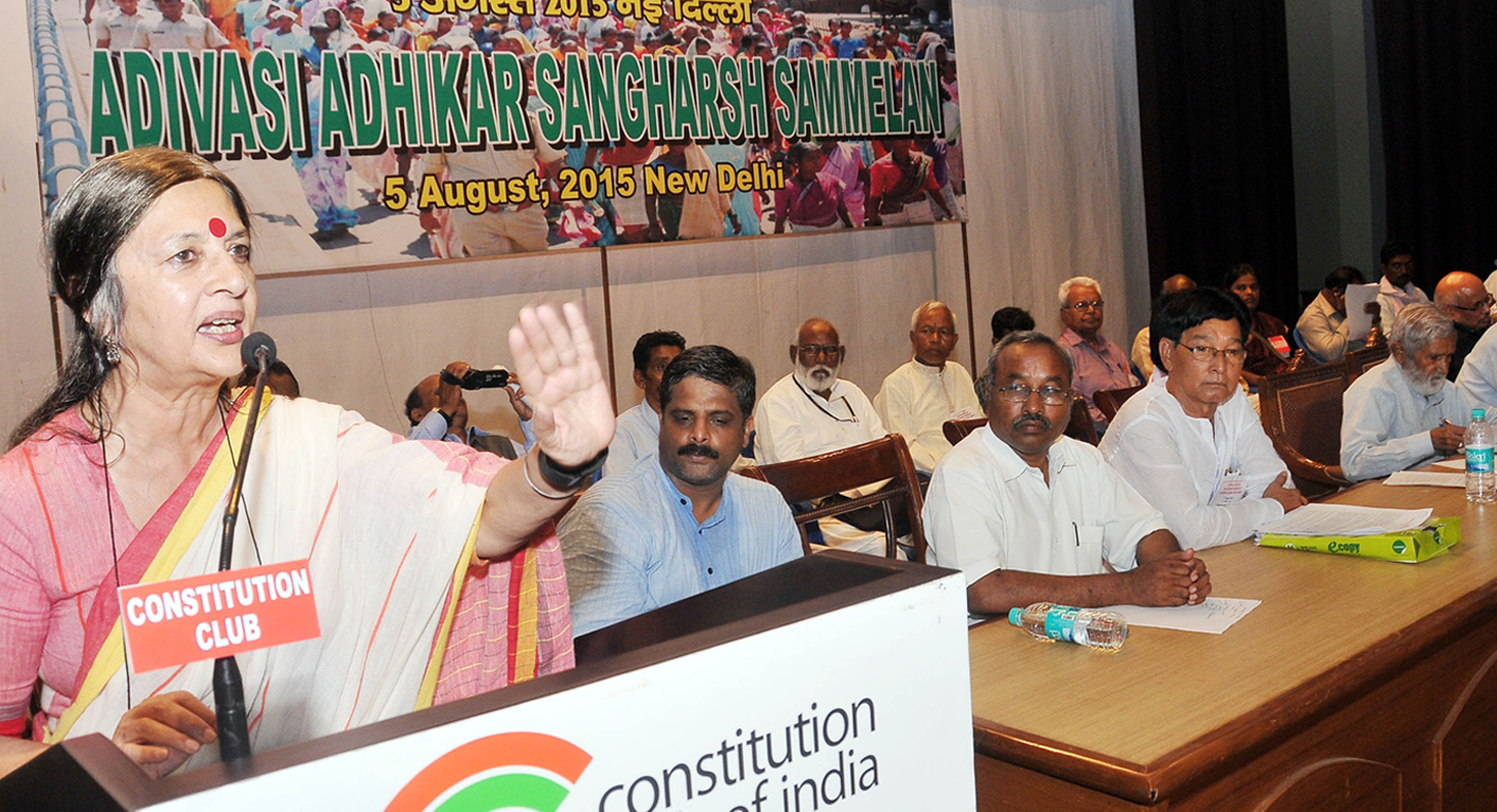 Adivasis from Every Region of the Country Join Hands

To Protest Modi Govt's Attack on their Rights

FOR the first time since the Modi government was elected to power in May 2014, adivasis from across the country assembled at Mavlankar Hall, New Delhi, in the Adivasi Adhikar Sangharsh Sammelan on August 5.
The convention organised jointly by the  Adivasi Adhikar Rashtriya Manch, Akhil Bharatiya Adivasi Mahasabha, Bharat Jan Andolan and Campaign for Survival and Dignity was attended by representatives from more than eighteen states.More than a thousand people gathered in the convention and took out a protest rally subsequently.
Speaker after speaker stressed how the Modi government has consistently sought to undercut the basic rights and entitlements of the adivasis. In the name of "development" and "reforms", the rights of adivasis granted under the Constitution, the Forest Rights Act, the PESA Act and so on, to control their lands and forests are being trampled. They also highlighted that the Scheduled Tribes have received only half of the budgetary allocation that they are entitled to under the Tribal Sub Plan in this year's budget. Adivasi students and youth have been deprived of the schools, hostels and scholarships they are entitled to and all these entitlements have
seen their budgets cut.
The convention was addressed by Dr Virginius Xaxa, chair of the High Level Committee on the Social and Economic Status of Tribals, who attacked the government's violation of adivasis' legal and resource rights and called for a moratorium on land takeovers in adivasi areas until all legislations for adivasi rights are fully implemented. Dr Hrushikesh Panda, former secretary, ministry of tribal affairs (retired in April 2015), addressing the convention talked of how both central and state agencies had violated the Forest Rights Act and connived in the seizure of rights from adivasis. Brinda Karat, CPI(M) Polit Bureau member, called for united protests against the criminal violation of adivasi rights by the NDA government and its continuous attempt to eliminate legal protections for adivasis and to slash their welfare entitlements. She pointed out that adivasis are being imprisoned for defending their rights while corrupt officials roam free; adivasi children in the BJP ruled states like Rajasthan are taught that a rapist like Asaram is a saint while on the other hand, adivasi culture and history are being denigrated and destroyed. The historic role played by legendary fighters like Birsa and Munda against British imperialism is never taught in the school text books, she said. Jitendra Choudhury, MP, Tripura, stressed on the manner in which this government has attacked basic rights that have been won after long struggles.

The convention passed three resolutions – on the issue of consent of adivasis and gram sabhas for mining or other projects, on the issue of Tribal Sub Plan allocations proportionate to the adivasi population and for a law to make it mandatory and third, for the guarantee for education and employment for tribal youth and for reservations in the private sector.

A delegation from the convention also met President Pranab Mukherjee and submitted copies of the three resolutions. The delegation stressed that governors, who are Constitutionally mandated to ensure that tribal rights are protected, have instead been conniving with efforts to violate tribals' rights. The president promised the delegation that he would shortly call a meeting of all the governors to stress the need for them to take action on these issues.