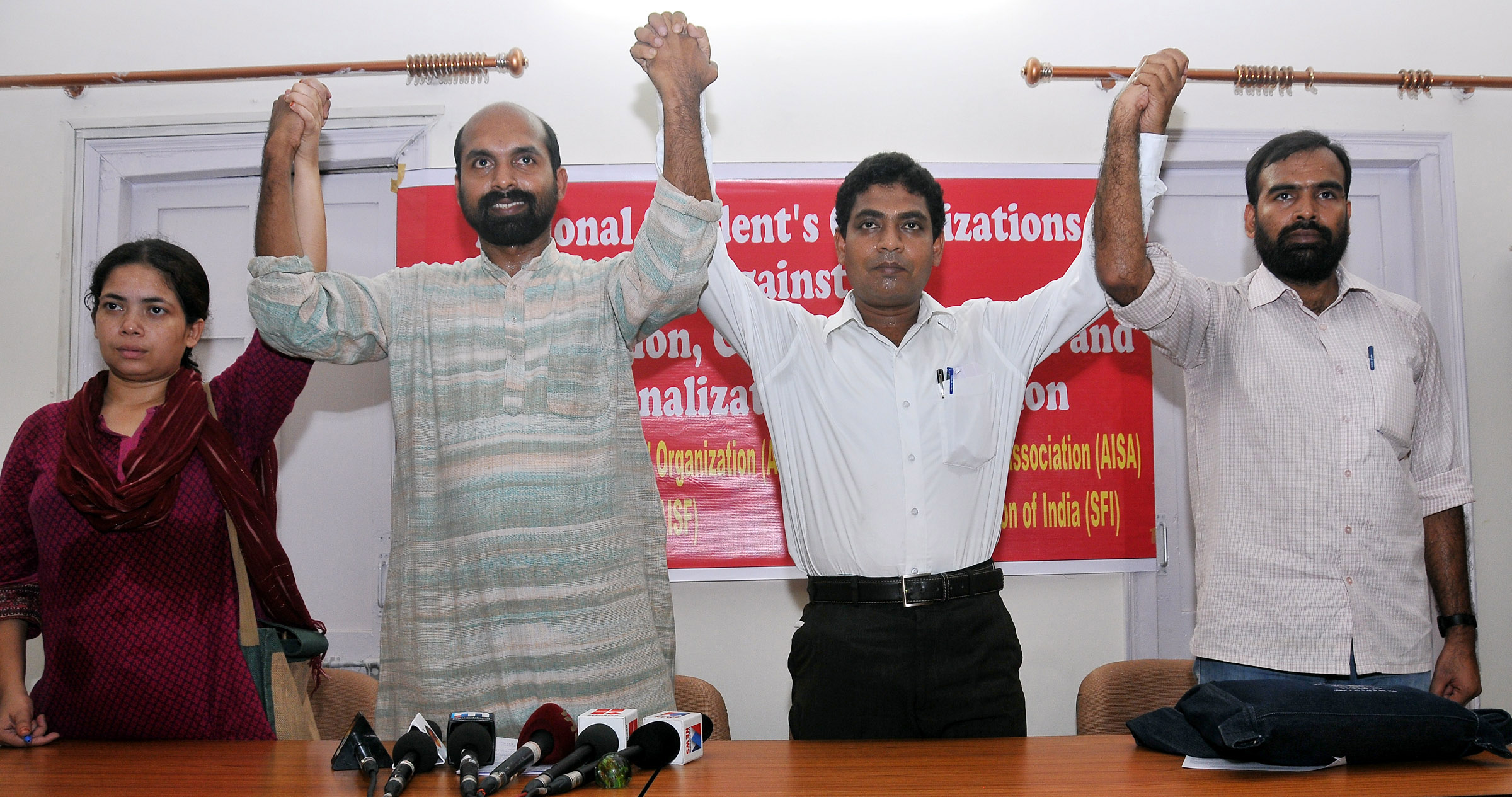 Student Organisations Join Together To Fight Attacks on Education

Four student organisations – SFI, AISF, AISA and AIDSO – have come together to launch a movement at the national level against the centralisation, commercialisation and communalisation of education. In a joint declaration, the organisations said efforts will be made to bring on board students’ organisations and groups at the state, district and campus levels who agree with the basic understanding as outlined in this declaration. Below is the text of the joint declaration:
THE attacks at all levels and in different spheres of education have intensified further in the one year of Modi regime. The policy thrust of centralisation, commercialisation, and privatisation of education, however, is not party-specific, but one that is supported by the entire ruling class to serve its interests. The Modi government’s sinister agenda of saffronisation makes this toxic combination more lethal. Neo-liberal assaults over education on one hand and aggressive communalisation on the other are today greatest threat to our education system.
The Modi government has slashed budgetary allocations for education by 16.5 per cent. It has halved the funds for ICDS, cut funds for mid-day meal schemes and for the Sarva Shiksha Abhiyaan. Funds for higher education have been cut by 29 percent. Thus, even the limited gains of the past are being eliminated. Successive governments have under-funded education, and public funding has stagnated at just 3 per cent of GDP. The failure to expand public investment in education has facilitated the expansion of the private sector at all levels, from nursery school to higher education.
The Right to Education Act has proved to be means of siphoning public funds to private schools and allowing private school managements to hike fees. In the last 5 years since this Act has come into operation, the commercialisation and privatisation of school education across the country has intensified. It has institutionalised the multi-layered school education system and increased the already existing inequalities.
Government schools have been shut down in Rajasthan, Maharashtra and elsewhere to make further way for privatisation of school education. The absence of a statutory requirement that the central government provide the additional resources to ensure the implementation of the Right to Education, combined with the worsening finances of the states, is leading to a catastrophe. The government’s claim that it is transferring more funds to states in the spirit of “cooperative federalism”, while actually slashing allocations for major centrally-sponsored programmes, is characteristic of the crisis. Acute infrastructural shortages, poor student-teacher ratios, cramped classrooms, insufficient hostel facilities, and inadequate laboratory and library facilities characterize all levels of education, from schools to higher educational institutions.
The Rashtriya Uchhtar Shiksha Abhiyaan (RUSA), the Choice Based Credit System (CBCS), and the Common University Act are part of the agenda of privatisation. Centralisation has been used as means to push these agendas. In the recent case of the UGC order to implement CBCS in all universities from the 2015-16 academic session with centralised syllabi allowing only 20 percent deviation is an example of similar approach. CBCS, which is being pushed as an academic system which will give ‘choice’ to the students, will in effect, give choice to only those who have money. The real agenda behind it remains the ruin of public education, so as to create further space for the private sector.
RUSA replaces the pre-existing multiple funding mechanisms with one centralised mechanism. The funding is linked to a set of conditions failing which the institutions/states won’t be eligible to receive funds. These conditions include implementation of Choice Based Credit System (CBCS), semesterisation and compulsory accreditation among others. The same document makes it clear that the funding under RUSA will be norm based as well as performance based. This basically means that the state governments or universities won’t have any room to modify the system according to their specific conditions and all powers to determine their education are snatched away from them. This will go on to increase the already existing inequalities.
Indian government had agreed for ‘Market Access’ in ‘Higher Education Sub-Sector’ to WTO way back in August 2005 as a part of Doha Round Trade Negotiations which started in 2001. These have not yet become ‘commitments’ as the trade negotiations could not be concluded for the last 10 years. But now with a fresh momentum in the negotiations, there are plans to expedite the process of the ongoing trade negotiations in WTO from the coming July and successfully conclude them in the ensuing Tenth Ministerial Conference to be held at Nairobi, Kenya from December 15 to 18 this very year. Since agreeing to WTO rules would also necessarily mean that the Indian government will have to offer ‘level playing field’ to the private and foreign players, as well. The current policy level offensives are intrinsically linked to the preparations for offering this level playing field.
In the last one year, RSS has intervened in a host of educational and cultural bodies like ICHR, ICSSR, NBT and Sahitya Academy. There is a concerted attempt to push the Hindutva agenda in various spheres. Apart from this, the various BJP-led state governments have been tampering the school text books. This has gone hand-in-hand with outfits like ABVP’s planned efforts to communalise the campuses.
The democratic rights of students and teachers are being curbed. Other than a few states, student union elections are not held and students are denied the minimum democratic right to organise. The Lyngdoh Committee recommendations with their stated aim of ensuring the democratic rights of the students have went on to become a tool of depoliticisation on campuses and limiting the fighting capacity of the unions against the adverse ruling class policies. The recent de-recognition order of Ambedkar-Periyar Study Circle in IIT Madras at the behest of MHRD, is only a pointer to the situation of democratic rights under current regime.
It is in this background, that we have come together to launch joint movement on the following issues:

Build pressure on Indian government so that it doesn’t agrees to give ‘market access’ to ‘higher education sub-sector’ in the upcoming Nairobi rounds of WTO-GATS.
No to the trident of CBCS, Semesterisation and RUSA, which have become tools of commodification of education.
Increase public expenditure in education to 6 percent of GDP, 10 percent of central budget and 30 percent of state budgets.
Uphold democratic rights in campuses. Reject the Lyngdoh Committee recommendations. Bring legislation calling for compulsory students’ union elections in all institutions.
Free universal compulsory quality school education and strengthening facilities for preschool
Education.
Replace the RTE in its present form with a new legislation mandating fully public funded school education. In the meanwhile, private schools can’t be given any leverage to deny the mandatory 25% seats for students from economically weaker sections.
Legislation to control fee structure and to ensure equal opportunities for students from socio-economically weaker sections in private institutions.
Stop the entry of foreign universities. No to FDI in education.
Ensure a secular, scientific and democratic educational system. No to any attempt of saffronisation of education.