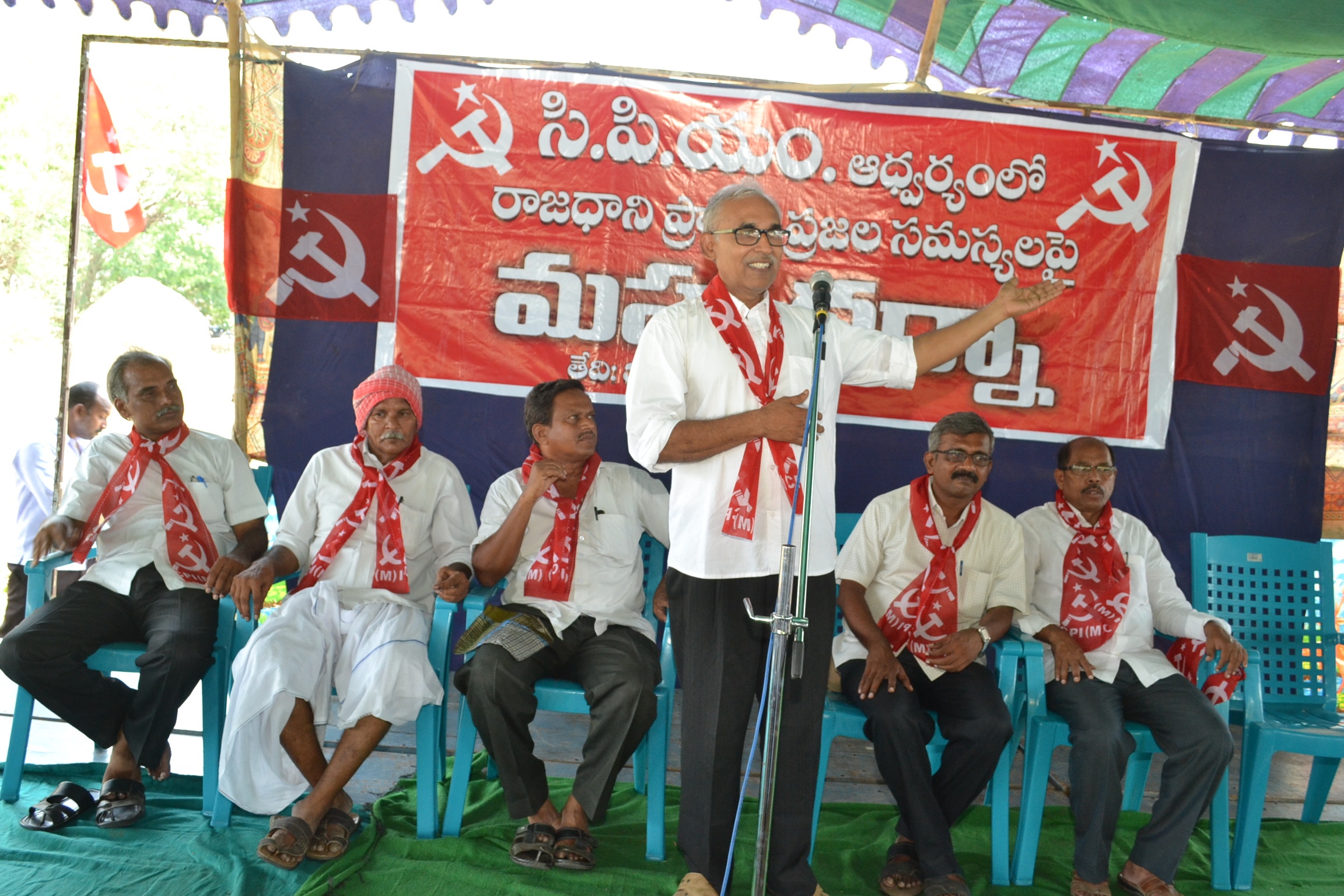 A Corporate Capital City in the Making

THE Andhra Pradesh government has collaborated with the Singapore government in the building of the planned capital city ‘Amaravati’.  Chief Minister Chandrababu Naidu is closely monitoring the collaboration, apart from his regular visits to Singapore. What is unheard of is that this entire process of building the capital city in partnership with foreign companies is resulting in the large-scale displacement of farmers, agricultural labourers and other rural unorganised workers. Naidu’s government is saying that the partnership with Singapore is only limited to preparing a three-phase master plan for the capital region. But this claim is far from reality. Recently while handing over the Capital City Master plan to Chief Minister Naidu, Singapore Minister Eswaran openly stated the willingness of Singapore companies to take part in the building process of the capital city.

INNOVATIVE LOOT
CALLED LPS
The TDP government is planning to construct the first phase of the capital in 50,000 acres. For this, the government wants to acquire an unimaginable 33,000 acres of agricultural land from the farmers for the new capital city. The proposed site of the capital city is also very controversial. Chandrababu chose the most fertile agricultural land of the state on the southern banks of the river Krishna. Not only the scale and quality of the selected land but the procedure adopted to acquire this land needs a public scrutiny. To bypass the Land Acquisition Act, the state government formulated a Land Pooling Scheme (LPS) to acquire the said 33,000 acres.  For every acre acquired, the government will give up to 1000 square yards of residential and 300 square yards of commercial land to the farmers, in the proposed city. Apart from this land, farmers will get a compensation upto Rs 50,000 per annum for a period of 10 years. To implement this scheme, the government has constituted a ‘Capital Region Development Authority (CRDA)’ under the APCRDA Act. The proposed capital region is extended to both sides of the river Krishna, comprising parts of Guntur and Krishna districts. The proposed capital city, Amaravati comprises 29 villages of Guntur district. Two cabinet rank ministers have been stationed in these villages for the last five months to convince the farmers for the land pooling scheme. The government has spared no effort to sell the LPS to the farmers, who are mostly TDP supporters, and successfully created illusions on the prospects of the proposed capital city. Initially, the government got the in principle approval of farmers for around 33,000 acres. As the time progressed several farmers smelled the dangers of the LPS and went back from the in principle approval. Till date, the government has got final approval of the farmers for 16,000 acres only. Remaining farmers, who own the rest of 17,000 acres, are now declining to give the final approval. Some of them have even gone to the High Court, opposing the LPS, and the court ordered in favour of the farmers and asked the state government to allow the farmers to cultivate their lands. In this background, the Chandrababu Naidu government issued a GO for forcible land acquisition based on the controversial Land Acquisition Ordinance of the Modi government. Now the government is threatening the farmers with this GO and pressurising them to agree for the LPS. On the other hand, farmers are slowly realising the consequences of the LPS. Initially, the government assured the farmers that they will get the residential and commercial land in their village itself. But later, Chandrababu made it clear that land will be given to the farmers only after considering the beautification aspects of the capital city. These flip-flops and the land acquisition GO have raised several concerns among the farmers. More interestingly, the recent Capital City Master Plan submitted by the Singapore government does not earmark any land that needs to be given, where as it promptly marked the parks, water bodies, golf course, cricket stadium etc.

SOCIAL JUSTICE
UNDER THE CARPET
The most affected people of this proposed capital city are land tillers, agricultural labourers, artisans and rural unorganised workers. Initially, the government did not speak a word about these marginalised sections of people.  After the Left and other streams raised voice, the government proposed a pension of Rs 2,500 per month per house hold (entire family).  As it is a fertile land and can produce around 120 varieties of crops throughout the year, every agricultural labourer gets between Rs 6,000 to 9,000. If there are three working members in the family, they used to get an income of Rs 15,000 on an average. But the learned leaders from the Chandrababu government fixed a monthly compensation of Rs 2,500.  Now, the agricultural season has come to an end and the government has banned any fresh farming in these villages. Hence, the real problem for these sections of the people has already started. The majority of the people who belong to these sections are deprived of any work now. With the announcement of the planned capital, their lives are literally in the midst of a storm now. Even banks are denying loans to them, highlighting the fact that they don’t have any jobs. As farming comes to a close, traditional lenders like rich farmers are also showing the door to them.  And the plight of other artisans, rural working class is no different from this.  Ultimately all these sections of people are forced to evict from their home lands.

COMPANY TO RULE
THE CAPITAL CITY
In his last tenure, Chandrababu Naidu had proclaimed himself as the CEO of Andhra Pradesh. Now he is utilising the opportunity of building a planned capital city to implement the World Bank-IMF advocated policies. Recently, the government issued GO 109, 110, through which it proposed to set up ‘Capital City Development and Management Company’ (CCDMC) under Companies Act. The government has authorised this company to give the pooled agricultural lands to private companies on lease for a period of up to 99 years. This one proposal is enough to understand the dynamics of the proposed capital. Not only this, practically it will be the local government in the new capital city as per the guidelines given to this company. Apart from collecting the user charges, development charges,   this company is responsible for providing health, education and other facilities in partnership with the private companies. And this body will be governed by board of directors, not surprisingly the board will have four industrialists as its directors.

TOWARDS A
STRONG RESISTANCE
As the illusions were high, initially there were only a few takers for the opposition mounted by the CPI (M) to this proposed corporate capital city. Day-by-day, the discontent is growing among the local people, particularly among the weaker sections. From the beginning, CPI(M) has highlighted and opposed the dangers of this ‘Corporate Capital’. The Party has organised round table meetings with several stakeholders and intellectuals on these dangers. On May 31, CPI(M)  organised a mass dharna in the proposed capital city area, at Undavalli village. Hundreds of farmers, agricultural workers attended the dharna, which was addressed by Party Polit Bureau member BV Raghavulu. Criticising the government’s attitude towards farmers and workers, he termed the entire exercise of the capital building as a “Big Land Scam”.  He lambasted the Chandrababu Naidu government for its efforts to build a pro-rich, anti-people capital, the  sacrifices of thousands of farmers and workers being the pillars of the capital. He demanded that the government should immediately mark the land that needs to be given to the farmers, in the master plan and it should implement ‘Buy Back Policy’ to assure minimum monetary returns to the farmers. Raghavulu also demanded that the government should give jobs to at least one person from all the families. Party state secretariat member Ch Baburao explained the dangerous motives of the government behind setting up of the CCDMC. Recently, the Party has formed a co-ordination committee for the entire CRDA region to take forward these struggles.