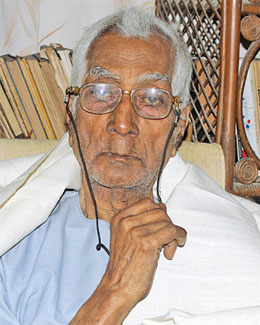 AMALENDU Guha who passed away on May 7 in Guwahati, was an outstanding Marxist intellectual of the country. He remained a life-long Communist, though his activist years were from 1943 to 1965. In 1962 when there was large-scale repression against Communists, he was incarcerated in Berhampore jail in Orissa where his co-inmates included Achintya Bhattacharya (one-time state secretary of the CPI(M) in Assam), Biresh Misra (one-time state secretary of the undivided Party in Assam), and Bishnu Prasad Rabha the legendary revolutionary poet of the state. They had celebrated Rabha’s birthday for the first time in jail; now it has become a major annual literary-cultural event in Assam.

Guha was born in 1924 in Imphal where his father had been a school teacher. After early schooling in Imphal he had migrated to Guwahati where he completed his High School and Intermediate Arts examinations. His brilliant academic performance (he had stood fourth in IA examination of the Calcutta University whose jurisdiction then extended over the whole of the east and north-east) had earned him a scholarship to Presidency College, Calcutta. After passing out from Presidency he had got a teaching job in Tezpur, until another scholarship had enabled him to complete his Ph.D from the Indian School of International Studies, New Delhi, though his viva voce examination had been delayed by his incarceration. Subsequently, he had taught for many years at the Gokhale Institute of Politics and Economics, Pune, and at the Centre for the Study of Social Sciences, Calcutta, before going back to Guwahati upon his retirement.

Amalendu Guha’s training had been in several disciplines – economics, history and political science, but the core of his interest was social history. His book Planter Raj to Swaraj was a landmark study of the socio-economic history of Assam which left an indelible imprint on generations of Assamese scholars, including even those involved in the AASU movement, of which Guha himself had been very strongly critical. It was in the context of this movement that Guha had developed his ideas on the nationality question, which to my mind constitute an original contribution to the corpus of Marxist theory.

Amalendu Guha’s writings were not just confined to the sphere of academic research. He was also a considerable poet in both Bengali and Assamese. He was a member of the advisory editorial board of Social Scientist. His loss is an irreparable one for the cultural-intellectual life of the country, and of Assam in particular.