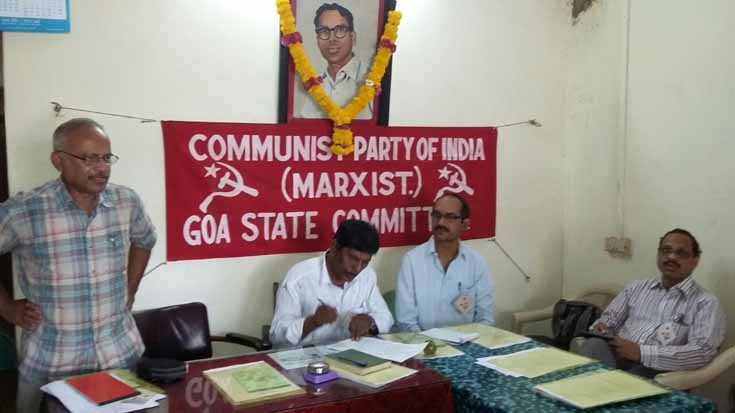 THE 16th Goa state conference of the Communist Party of India (Marxist) was successfully held at Vasco-da-Gama on March 29, 2015, with a call for strengthening the Party and building up a Left and Democratic Front in Goa.

25 delegates working in six branches in the trade union, kisan, lawyers and intellectuals fronts, congregated at the Comrade Gopinath Waman Rao Manch named after the late founder member of the Party in Goa who passed away just after the last state conference.

The Red Flag was hoisted by veteran leader of the Party in Goa Comrade Suresh S Naik. Recalling the innumerable sacrifices made by countless number of working people all over the world in various struggles, Naik exhorted the delegates to live up to the ideals of Communism steadfastly. He drew attention to the fact that even this day, hundreds of our Party activists and sympathisers are being targeted, harassed and even killed in West Bengal, Kerala and elsewhere in India for standing up for their rights with the Red Flag in hand.

After paying floral tributes at the specially erected Martyrs Column, the session began with election of a three member presidium comprised of Jatin Naik, Kamalakant Gadekar and Victor Savio Braganza. Formal resolutions were adopted paying homage to the martyrs and condoling the demise of various stalwart leaders of the Communist and democratic movement in India and elsewhere.

Vivek Monteiro then formally inaugurated the conference. He pointed out that when we last met in January 2012 at the 15th Goa state conference, the centre was ruled by the UPA-II and Goa was ruled by the Congress-led coalition. Today there is a sea change with a BJP-led coalition in power in Goa since March 2012 and the Narendra Modi government at the centre since May 2014. There is a clear and present danger of the Constitutional ideals being subverted by displacing the labour welfare laws, enacting land grab ordinances, and pushing forward various communal and divisive laws. Moves are afoot to disband the PDS and the MGNREGA. The hue and cry about bringing back black money has now become less than a whisper. Only those who can afford to wear Rs Ten lakh worth suits seem to have found their Achhe din, he said. The wealth of just one particular big business house in India has grown by Rs 27,000 crores within the last one year, he pointed out. At the same time, various national assets are being offered for a song to the big corporates for looting and plundering as per their wishes. To break the united resistance, the BJP, RSS and their other frontal organisations are actively fomenting communal and caste sentiments throughout India. Progressive intellectuals like Dr Narendra Dhabolkar and Comrade Govind Pansare have been assassinated by these same forces. At the same time, the victory of the AAP in the recently held Delhi Assembly elections shows that this right wing offensive can be checkmated through democratic methods. The issue therefore is how to strengthen our Party so as to be able to discharge its historical role. He said that we should draw appropriate lessons from the Panaji Assembly bye-elections for the building up of a secular, Left and democratic force in Goa.

State secretary Thalmann Pereira then placed the political-organizational work report of the state committee before the conference. The report analysed the important political developments in Goa since the last state conference and also the various struggles of different sections of the working people of Goa. The report noted that the growing economic crisis of the capitalist–landlord path of development has brought various sections of the people in Goa into conflict with the BJP. Further, while prior to May 2014 this protest of the people was muted, after May 2014 the protest is growing in volume and spread. This protest is mainly by the hitherto unorganised sections of the working people who come from bahujan, dalit, tribal or minority sections of the society. The report noted that our Party has been able to work steadfastly with this growing protest and resistance, despite our meagre resources, amidst the fast changing political situation.

The conference then elected a new 14-member state organising committee with a 5-member state secretariat comprising of Thalmann P Pereira, Suresh S Naik, Naresh K Shigaonkar, Kamalakant K Gadekar and Jatin R Naik. The conference also adopted the proposal to have some more young and upcoming comrades as permanent invitees to the state committee meetings.  The conference then elected one delegate and one alternate delegate to the forthcoming 21st Party Congress to be held in Visakhapatnam.

The credentials report of the conference revealed that 9 delegates belonged to the less than 45 age group, while 13 delegates had joined the Party in the last ten years. This relatively youthful composition was matched by a figure of 11 delegates having educational qualification of post-SSC and above.

The conference concluded with the passionate singing of the Hindi version of the Internationale, and slogans.