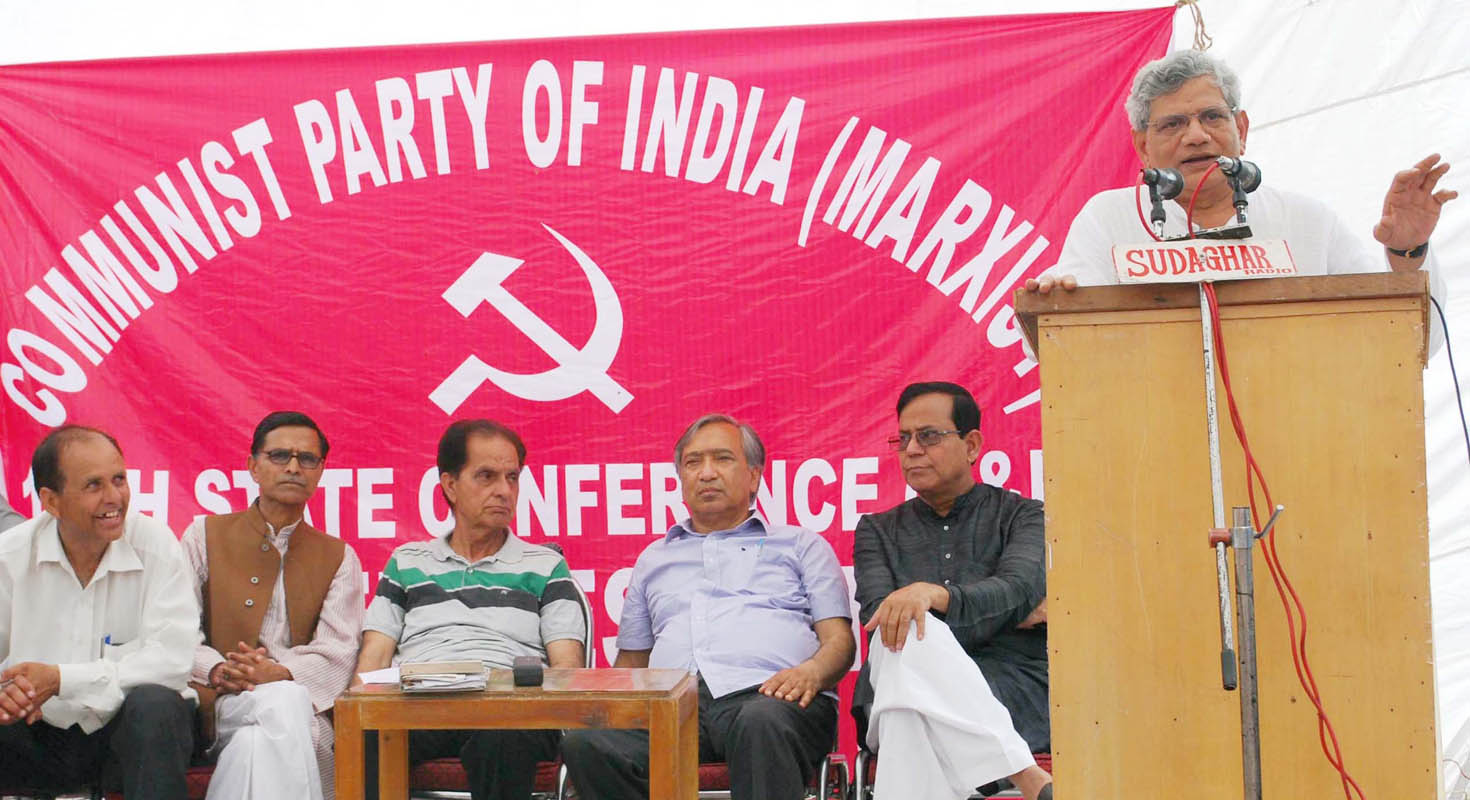 ON the eve of the 10th state conference of the Jammu and Kashmir CPI(M) committee, a public rally attended by thousands of participants with red flags in their hands,  was held at Jammu which was presided over by Sham Prasad Kesar, senior leader of the Party in the state.  Sitaram Yechury, CPI(M) Polit Bureau member and MP, Mohd Saleem, Central Committee member and MP and MY Tarigami, state secretary of the Party and MLA, were among others who addressed the rally.

Sitaram Yechury, while addressing the rally said that the Party has been playing an important role at the national level to thwart the anti-people policies of the Modi government. CPI(M) took foremost part in leading a 14 party delegation in the form of “Paidal march” from Parliament House to Rashtrapati Bhawan against the ordinance on Land Acquisition Act.  He said that the Modi mantra that “Ache din Aane walay hain” stands exposed before the people of the country as nothing good has happened in the last 10 months for the people. On the contrary, the policies of the BJP led government benefit the MNCs and corporate houses of the country.  Ministers and MPs of the ruling party have been spreading venom against religious minorities since the formation of this government in May 2014, which is likely to cause havoc for the national unity and integrity. He questioned the criminal silence of the prime minister over the issue and added  that vandalisation of nine churches in the last week has exposed the claims of the government that it will go to any extent to safeguard the rights of the religious minorities in the country. Under the given situation it is the prime responsibility of the CPI(M) to unite the Left and other secular-democratic forces to defeat these communal and parochial designs of the Sangh Parivar so that national unity, communal harmony and brotherhood is maintained at all costs.

Addressing the rally, Mohd Saleem said that neo-liberal economic policies have played havoc in the country since the days of its implementation in the 1990’s. He lamented that in the last Lok Sabha elections, the BJP has used the communal card to the hilt coupled with false promises of development but the ten months of performance of the government reveals that the MNCs and corporate houses of the country have immensely benefitted at the cost of general poor masses. The interests of these big business houses were taken care of by the present Modi dispensation by mortgaging the huge natural resources and public sector shares were sold to them at throw away prices.  Addressing the rally, G N Malik senior leader of the Party said that farmers and apple growers have suffered huge losses due to the recent devastating floods and nothing has been done by the government to provide relief to this section of the society.  He demanded that this vulnerable section of the society be compensated comprehensively, adding that the agriculture inputs especially fertilizers, pesticides and fungicides be provided through co-operatives so that the quality is maintained.  Sham Prasad Kesar, senior leader of the Party, said that the coalition government must implement the promises made in the Common Minimum Programme (CMP) to give relief to the people of the state.  He underlined the need for covering scheme workers like ASHAs, Anganwadi and Mid day meal workers under the social security net.  Om Prakash, senior leader of the Party demanded enhancement of minimum wages to the extent of Rs15000 per month in favour of workforce in the state keeping in view the present price escalation.

Addressing the rally, senior leader of CPI(M) and MLA,  Mohammad Yousuf Tarigami said that the government is on a public scanner and now is the time for performing on the ground as our people have suffered on various fronts, particularly due to recent floods and they need to be rehabilitated on a war footing.  The coalition government must fulfill the promises made in the CMP and should not waste time in mere rhetoric, he stated.  He stressed that a comprehensive plan needs to be formulated for tackling alarming unemployment situation, enhancement of social security measures in favour of ASHAs, Anganwadi workers/helpers, workers in unorganised sector.

The delegate session of the 10th state conference of the CPI(M) at Jammu started with the flag hoisting by senior party leader, Abdul Hamid Wani. A three member presidium consisting of G N Malik as convenor, Sham Prasad Kesar and Mohd Maqbool Ganaie as its members was elected to conduct the proceedings of the session.

While inaugurating the conference, Sitaram Yechury said that the formation of the PDP-BJP government in the state is not based on principles and the only binding force of this coalition seems to be the hunger and greed for power sharing.  He continued that now that the government has been formed on the Common Minimum Programme (CMP), it should concentrate on implementing the promises made in it, so that the people who have been badly suffering particularly after the devastating floods, get some relief. Under these circumstances, the CPI(M) has to play a responsible role in uniting the people of the state and other secular-democratic political forces to pressurise the coalition government to execute the promises made in the CMP, he said.

200 delegates from different districts of the state participated in the conference.  19 comrades took part in the discussion on the political resolution and political-organisational report.

The political resolution presented in the conference urged upon the government of India to take bold initiatives and enter into a serious and result-oriented dialogue with Pakistan for resolving all issues including the most contentious issue ie, Kashmir.  Both the governments must give up maximalist attitude and try to come to an understanding which can help to reach a workable solution to this long pending vexed problem. Everybody must realise that much time and human resources have been wasted and people subjected to huge sufferings due to the delay in finding out acceptable solution to this problem.  Does this attitude serve anybody in the region? The answer is – it has only aggravated the day-to-day problems of the common people in the whole region, while as the issues of livelihood and other pressing demands of the population are mounting more and more and resources are spent on arms and defence purposes.  It will be in the interest of the whole population in the region and the respective leadership of two countries to give up rigidities and initiate a purposeful process which can lead to minimising differences and help in identifying the areas of agreement.  The CPI(M) has been firmly demanding that the government of India  must restore the eroded autonomy of J&K and within the ambit of the united state, each region of Jammu, Kashmir and Ladakh  must be provided regional autonomy.  Any delay in this process and any attempt to divide the state on religious lines is fraught with dangerous consequences.  The resolution, after accepting few amendments from the delegates, was unanimously adopted.

The conference adopted resolutions on rehabilitation of flood victims, universalisaton of public distribution system, on agriculture/horticulture, against unemployment, price rise, privatisation of power sector, on migrants, on democratic and trade union rights, on communalism and on scheme workers.