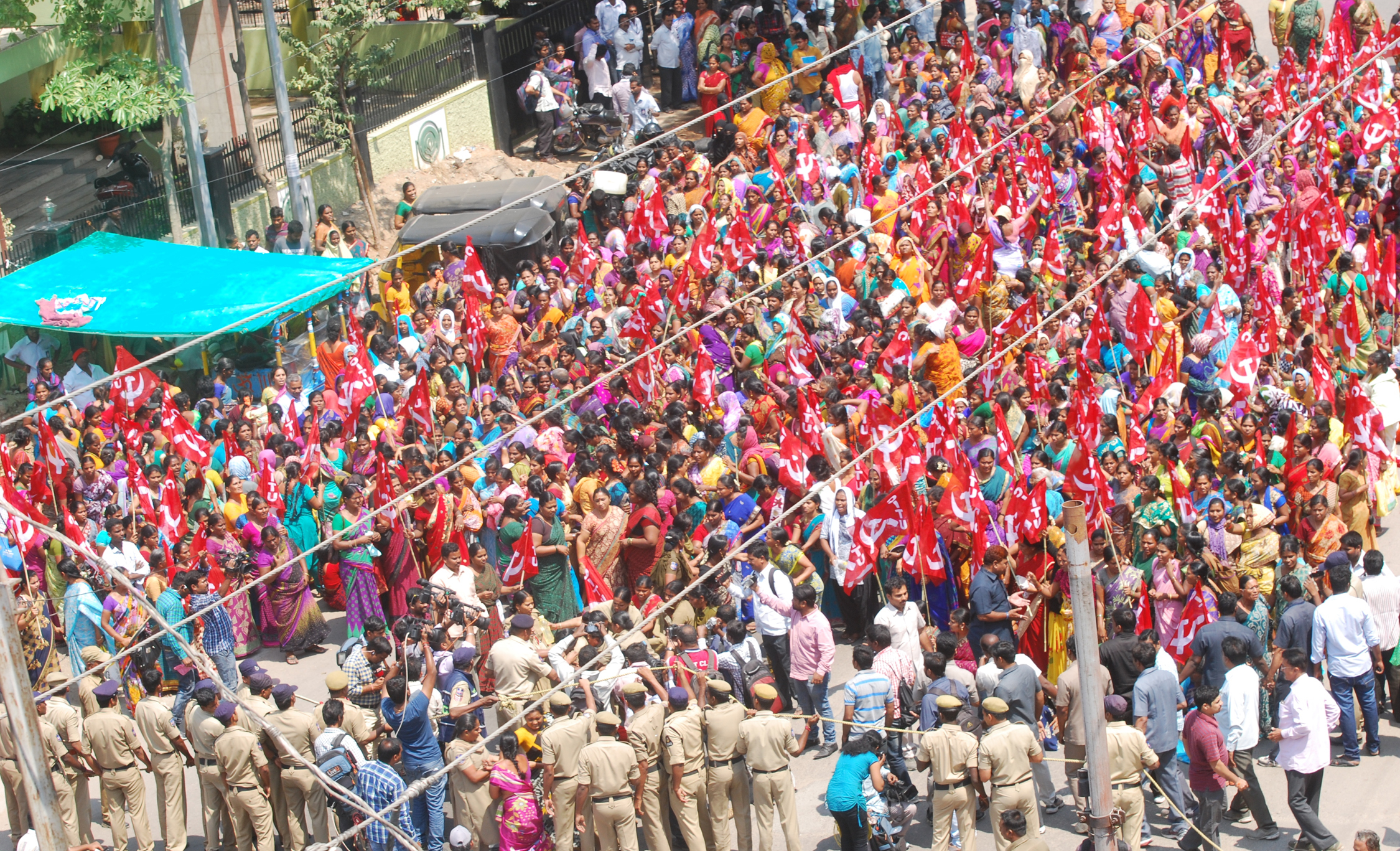 THE anganwadi workers scored an emphatic victory over the unwilling Andhra Pradesh state   government after their spirited struggle in the heart of Hyderabad. Thousands of anganwadi workers from Andhra Pradesh marched on the streets of Hyderabad braving severe repression let loose on them by the Telugu Desam government. The anganwadi workers were protesting against the anti-people and anti-worker policies of the Modi led NDA government at the centre and Chandrababu led TDP government in the state. More than 1,00,000 workers and helpers  across the state took part in the protest activities. The anganwadi workers and helpers were arrested and intimidated in many districts in AP.  But they remained undeterred in their strong spirit to participate in the ‘Chalo Assembly’ programme, against all odds. Police arrested the workers as soon as they got down from the trains, at Secunderabad and Nampally railway stations; at bus stands and shifted them to various police stations. The number of arrested workers was so huge, that the police could not keep them in the police stations, and had to put them in private function halls.

The anganwadi workers and helpers from 13 districts of Andhra Pradesh reached Hyderabad carrying red banners and raising slogans against the central and state governments. The police tried to block the procession but the workers were determined to go ahead. The police resorted to lathi charge to disperse the workers in which many workers were injured. Many workers fainted due to scuffle with the police.

There was a huge rally from MB Bhavan to RTC Crossroads en route to Indira Park which was stopped by police. They attacked the anganwadi workers in the rally with fisticuffs and lathis.  P Roja, AP state secretary of Anganwadi Workers and Helpers Federation was dragged by the police into a van along with scores of workers. Some of the women received minor injuries and some fainted due to exertion. Even Geyanand, member of legislative council, was not spared from this attack. Geyanand, Rama Devi from AIDWA, Swarupa Rani from CITU were arrested by the police. The police did not even allow the agitating workers to stage a dharna at Indira Park. This forced the women workers to squat in the middle of the road at RTC Crossroads. The militant rasta roko by this human sea forced the traffic into a standstill for about one and half hours. Such was the collective fury of this massive gathering of women.

The anganwadi workers have been conducting struggles for the past few months demanding the implementation of the written assurances given to them at the time of their 13-day strike in 2013. Their major demands include: the recognition of anganwadi workers and helpers as government employees; they should be covered under the Minimum Wage Act; minimum monthly wage; retirement benefits and implementation of earlier assurances by the state government.

Presently in the state of Andhra Pradesh, a paltry amount of Rs 4200 to worker and Rs 2200 to helper is paid as honorarium. Wonder what is the honour in it? Their working hours have been increased and they work from from 9 am to 4 pm, and even beyond on occasions. Apart from the assigned jobs, they have had to undertake DLO, ISR survey jobs after completing their regular responsibilities. Harassment and victimisation from the political leaders is severe as the peoples representatives of the ruling party want to fill these posts with their own people. The state government has also annulled the old age pension payable to anganwadi workers on attaining 65 years of age.

The Telugu Desam party in its election manifesto has assured to hike the remuneration paid to anganwadi workers. Soon after coming to power, the Chandrababu Naidu government has once again embraced the much discredited World Bank policies. This government has reneged all its promises to scheme workers and started a witch hunt on them.

Recently, the Telangana and the Andhra Pradesh state governments have hiked the salaries of state government employees to the extent of 43 percent. The Telangana government has also revised the honorarium of anganwadi Workers to Rs 7500 from Rs 4200 and Rs 5000 to helpers from Rs 2200. The AP budget proposals for 2015-16 have provided a raw deal to all scheme workers and anganwadi workers in particular. The state budget has belied all the hopes of anganwadi workers who expected a modicum of solace in it.

P Madhu, CPI(M) state secretary, wrote a letter to the chief minister demanding an immediate settlement of the pending issues of  anganwadi workers.

In spite of a number of representations from  different levels – political as well as administrative – the government continued to remain indifferent to the issues of anganwadi workers. Therefore, the state committees of the CITU and the AITUC had decided to organise a ‘Chalo Hyderabad’ on March 17. On the 16th, an indefinite hunger strike demanding immediate implementation of the demands was organised in which, and  Gaffoor, state president and general secretary of CITU, along with leaders of the anganwadi union, and AITUC leaders participated. This programme was foiled by the police on the same day and they arrested the leaders. The leaders had continued the hunger strike inside the police station and the Gandhi Hospital, where they were shifted to. Sensing the ire of the agitating workers, the AP state government saw to it that the permission for ‘Chalo Assembly’ was denied by the Telangana govenment.

All sorts of repressive measures were unleashed on the anganwadi workers to crush the agitation. The family members including the old aged parents of the anganwadi workers were also taken into custody by the police. Bind over cases were foisted on some of the activists. Leaders of CITU, AIDWA, CPI(M) were arrested from their houses itself in the name of preventive custody. M Krishna Murthy, CPI(M) state secretariat member was also frisked away by the police. The police authorities in various districts threatened the family members of the agitating workers with dire consequences. Some of the anganwadi workers were detained in the police stations up to midnight. They were released only after bitter struggle and dharna by the CPI(M) and CITU activists in front of the police stations.

Even the cadres of the CPI(M), who were in the door-to-door campaign for fund collection for the Party Congress to be held at , were also detained at Vijayanagaram. They were let off only after a massive dharna in front of the police station. In various parts of the AP state, anganwadi workers were prevented from traveling to Hyderabad saying that there was no permission for ‘Chalo Assembly’. Unprecedented searches were made in trains and buses, to prevent anganwadi workers from going to Hyderabad, as if they are carrying explosives. The police in various centres resorted to lathicharge and used additional force at various places to stop the workers from organising human chains, dharnas etc. The whole intention of the government was to terrorise the anganwadi workers into submission. But, the state government failed in their attempts. In all the 13 districts, large scale demonstrations, dharnas, rasta rokos were organised against the repression of the government on anganwadi workers.

The all-out attack on anganwadi workers could not deter their steel resolve to converge at Hyderabad.

The repression against anganwadi workers and their arrests also rocked the two houses of AP legislature on March 17. YSRCP MLAs stalled the assembly proceedings, condemning the high handed attitude of the state government towards the women workers. In AP Council, PDF MLCs along with the Congress and YSRCP MLCs trooped into the well of the house and demanded a discussion on it.

Sensing that this agitation is in full throttle, the TDP government decided to negotiate with the agitating workers. In an unusual manner, Chandrababu Naidu himself had discussed with the delegation of the anganwadi workers union led by Geyanand, MLC and P Roja, secretary, AP State Anganwadi Workers and Helpers Union, and others and he assured them that their issues will be addressed at the earliest.

It was only after this that it was decided to conclude the struggle. The struggle ended for now, but the anganwadi workers remain resolved in their spirit. If the government backtracks on the assurances, it is sure to witness the backlash of the workers with higher and renewed intensity.