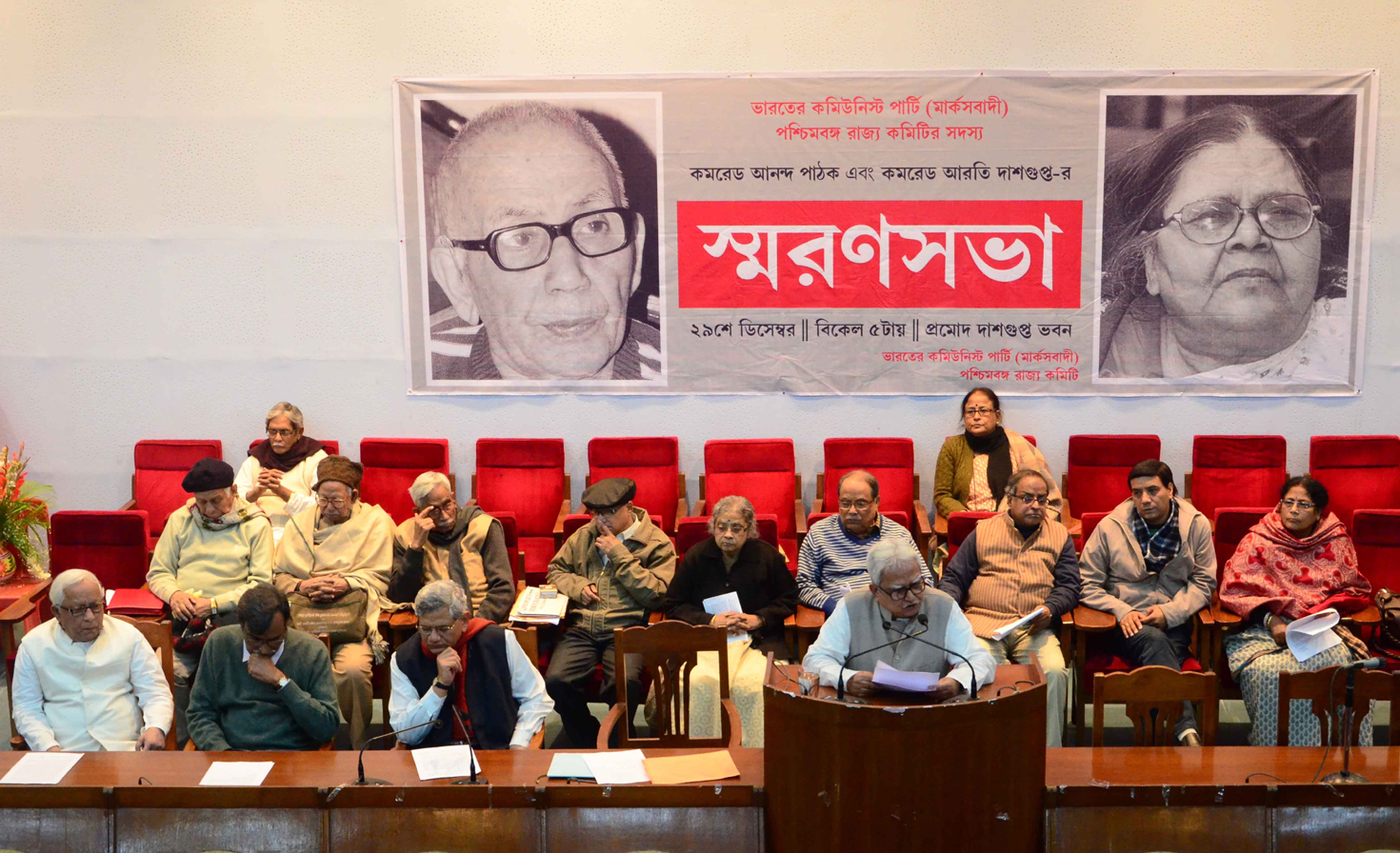 RICH tributes were paid to Comrade Ananda Pathak and Comrade Arati Dasguta, frontline leaders of working class movement and CPI(M), in a condolence meeting on December 29 at Kolkata. Both of them breathed their last on November 28.

The meeting, presided over by Biman Basu particularly remembered their contribution to the development of working class movement in the state. Dipak Dasgupta, CITU state secretary and Ashok Bhattacharya, state committee member of the Party outlined the lifelong struggle of these veteran leaders.

Comrade Ananda Pathak, former Central Committee member of the Party was one of the early leaders of the communist movement in Darjeeling hills. He started his political life under the leadership of legendary communist leader Ratanlal Bramhan and organised tea garden workers. It was extremely difficult, both for geographical nature of the terrain and near-feudal domination of the garden owners, to organise trade unions. Comrade Ananda Pathak, along with others, successfully build up Darjeeling Chia Kaman Majdoor Union, which he served as secretary and president for long. He was also instrumental in organising other sections of Nepali speaking workers and on the basis of that a powerful Communist party.

Comrade Ananda Pathak, as speakers mentioned in the meeting, was very sensitive about the nationality question from the beginning and emphasized on class identities while championing the democratic aspirations of the Nepali speaking people. He was elected to state assembly in 1971, to Rajya Sabha in 1977, to Lok Sabha in 1980, 1984, and 1989 and became the voice of the people of the hills. It was he who strongly raised the demand of inclusion of Nepali language in the eighth schedule of the constitution and local self government in Darjeeling.  Later, he had to fight a bitter battle against the secessionist forces in the hills. He was physically attacked, his house was burnt and he had to leave the hills for uncompromisingly propagating the ideals of class unity. Comrade Ananda Pathak contributed greatly in realizing the Darjeeling Gorkha Hill Council, which was established by Left Front government as a form of regional autonomy.

Biman Basu and Ashok Bhattacharya mentioned in their speech how Comrade Ananda Pathak refused to cow down before adventurist deviations in 1960s and chauvinistic digression in 1980-1990s. He served for a long time as secretary of CPI(M) Darjeeling district committee and became the symbol of the unity of the people of the hills and planes in turbulent times.

Comrade Arati Dasgupta left a very comfortable life to plunge into the working class movement. She studied in the UK and joined in the workers organisations there. Upon returning to India, she along with her husband, Comrade Biplab Dasgupta, who later became a Central Committee member of the CPI(M), dedicated themselves to the cause of mass movement.

Comrade Arati Dasgupta was a leading organiser in various fields of working class movement as CITU leader. She was associated with jute workers’ movement, bidi workers’ union, and movements of construction workers, ICDS and mid-day meal workers. Dipak Dasgupta underlined that she was the chief motivator for bringing women workers into the trade union movement. It was due to her spirited actions, larger numbers of women were mobilised in the working class movement. Through deep study and very close association with workers, Comrade Arati Dasgupta contributed greatly in formulating policies of the CITU. She was state vice president of the organisation as well as all India secretariat member.

Both of these departed leaders had a common trait, the speakers pointed out with reverence. They lived very simple life, were readily acceptable to the toiling people and were untiring in their efforts.

Biman Basu called upon the activists to take the oath to steadfastly defend the unity of the people in the face of divisive politics and thus carry on the struggle of the departed leaders.

In the condolence meeting, Buddhadeb Bhattacharjee, Sitaram Yechury and Suryakanta Misra were present among others.