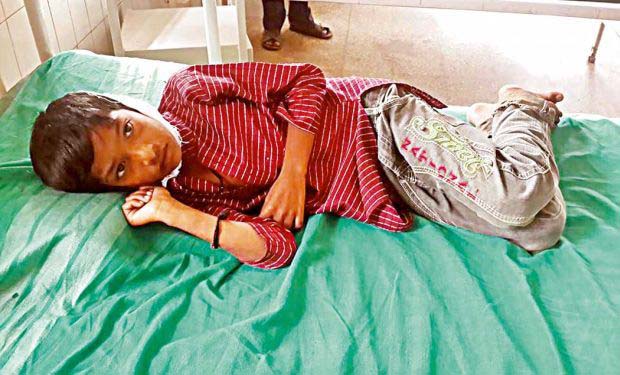 All of it had started on that Sunday when I went to play near the temple. All my friends are playing happily when we saw that the poojari of the nearby temple distributing prasadam to the people. We are all children and lot of playing made us hungry. So we all went to the poojari and stood there for the prasadam. Coming from play, our clothes are dirty. Not that they are otherwise clean because my father is not buying me a new dress for the last one year. Even this dussera he did not buy me a new dress. Seeing us, dirty, the poojari asked us where we are from. We said that we are from the nearby Jayanagar colony. Immediately, he started abusing us and started to go away. I did not understand why he was shouting at us. So I went behind him asking for prasadam as I am hungry. He suddenly started beating me. He catch my head and hit it hard to the pillars of the temple. I started crying, there is lot of pain in my head and I did not see anything after sometime. My friends said, after seeing me getting beatings, they ran to our houses and brought some of our elders. I don't know how much time I was sleeping, but when I wake up I am in the hospital. My mother was crying, my father was angry and I thought he will again beat me. But he did not on that day. He was angry.

The doctors tied a bandage to my head and said go and get some tests. My mother started even more crying. My head is having so much weight and I do not understand why mother is crying. She said the doctor asked my head to be photographed and it is very costly, she do not have that money. My father said we will talk with the police. I do not know that police will help in getting my head photograph. We all went to the police station. My father told the police about my head and my beatings. The police asked me lot of questions. They abused me and my father why I went to play near the temple and why I want to eat prasadam. My father is asking them to bring the poojari as he beat me, but the police are not listening to him. They are telling we are all liars and will not call the poojari as he is a good man. I did not understand, why the police are calling us liars and abusing us. I am talking truth and my head is bandaged, but they are not listening.

We went home. My mother is still crying, saying that she needs nearly Rs 3000 for getting my head photograph. I know that we do not have so much money. Some of the uncles and aunties from my colony had come to our house as their children and I are friends. They asked me and told my mother and father that all of them can go to the police and talk with them. All of them again went, but the police do not hear what they say. Some of the uncles went and told the TV people and some people who used to come with flags to our colony. The flag carrying uncles and aunties came and asked me what happened. TV people came and asked me what happened. From then, everybody is coming and asking me what happened. So many took my photographs. I asked my mother if that photograph will work, but she said no.

I am thinking what is happening and why is all this happening. First why did not the poojari give me prasadam. Am I wrong to ask for it? But he is giving it to others, why did he not give me? I remember, he asked me where I come from. Yes, he got angry on hearing where I come from. So what is wrong with my colony? We are also people. Same people as you. We too have two hands, two legs and one head. We are poor and dirty, but my father goes to work in the morning and comes back very late in the night. He is very tired after working and I know he works very hard. My mother too dos a lot of work. She cooks, washes, make me ready, take me to school and goes to other houses to work and comes in the evening. Even then we are poor. I don't know why? We are dirty, because we are poor. What can I do?

In my school every morning we do a pledge. “India is my country. All Indians are my brothers and sisters...” My books tell that all Indians are equal. But I know that it is wrong. There are rich and poor. Clean and dirty. Even if I take bath and wear new clothes, I am dirty it seems. I will always be dirty, it seems. The poojari was shouting this, when beating me. What is this dirty? When all are equal, I did not understand.

I have some big friends also. They told me afterwards. All of us are dirty because we are dalits it seems. I asked them what is this poojari? They said he is a brahmin and he is above all of us. We are at the bottom, they told. I do not know what is this top and bottom, but they said, we should not touch the poojari, that is the brahmin, we should not go to the temple, we should get up when somebody from the top comes, we should sit separately and all such things. I asked them why? They said it is like that from many years and their fathers told them that their fathers also did like this only. I was thinking, why is this like this? Is god like this? Did he really say some are clean, some are dirty, some are poor, some are rich, some are on top and some at bottom? If he said this, I do not think he will be God?

Some people said to me I am wrong, some said the poojari is wrong. Some said, the poojari and the police are wrong. Some said, the poojari, police and many people at the top and rich are wrong. I am thinking. The poojari ran away from the house after the police came to my house, my friends told me. So the police cannot call him. He ran away afraid. If he is not wrong, why did he run away? I did not run away. I am hungry and asked for prasadam. I am not wrong. I am thinking, what is wrong, what is right, what to do.

I remember my teacher telling a story from one textbook about Gandhiji. I know him very well, because he stands at the centre of the road, with a stick on a tall platform and we play round him. He is thrown out from a train because he is brown it seems. My teacher said he got angry and started calling all people to fight these people. And the white people went away from our country because of Gandhiji bringing all people in this fight. I remembered it. Gandhiji was brown he was thrown out. I am dirty, dalit, I am beaten. That is by white people and this is by Indian people. But both are wrong. If Gandhiji can fight, I will also fight.

My friends also showed me a man with a coat, a book in his hands and finger pointing towards our houses. He too is dirty like us it seems. He wrote the book in his hand, which all the country follows. He too was beaten, but he fight along with many people and become a big man.

The flag uncles and aunties also have some photographs of many people who are fighting. A school got a big prize, fighting very bad boys, they told me. Then everybody said, I am Malala, I am Malala, it seems. They say, if you want to live like people, you should fight. I am thinking. Will people come out saying I am Santosh. I am Santosh?